The following article was released by the Large Synoptic Survey Telescope (LSST) collaboration. In addition to helping guide the scientific mission of the LSST, Brookhaven National Laboratory leads the development of the CCD sensors, the array of precise and sensitive electronics that will capture images within the digital camera. For more about the project and Brookhaven's role, visit the Lab's LSST website. 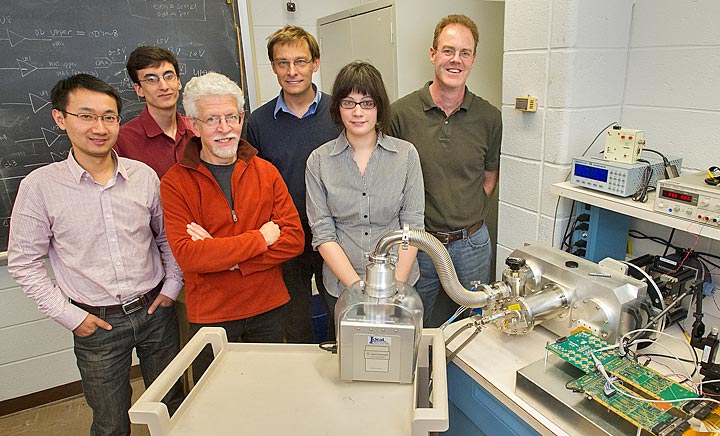 A far-flung team of Large Synoptic Survey Telescope (LSST) researchers has recorded a significant milestone in the development of the Raft Tower Modules, the core component of the camera focal plane. For the first time, a pre-production prototype of the 4K x 4K science CCD (charge-coupled device) sensor has been controlled and read out by a full "vertical slice" of the complete electronics chain.

What is the LSST?

The Large Synoptic Survey Telescope, a ground-based telescope designed to capture the entire night sky, will peer into space as no other instrument ever has. This new facility will offer an unparalleled wide-field astronomical survey of our universe – wider and deeper in volume than all previous telescopes combined. The combination of a 3200 megapixel camera sensor array, a powerful supercomputer, a cutting-edge data processing and distribution network, and a massive telescope stationed on a Chilean mountaintop will cast light on mysteries fundamental to our understanding of the universe. From the distant signatures of dark energy to the dangers of near-earth asteroids, LSST will capture it all.

Learn more at Brookhaven's LSST website and at the official home of the LSST collaboration.

The compact and low-power front end electronics are made possible by a custom-designed CMOS (complementary metal-oxide semiconductor) chip set designed by engineers at the IN2P3 labs in France and at the University of Tennessee. The other components of the electronics chain in this mini-systems test come from SLAC National Accelerator Laboratory (data acquisition system), Harvard University (digitizer boards), the University of Pennsylvania (front end analog boards), IN2P3 (firmware), and Brookhaven National Laboratory (cryostat, optics, systems integration, control software).

Leading up to this demonstration were many months spent designing, fabricating, and testing the individual components. The CCD, in particular, has been the focus of a seven-year development program with several manufacturers. The custom ASIC (Application-Specific Integrated Circuit) development started in 2007, and LSST will be the first astronomical camera to use ASIC-based readout. This gives LSST the highly parallel readout structure that enables the fast cadence on the sky, and at the same time provides a readout chain compact and low-power enough to be housed in a compact enclosure in the shadow of the sensor array.

The current test underway at Brookhaven Lab involves a single CCD in a small cryostat—designed to keep the sensor at cryogenic temperatures—and a 16-channel readout system at room temperature. The next steps will involve detailed analysis and optimization of the performance to meet the stringent requirements of LSST.

In the months to come, the work will continue with several planned revisions to the chips and boards. Then the team plans to expand the scope of the tests to include multiple CCDs, more electronics channels, enhanced software, and tests of the integrated thermal management system that maintains the CCD at a temperature of -100 degrees Celsius. By this phased development approach we will be able to exercise the full functionality of the science raft well in advance of building the first production unit.