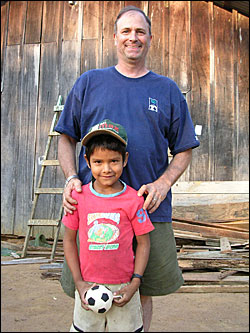 Most BNLers know Bob Selvey of the Safety and Health Services Division as the manager of the industrial hygiene group and one of the Lab's safety "gurus." But most of us don't know that in his spare time, Selvey has traveled to places like Honduras, Peru, and Brazil to build bridges and orphanages, and provide other services to help improve the quality of life for people in those countries.

This past July, Selvey, his wife, and other volunteers from his church, Smithtown Gospel Tabernacle, traveled to the Amazon River valley in Brazil to help build a bridge over a creek bed so that the local Indian tribe would be able to travel to town during the rainy season to sell their crops and buy supplies. Until now, the tribe was mostly cut off from civilization during the rainy season. In the past, wooden bridges from felled trees were constructed, but they washed away each year. Selvey and his crew helped build a concrete bridge that will hopefully last a long time and provide the members of the tribe with an easy path for travel.

Selvey said that he not only finds these trips rewarding and educational, but they remind him of how fortunate he is to be from a country like America. "After sleeping in hammocks, taking cold showers, and only having electric power for a couple of hours each day, I return home and appreciate even the simple conveniences, most of which we take for granted. When I experience the lives of people in developing regions, it also helps me to keep things at work and in my personal life in perspective," he said.

In addition, Selvey said that getting to spend time with the local people is very satisfying. "They are friendly and appreciative, but what I really enjoy is the interaction with the kids." Selvey said he got to interact with many of the local children in Brazil because the kids were fascinated with the foreigners who spoke a funny language. They were always close by watching and giggling. One particular kid stood out from the others. His name was Matutu. Matutu would join the crew to work on the bridge each day, handing them tools, pulling nails from boards, hammering nails like a pro, and helping in any way he could. "I soon realized that he would mimic everything I said perfectly, even though he didn't know what the words meant. So I started talking to him in rhyming words, and he responded with a huge smile and a near perfect imitation. It was truly amazing. He did know the meaning of one word, 'Coca-Cola,' which made him really laugh."

"On each trip, in just a few days, the people, especially the kids, really win a place in your heart and it is really hard to leave and return home," added Selvey.

What's next for Selvey and his fellow volunteers? He is hoping to raise funds for himself and his wife to travel with a mission group from the church that is going to Africa next year.

In the meantime, Selvey will spend his time leading the team that monitors Lab employees for exposure to chemicals, noise, natural hazards, heat stressors, biohazards, and non-ionizing radiation. "My first priority is to help keep BNLers safe," he said.