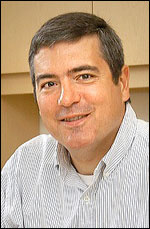 Bring on the sunshine! April showers are behind us and the sun is shining a little longer each day in the northern hemisphere. That means the 200-acre Long Island Solar Farm (LISF) at Brookhaven Lab is producing increasing amounts of renewable energy for Long Islanders and data for our researchers.

The LISF is the largest solar array in the eastern U.S. and is located at the east end of the Lab site. It contains 164,312 photovoltaic panels grouped and mounted onto more than 6,800 racks. The LISF can produce peak power output of 32 megawatts (MW) of alternating current that powers homes and businesses. Operations began in November 2011, and during its first 12 months, the LISF produced a total of about 54,000 megawatt-hours (MWH) of energy. That's 23 percent more than the design estimates for 44,000 MWH, which is equivalent to the power usage for about 4,500 homes. 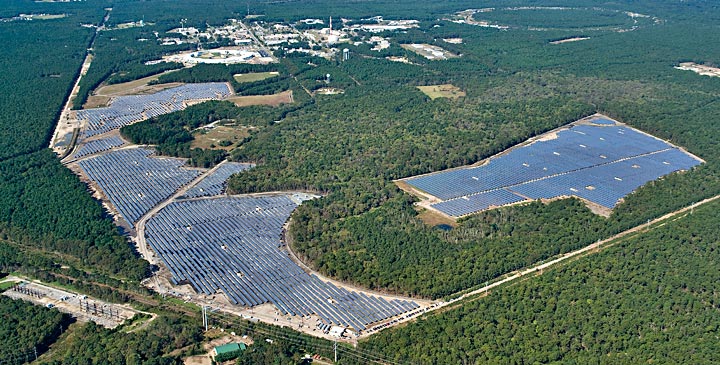 The 200-acre Long Island Solar Farm (LISF) is located at the east end of Brookhaven Lab. By hosting the LISF and future Northeast Solar Energy Research Center on site, Brookhaven Lab has positioned itself at the forefront of new research to help develop real-world solar energy technologies.

LISF, LLC—a joint venture between BP Solar and Met Life—owns the array and LIPA purchases the electrical output, distributes it, and sells it to customers. BP Solar has announced its intention to exit the solar energy business and we expect it to sell its share to another party, but this would not affect operations or agreements with Brookhaven and the U.S. Department of Energy (DOE). While the Laboratory doesn't get any electricity from the LISF, it does get large amounts of data from operations. The Lab will get both electricity and research data from the Northeast Solar Energy Research Center (NSERC) being developed on site. By hosting both arrays here, the Lab has positioned itself at the forefront of new research to help develop real-world solar energy technologies.

Data Streams From the Solar Farm 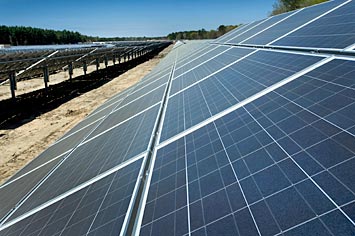 Some of 164,312 photovoltaic panels at the Long Island Solar Farm (LISF). During the first 12 months, the LISF produced a total of about 54,000 megawatt-hours (MWH) of energy—23 percent more than design estimates for 44,000 MWH, which is equivalent to the power usage for about 4,500 homes.

As power is produced at the LISF, our researchers collect large amounts of data that stream in from sensors and imagers installed across the array. The data include measurements such as the amount of sunlight illuminating the array; the electrical output at each of 25 inverter stations, where the sun's direct current is converted to the alternating current that we all use; as well as clouds' positions as they drift across the sky, altering the amount of sunlight that reaches the panels and the associated power they produce.

We now have datasets to forecast the LISF's near-term output, ranging from seconds and minutes to maybe as far out as one hour. Developing models to forecast output 24 hours out is still a big challenge, and this will become increasingly important as we work to integrate more renewable, intermittent power sources. Researchers in Brookhaven's Environmental, Biological, and Computational Sciences Directorate are working with the National Center for Atmospheric Research to develop advanced forecasting models and techniques through a recently awarded grant from the DOE.

Tim Green and his colleagues in the Environmental Protection Division are using standard wildlife survey techniques for research on how the solar array impacts wildlife and the ecosystem. The tall fence surrounding the LISF has openings along the ground, so raccoons, foxes, groundhogs, and other animals can come and go, while the deer population is kept out. Cameras are in place along openings in the fence to see what animals stroll in and out. Native grasses have been planted at the facility, and native blueberry and huckleberry plants were left in place during construction, to provide food and habitat for the native wildlife and birds, but not for plundering deer herds. Researchers are also conducting surveys to determine which reptile and amphibian species are using the facility and biologists are tracking 26 eastern box turtles to determine whether the turtles are using the area or avoiding it.

Lightning has dealt the LISF its worst damage. During a storm in June 2012, lightning struck, causing a partial outage and damaging approximately 240 panels in the array and other related equipment. The system was repaired quickly using spare panels on hand.

A Research Array for Our Own Use

The future NSERC solar photovoltaic research array will be a one-MW facility that can provide the Laboratory with some of the electricity required for ongoing operations. It will be located along Brookhaven Avenue across from the National Synchrotron Light Source II. There, researchers will have the opportunity to test new energy technologies—such as smart-grid ready inverters, energy storage devices (e.g. batteries) that integrate with the grid, and solar panels made from different materials. Preparations at the NSERC site are now complete and a vendor will be selected soon with plans for construction to be completed this year.

All of this exciting research and the applications developed contribute to the Lab's larger strategy for 21st Century Energy Security. This requires cooperation and teamwork among LIPA, our industry partners, and many at the Lab, including members of the Environmental, Biological and Computational Sciences; Facilities & Operations; and Global and Regional Solutions Directorates; as well as the Environmental Protection, Information Technology, and Procurement & Property Management Divisions, and the DOE Brookhaven Site Office.

Enjoy the sunshine in the coming months—the researchers at Brookhaven and our collaborators certainly will.