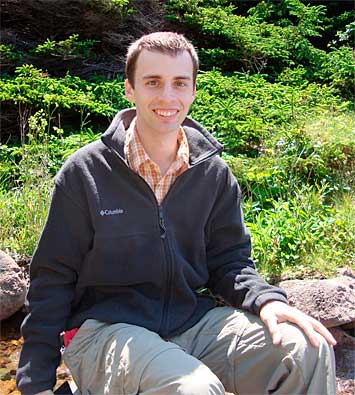 Jarrett Moyer, a postdoctoral research associate at the University of Illinois, is this year's recipient of the Julian Baumert Ph.D. Thesis Award. Moyer was selected for leading a Yale research team using beamline U4B at the National Synchrotron Light Source (NSLS) for in-depth exploration of spin-polarized materials for spintronics applications.

The Baumert Award is given to a researcher who has recently conducted a thesis project that included measurements at NSLS. It was established in memory of Julian David Baumert, a young Brookhaven physicist who was working on x-ray studies of soft-matter interfaces at NSLS before he died in June 2006.

Moyer joined Henrich's group as they were beginning a program on the electronic and magnetic properties of non-stoichiometric, iron-doped cobalt ferrite. Needing to do spin-resolved measurements, Henrich and Moyer applied for beamtime at NSLS to do various soft x-ray spectroscopies, including x-ray absorption spectroscopy, and x-ray magnetic circular and linear dichroism.

In his letter of recommendation, Henrich said, "Jarrett performed a variety of measurements on U4B over the course of three years; he was the lead Yale researcher on that program. While he and I jointly wrote the initial beam line proposal, Jarrett essentially wrote all subsequent continuation proposals. The nature of our U4B measurements evolved over the three years, and Jarrett had a major part in determining what experiments to do; some of them were entirely his idea. The knowledge obtained from the measurements on U4B was integral to understanding the electronic and magnetic structure of the individual cations, information that cannot be determined without these techniques. While the electronic properties change systematically with x, the magnetic properties change non-linearly. This non-linear behavior is surprising and will hopefully lead to future research into modulating the magnetization of Fe-doped Co1-xFe2+xO4 by making small changes in the electronic properties, ideally through well-known techniques such as electric field gating."

According to Henrich, Moyer worked with Photon Sciences physicist Dario Arena to solve several technical problems. Some of the work Moyer did contributed to the beamline development proposal for a new soft x-ray spectroscopy beamline that was submitted to NSLS-II.

"I have learned a lot of physics from him," wrote Henrich. "Jarrett has all the attributes of a truly excellent scientist."

The Baumert Award was presented on May 21 during the 2013 NSLS/CFN Joint Users' Meeting. Moyer received a $600 honorarium and travel arrangements to the meeting, where he gave a 15-minute presentation on his thesis work. His name will be engraved on a plaque in NSLS.