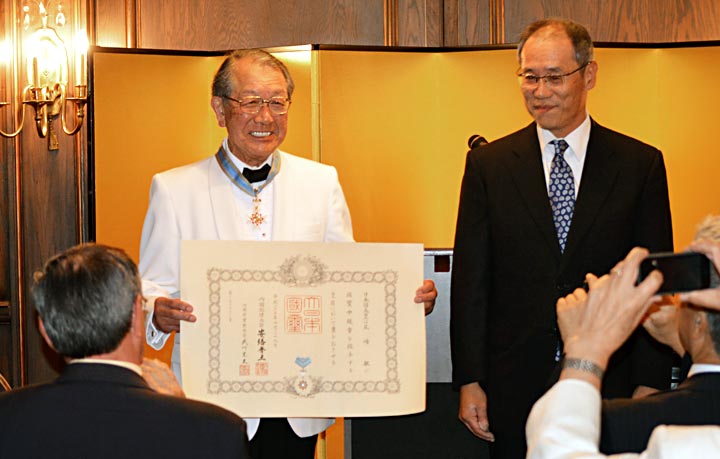 At a ceremony held at the official residence of the Japanese ambassador in New York City on July 5, Brookhaven National Lab’s (BNL) Senior Scientist Emeritus Satoshi Ozaki received Japan’s prestigious Order of the Sacred Treasure, Gold Rays with Neck Ribbon. Emperor Akihito of Japan conferred this decoration, presented by Acting Consul General Fumio Iwai, to recognize Ozaki’s outstanding contributions in physics through high-energy and nuclear physics studies, and his significant contributions to the promotion of Japan-U.S. cooperation in physics.

A news release issued by the Japan Consulate General said, “There is no doubt that his [Ozaki’s] outstanding contribution is to the design and construction of accelerators that has led to the realization of major machines for fundamental science on two continents, and his promotion of international collaborations. Through outstanding efforts like these, for more than 30 years, Dr. Satoshi Ozaki has made important contributions to the level of mutual understanding and friendship in exchange of science and technology shared between the people of Japan and the United States.”

During the ceremony, former Brookhaven Physics Department Chair Thomas Ludlam spoke of Ozaki’s accomplishments and Osamu Shimomura, director of the Washington D.C. office of the Japan Society for the Promotion of Science, raised a toast to honor Ozaki.

“I am very much honored and grateful to the Government of Japan for its recognition of my contributions to the advancement of science and deepening of mutual understanding and friendship between Japan and the United States,” Ozaki said. “There have been many people behind these achievements and I would like to express my sincere gratitude for their thoughtful support.” 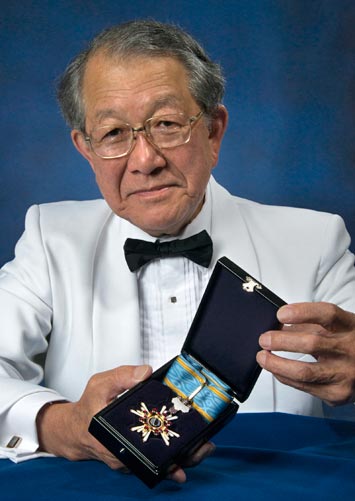 Satoshi Ozaki with the prestigious Order of the Sacred Treasure, Gold Rays with Neck Ribbon, that was bestowed on him by the Japanese government for his outstanding contributions in physics through high-energy and nuclear physics studies, and his significant contributions to the promotion of Japan-U.S. cooperation in physics

Ozaki joined Brookhaven Lab in 1959 with a master's degree in physics from Osaka University, Japan, and a Ph.D. in physics from the Massachusetts Institute of Technology. His work in experimental particle physics and large scale detector development at Brookhaven led to a 1981 invitation from the National Laboratory for High Energy Physics, KEK, in Japan to direct the construction of TRISTAN, the first major high-energy particle collider in the country. Under Ozaki, this $500-million project was completed on time and within budget to start operations in 1987, accelerating and storing beams of electrons and positrons at 30 billion electron volts—the highest energy in the world at the time.

Since 1978, Ozaki has been involved in the initiation and oversight of the Agreement on High Energy Physics between the Japanese and U.S. governments. He also organized a symposium that took place in October 2010 in Hawaii to celebrate the 30th anniversary of this highly fruitful program.

Ozaki returned to Brookhaven in 1989 to head the Relativistic Heavy Ion Collider (RHIC) project. RHIC is a 2.4-mile-round collider that researchers use today to smash atomic particles together to understand more about why the physical world works the way it does. Under Ozaki’s leadership, the RHIC project was completed without delay and the first collisions there occurred in 2000. Ozaki was essential in securing Japanese support for RHIC-related projects, including the PHENIX experiment as well as the partnership between RIKEN—Japan’s Institute of Physical and Chemical Research—and Brookhaven for the RIKEN BNL Research Center (RBRC), where physicists from RIKEN, BNL, and many other institutions around the world have worked together since 1997 to understand more about the building blocks of the universe and their origins.

In 2005, Ozaki joined the National Synchrotron Light Source II (NSLS-II) project to lead construction of this future facility at Brookhaven. NSLS-II is designed to deliver world-leading intensity and brightness, x-ray beams more than 10,000 times brighter than the current NSLS. He helped organize efforts to advance designs for the facility’s accelerator systems, and with operations scheduled to begin in 2015, Ozaki continues to work on the NSLS-II project even after formally retiring on December 31, 2012.