He turned 70 this month, but Brookhaven Police Officer John Pagano will be the first to tell you that age is just a number. While approaching one of the Lab's security gates, you can usually tell, or rather hear, if Pagano is on post. As a fan of everything from Frank Sinatra to 50 Cent, beats of hip-hop and techno usually escape from Pagano's booth as he claps and cheers for entering employees and visitors. 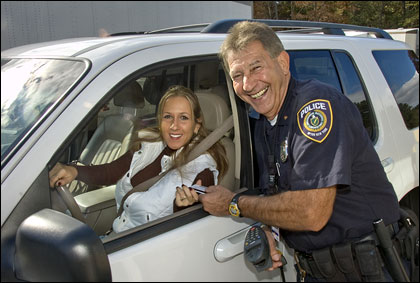 His hope is that they'll enter with a smile.

After working in the New York City Police Department from 1961-82, Pagano, better known to some as "Cuz," joined BNL's Safeguards and Security Department in 1990. As the oldest member of the force, Pagano continually passes his yearly police fitness test, which includes running a half-mile in less than 4:40 and sprinting a 40-yard dash from a prone position in less than 8.5 seconds. He also undergoes a biannual shooting qualification test.

A father to four and grandfather to 14, Pagano jokes that he strives to be an "aging Rambo."

"There aren't many people doing police work at my age," he said. "You've got to be young in the mind but also mentally tough. It doesn't matter if you're 40, 50 or 70, you've got to go with the times."

And go with the times he does. The self-proclaimed "long-suffering Jets fan" likes to jog, visit nightclubs, and ballroom dance - a recent activity he's picked up to become "sophisticated with old age."

But Pagano says his positive outlook didn't develop without some heartbreak. A string of family illnesses, including leukemia and liver cancer, has opened his eyes to what's really important.

"Who said life's fair?" Pagano said. "Life's not always fair, and if you went to a veterans' hospital or a cancer hospital, you'd probably say, 'My life's not that bad.' That's why you have to appreciate what you have and have fun doing it."