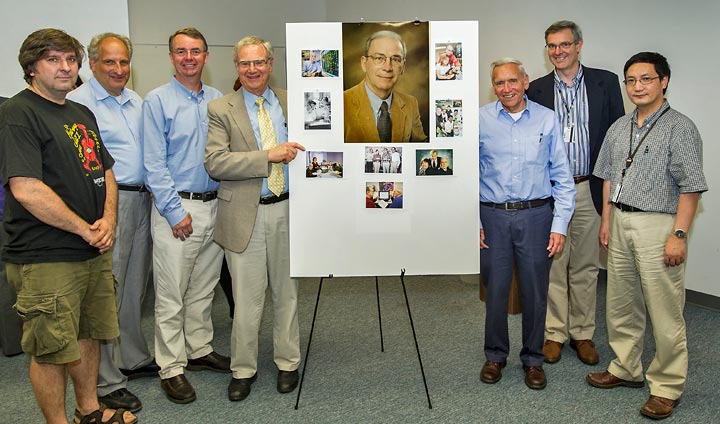 Employees, past and present, together with family and friends of the Biosciences Department, gathered last week to dedicate their main conference room to their colleague, the late John Dunn. A plaque inscribed “John Dunn Seminar Room” now graces the entrance and serves as a reminder of a colleague whose wide-ranging curiosity stimulated many illuminating discussions at seminars in this room.

Dunn passed away last year after a long battle with cancer. He carried out cutting-edge research in enzymology and molecular biology at BNL for 40 years and was recognized around the world for his ground-breaking contributions, including:

“John Dunn was a highly accomplished scientist who was filled with enthusiasm,” said BNL scientist William Studier, a long-time collaborator. “John had an insatiable scientific curiosity and passion for discovery. When he got interested in something, he pursued it fearlessly and tenaciously. He was an energizer for the whole department.” 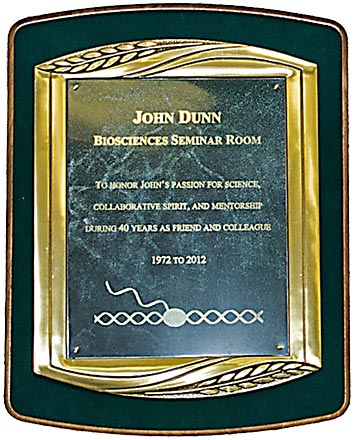 Benjamin Luft, a professor at Stony Brook University (SBU) who collaborated with Dunn in work on the Lyme disease bacterium, recited lines from the poem, “He Wishes for the Cloths of Heaven,” by William Butler Yeats that reminded him of his esteemed colleague. “Although this is more of a love poem, it reminded me of John,” said Luft. “After all, his life was about love – love of his family and his love for science that helped make our world a better place.”

BNL biochemist John Shanklin also worked closely with Dunn. “He had a keen sense of humor, and his intellect and spirit of interaction will live on well into the future,” said Shanklin. “He showed us that open and honest discussions often stimulate new ideas that neither person would have come up with individually. He was an extraordinary scientist, mentor, and friend.”

In addition to dedicating the conference room to Dunn, the attendees celebrated the establishment of the “John Dunn Award for Excellence in Life Sciences.” The award recognizes SBU graduate students doing their thesis work at Brookhaven Lab with a focus on biosciences.

This year’s award recipients are: