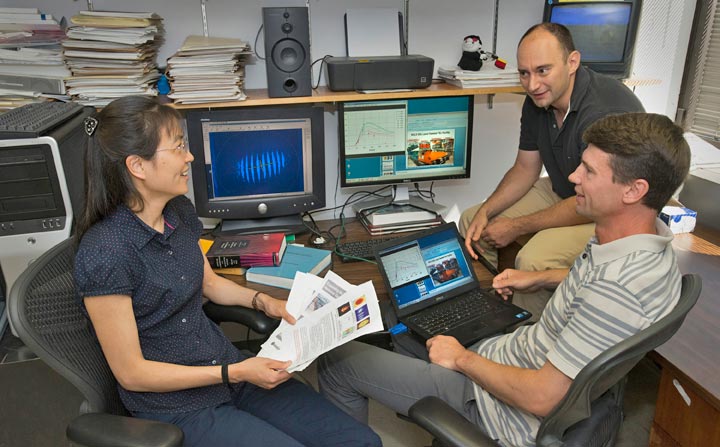 Designing accelerators requires years of research and development. Throughout the Lab’s history, scientists and engineers at Brookhaven have helped lead the way in designing accelerator technologies for cutting-edge facilities here on site and at institutions around the world.

Our team in the Photon Sciences Directorate and Yuzhen Shen, who is now with the U.S. Patent and Trademark Office, recently tackled a significant problem in accelerator design, a phenomenon called “microbunching instability” that has been identified as one of the most serious challenges to the performance of advanced linear accelerator (linac)-based light sources.

A Bit About Light Sources and Microbunching

Light sources, including the National Synchrotron Light Source (NSLS) and the future NSLS-II at Brookhaven, are important tools for producing ultra-bright light that scientists can use to analyze the atomic and molecular structures for advances in different areas of science, ranging from biology and physics to chemistry and geophysics, as well as medicine and materials science. Some light sources are linac-based and others, such as NSLS and NSLS-II, are based on storage rings. In both kinds, the bright light—large quantities of photons—is produced from electron beams that travel in bunches through certain accelerator components, for instance bending magnets or undulators.

Electrons are never distributed completely evenly inside a bunch and any small “noise” in an unstable bunch can cause the electrons to form microstructures as they clump closer or spread further apart. This effect, the microbunching instability, results in chaotic changes of beam density distribution. In extreme cases, especially for more intense bunches that provide higher brightness at light sources, bunches simply split apart. This effect degrades the quality of electron beams and the photon beams they produce.

The microbunching instability is rather common and especially important in the fourth generation light sources, such as the Linear Coherent Light Source at SLAC National Accelerator Laboratory in California. They rely on short-wavelength free electron lasers (FELs) that use short, dense bunches of electrons traveling at nearly the speed of light to make short photon bunches.

Recently, a lot of research has been completed to address the microbunching instability, but thorough understanding had not been achieved, mainly because experimental data was scarce and inconclusive. This isn’t surprising. Noise is impossible to control, so any phenomenon that initiates from it is hard to study experimentally. Measurable effects such as the final shape of an electron bunch could vary wildly from one bunch to the next. 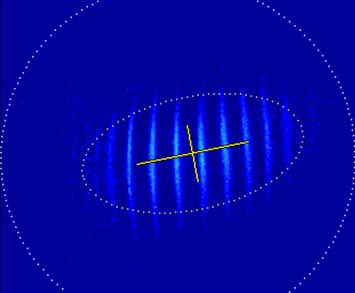 An electron bunch, as seen on the spectrometer screen. By controlling the microbunching instability, this bunch is completely split into about 10 sub–bunches spaced 25 micrometers apart. The ability to control the number of sub-bunches, the distance between them, and their intensity could be beneficial for a number of light sources.

In our recent work, performed at the NSLS Source Development Laboratory photoinjected linac, we used a novel technique to overcome this challenge. By pre-shaping the electron clumps inside a bunch in a controlled fashion, we were able to “seed” the instability and then study how it developed. With this technique, we were able to—for the first time—systematically characterize the microbunching instability and validate important theoretical predictions. Furthermore, our results suggested approaches for designing an accelerator that suppresses this instability, even for very intense bunches in which the effect is more likely to degrade the quality of both electron beams and the light they emit.

Perhaps even more interesting, we showed that modern linac-based light sources could actually benefit from microbunching instability. This is something the accelerator physics community has contemplated, but it wasn’t demonstrated until now.

There are other techniques to divide the bunch into a specific number of sub-bunches and set the distance between them, but we were the first to show that this could be done more efficiently by making use of the instability (see a divided bunch in the accompanying image). Our method of seeding the instability allowed us to increase the sub-bunch’s charge while reducing the minimum distance between them.

At longer wavelengths that can be produced at light sources—for instance for terahertz light—photon bunches repeat the shape of electron bunches, so this “tunability” allows us to tailor photon pulses according to users’ demands. At the x-ray end of the light spectrum, the ability to control the electron bunch shape increases the tunability of FEL-based light sources, so, simply speaking, we can change the color of photons to increase the range of experiments possible using the same accelerator.

These are exciting results. They demonstrate how the detrimental microbunching instability phenomenon can be used to our advantage to improve the performance of linac-based light sources and enable more great science in many different fields. The paper describing our research was published in Physical Review Letters on July 19, 2013. This work was supported by the U.S. Department of Energy Office of Science.