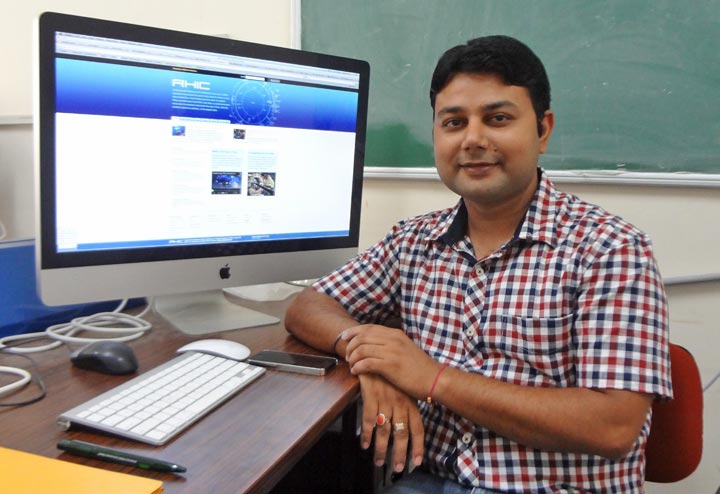 Lokesh Kumar recently joined the National Institute of Science Education and Research (NISER) in India. He is an active participant in the STAR experiment at Brookhaven National Laboratory’s Relativistic Heavy Ion Collider (RHIC) and the ALICE experiment at the Large Hadron Collider (LHC). Both experiments study the subatomic particle “debris” emerging from light-speed collisions of heavy ions to get clues about what matter was like at the dawn of time. Kumar’s training for this work began right here at Brookhaven, as a graduate student and then a postdoctoral fellow from Kent State University working at STAR.

"RHIC and LHC's ALICE experiment are complementary, helping us explore the full range of the ‘nuclear phase diagram’—a map of what happens over a range of collision temperatures and densities.”

“I was stationed at Brookhaven to work on the RHIC beam energy scan program, which looks at how conditions created in heavy ion collisions change by varying the energy of the colliding beams over the broad range accessible at RHIC,” he said. This versatility allows scientists to explore the transition of matter from ordinary atomic nuclei made of protons and neutrons to the 4-trillion-degree “soup” of their constituent particles—quarks and gluons—as they last existed at the beginning of the universe some 13.8 billion years ago. The goal is to better understand how this “quark-gluon plasma” evolved as the real universe cooled and condensed to form 99 percent of the visible matter that exists today—including all stars, planets, people and so on—and to search for a so-called “critical point” at which the transition between these different forms of matter moves from continuous to sudden.

“I stayed at Brookhaven for three years, from January 2010 to June 2013, which gave me the chance to discuss this research with experienced scientists and experts, greatly expanding my understanding about this field,” Kumar said.

Collisions at the LHC’s ALICE experiment occur at much higher energies than RHIC—consistently creating the quark-gluon plasma of the early universe—while RHIC can explore the energy “region” closer to and on either side of the transition.

“The two experiments are complementary, helping us explore the full range of the ‘nuclear phase diagram’—a map of what happens over a range of collision temperatures and densities,” Kumar said. “At NISER, I am one of the core members of the beam energy scan program searching for the critical point and the phase boundary to better understand the phase diagram.”

“Here in India, we are very optimistic about the success of the RHIC beam energy scan program. Already, it has provided valuable information about particle production in heavy-ion collisions and also shown different behavior for some observables when the beam energy is lowered. Possibly we will find the signatures for the critical point and the phase boundary.”

With such information, he said, our understanding of the phases of nuclear matter might be brought to the level at which we understand the phases of more familiar substances like water, where the underlying interactions are electromagnetic rather than at the level of quarks and gluons. That understanding would make the mysteries of the early universe a bit less mysterious to us all—and who knows where else it could lead?