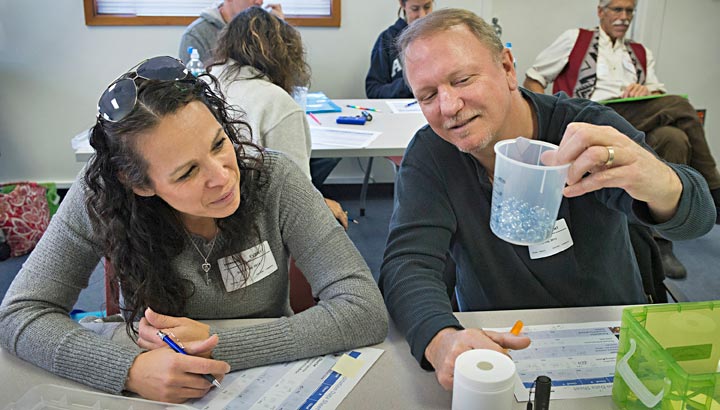 With students off from school for Election Day, Nov. 5, 130 teachers from Nassau, Suffolk, and Queens took a field trip to Brookhaven Lab for the second-ever Sci-Ed Day. While on site, the teachers participated in science workshops, toured the Lab’s research facilities, and learned about new ways to connect themselves and students with high-tech companies on Long Island.

Sci-Ed Day for teachers was organized by the Portal to Discovery, a collaboration between Brookhaven Lab and the Long Island Matrix of Science and Technology.

The event kicked off in the lobby of Berkner Hall, where teachers met members of the Long Island STEM Hub regional industry councils, who work to develop Long Island’s workforce to sustain regional economic growth and vitality. The representatives discussed opportunities such as internships and job “shadowing” for teachers and their students in industries including aerospace, energy and environment, engineering, healthcare and life sciences, information technology, and manufacturing. 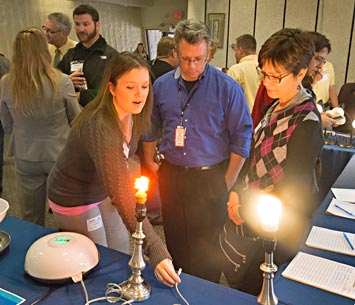 The UFO-shaped pod (lower left corner) monitors devices' electricity usage and uploads data via a Wi-Fi network. Students in the William Floyd School District are using this device and an iPad app to learn about energy efficiency and managing power consumption.

Teachers also saw and participated in demonstrations for class science activities, including one project that involves plugging electronic devices into a UFO-shaped pod that monitors electricity usage and uploads data via a Wi-Fi network. Students in the William Floyd School District are using this device paired with an iPad app to learn about energy efficiency and managing power consumption.

While welcoming the teachers, Director of Communications for the Department of Energy (DOE) Brookhaven Site Office John Carter said, “The DOE laboratories, including Brookhaven Lab, provide programs for more than 22,000 educators and 250,000 students from kindergarten to grade 12. That’s a lot of curious minds and dedicated educators. You are the critical component in all of this and it’s wonderful to have you here today.”

Ken White, manager of the Lab’s Office of Educational Programs and founding director of the Portal to Discovery, said, “You’re on the front line getting kids on Long Island excited about careers in science, technology, engineering, and math—and we’re excited that you’re taking part in this here today.”

“We want to give you the opportunity to pursue your passion for science, so you can connect your students to science, technology, engineering, and math,” said Harriet Copel, executive director of Long Island Matrix of Science and Technology.

Then, teachers climbed aboard a bus that took them to workshops on topics ranging from the recent Nobel Prize-winning discovery of the Higgs particle, to nanotechnology and how scientists are building components for the Large Synoptic Survey Telescope that researchers will use to explore the universe, dark matter, and dark energy. The workshops and session leaders—both educational and scientific staff—included:

“Thanks to our session leaders, the teachers left Sci-Ed Day really understanding and appreciating the research here at Brookhaven,” said Aleida Perez of the Office of Educational Programs, pointing to surveys the teachers completed. “The teachers are eager to come back to the Lab—and we look forward to having them back too.”