Neerav Kharche of Brookhaven Lab's Chemistry Department presents his research during a poster session at the 2013 Young Researcher Symposium.

Approximately 300 up-and-coming young researchers collaborating on groundbreaking research at Brookhaven Lab gathered in Berkner last month for the second-annual Young Researcher Symposium. Primarily postdoctoral researchers—“postdocs” who earned a Ph.D. within the past five years—and students working toward masters’ degrees or Ph.D.s, the attendees heard talks from established scientists and 68 presented their own research during this daylong event on Nov. 15.

“Young researchers need professional development and inspiration to have successful, fulfilling, and exciting careers—that’s the exact reason we’ve hosted this symposium the past two Novembers and are already looking forward to the next in 2014,” said Diane Zhong of the Lab’s Chemistry Department, one of the symposium coordinators.

Fellow coordinator Joseph Brady of the Nonproliferation and National Security Department added, “With help from lots of people at Brookhaven Lab, we hosted this to showcase the exciting work young researchers are doing here and to provide them with an opportunity to hone their presentation skills. The symposium talks were well attended, the poster session was packed, and based on the survey results, I’d say we accomplished our goals.” 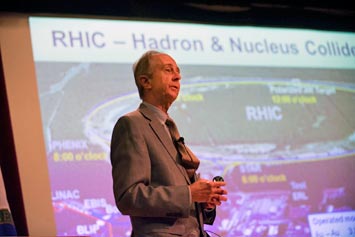 The symposium began in Berkner Hall as Associate Laboratory Director for Nuclear and Particle Physics Berndt Mueller welcomed attendees and offered his outlook for the future of nuclear and particle physics. He ended his talk providing attendees four pieces of advice: have a dream; do only what you can fail doing, because you learn from failing; pick good mentors who can offer objective guidance; and be safe—for the sake of yourself, your family, and your coworkers.

Registrants then left the auditorium for presentations in rooms A, B, and C.

What’s ‘Impossible’ for a Postdoc? 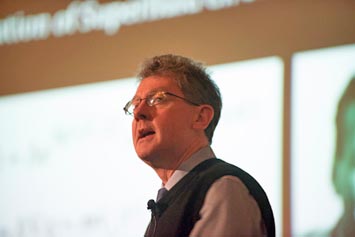 As attendees returned to the auditorium, Séamus Davis spoke next. He is a senior physicist in Brookhaven Lab’s Condensed Matter Physics & Materials Science Department and the J.G. White Distinguished Professor of Physics at Cornell University. During his talk, titled “That’s Impossible,” Davis discussed his experiences as a researcher investigating the mysteries of superconductivity—a phenomenon in which certain materials can conduct electricity without any electrical resistance or energy lost.

When choosing a research problem to pursue, Davis advised, address a problem that is important to you, your colleagues, and the world, but considered impossible—only because others haven’t figured out the answer or the method to acquire it. He also advised choosing a problem that has consequence and is compelling; and to be on the lookout for solutions that are clear and simple, despite the problem’s complexity. 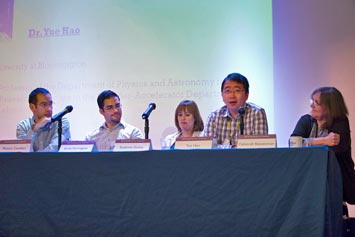 Next, Matteo Cavalleri of the Journal of Quantum Chemistry joined BNL alumni Jaime Farrington; Suzanne Golisz, who helped organize the 2012 Young Researcher Symposium; Yue Hao; and Deborah Keszenman—each a former researcher, postdoc, or intern at the Lab—to answer questions about their work experiences in different science-related careers. Some topics they discussed included resources that the Lab provides to help in finding jobs, skills their current positions require, and specifically, which skills acquired while earning a degrees or as a postdoc have been particularly useful. 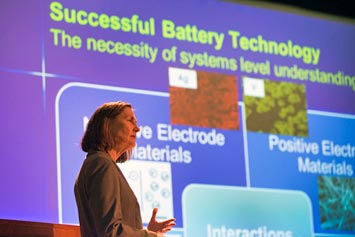 Following lunch and a second round of attendees’ presentations, Esther Takeuchi— chief scientist for Brookhaven Lab’s Global and Regional Solutions Directorate and a SUNY distinguished professor for Stony Brook University’s Materials Science and Engineering and Chemistry Departments—gave the keynote address about her research for better batteries, including one that powers implantable cardiac defibrillators that help prevent heart attacks.

“All of us want to make impacts scientifically, but I think there’s also opportunity to go beyond that and make impact in a technological sense,” Takeuchi said.

A Message From the Director 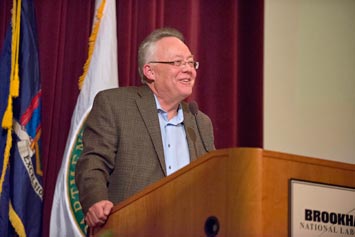 “This gives us a chance to see just how exciting our Laboratory really is and how broad the reach really is—it’s exciting, it’s amazing. And it’s especially enjoyable by virtue of the fact that it was driven by younger researchers at Brookhaven,” Gibbs said.

“Postdocs and students—the whole younger generation at the Lab—are the lifeblood of our Lab. You all are the source of our energy and our drive,” Gibbs added. “You offer fresh and new viewpoints. You ask questions and you solve problems.” 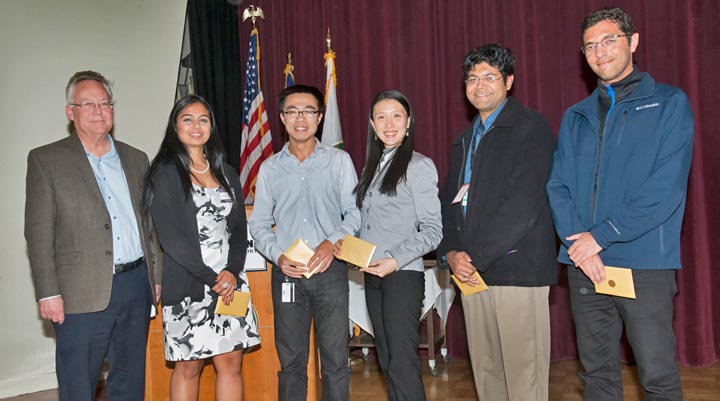 Before concluding the symposium, Gibbs announced the oral presentation and poster contest awardees. Brookhaven scientists—including department chairs—selected awardees for their impactful, well-communicated science. They were:

The Director’s Office at Brookhaven Lab was the founding sponsor for the 2013 Young Researcher Symposium.

Platinum-level sponsors for the symposium were:

Silver-level sponsors for the symposium were: