Tiny Drops of Hot Quark Soup—How Small Can They Be? 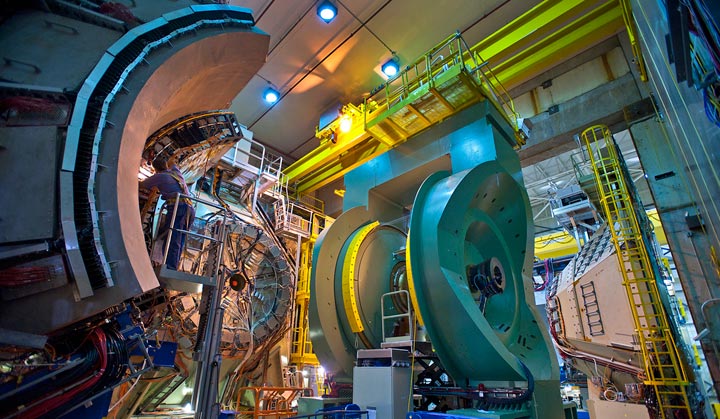 Components of the PHENIX detector at Brookhaven's Relativistic Heavy Ion Collider (RHIC). PHENIX weighs 4,000 tons. It has large steel magnets and a dozen detector sub-systems that bend and track a wide range of particles while measuring their properties (e.g., momentum and energy) as they emerge from collisions.

Scientists designed and built the Relativistic Heavy Ion Collider (RHIC) at the U.S. Department of Energy’s Brookhaven National Laboratory to create and study a form of matter that last existed a fraction of a second after the Big Bang, some 13.8 billion years ago. The early-universe matter is created when two beams of gold nuclei traveling close to the speed of light slam into one another. The high-speed particle smashups pack so much energy into such a tiny space that the hundreds of protons and neutrons making up the nuclei “melt” and release their constituent particles—quarks and gluons—so scientists can study these building blocks of matter as they existed at the dawn of time.

Collisions between gold nuclei and deuterons—much smaller particles made of just one proton and one neutron—weren’t supposed to create this superhot subatomic soup known as quark-gluon plasma (QGP). They were designed as a control experiment, to generate data to compare against RHIC’s gold-gold smashups. But new analyses indicate that these smaller particle impacts may be serving up miniscule drops of hot QGP—a finding consistent with similar results from Europe’s Large Hadron Collider (LHC), which can also collide heavy nuclei.

“Considering that the quark-gluon plasma we create in gold-gold collisions at RHIC fills a space that is approximately the size of the nucleus of a single gold atom, the possible hot spots we’re talking about in these deuteron-gold collisions are much, much smaller—and an intriguing surprise.”

“Considering that the quark-gluon plasma we create in gold-gold collisions at RHIC fills a space that is approximately the size of the nucleus of a single gold atom, the possible hot spots we’re talking about in these deuteron-gold collisions are much, much smaller—and an intriguing surprise,” said Dave Morrison, a physicist at Brookhaven and co-spokesperson for RHIC’s PHENIX collaboration. The collaboration describes their results in two papers just published by Physical Review Letters, one of which is highlighted by the journal.

The findings at RHIC and the LHC have triggered active debate about their interpretation. Said PHENIX co-spokesperson Jamie Nagle of the University of Colorado, “There isn't yet universal agreement about what we’re seeing in these small systems, but if indeed nearly perfect fluid droplets of quark-gluon plasma are being formed, this may be a perfect testing ground for understanding the essential conditions for creating this remarkable state of matter.”

The PHENIX scientists’ evidence for the possibility of tiny hot spots comes from taking a closer look at data collected by their namesake detector, one of two large particle trackers at RHIC, during deuteron-gold collisions in 2008. The group was inspired to conduct a new analysis after hints of QGP-like behavior emerged from similar control experiments in the heavy-ion physics program at the LHC.

When not searching for particles such as the Higgs boson, the LHC spends a few weeks during each experimental run colliding beams of lead nuclei to create and study QGP at higher energies than RHIC, using protons instead of deuterons for its control experiments. In those control collisions (between lead nuclei with protons and also in some collisions of protons with protons), LHC scientists observed certain “signatures” that were surprisingly reminiscent of those generated by QGP—namely similar patterns of particle production and correlations in how particles flow out of the collisions.

When PHENIX physicists took a closer look at their data from deuteron-gold collisions at RHIC, they saw the same telltale effects.

This animation shows how hot spots (red) created in a deuteron-gold collision—formed from the impact of the deuteron's proton and neutron with the gold nucleus—evolve into cooler matter that flows out to the sides. This small scale flow is similar to the dramatic elliptical particle flow observed in gold-gold collisions at RHIC (see video below). Credit: Produced using the viscous hydrodynamic code of Paul Romatschke (University of Colorado) and Matt Luzum (Lawrence Berkeley National Laboratory), modified and animated by Jamie Nagle (University of Colorado) and Mike McCumber (Lawrence Berkeley National Laboratory).

“As you look around the collision and measure the particles detected at different angles, it’s not just a random array of particles coming out. There are strong correlations among some of the particles,” Morrison said. For example, if a particle emerges in one direction, you are more likely to see a “correlated” particle emerging in a particular, predictable direction (for example, back-to-back or alongside one another), rather than in random directions.

These correlations produce an asymmetric distribution of particles as they expand from the collision zone, with more particles flowing out in an elliptically shaped area close to the plane of the colliding beams than perpendicular to it. This elliptical flow pattern is one of the defining characteristics of the quark-gluon plasma created in gold-gold collisions at RHIC.

“In the relatively big drop of quark-gluon plasma created in gold-gold collisions, which flows like a friction-free ‘perfect’ liquid, there’s all sorts of collective motion that gives you that pattern. But it was not expected to see this in these smaller systems,” he said.

The strength of these particle correlations in deuteron-gold collisions increases the higher the momentum of the particles, said Brookhaven/PHENIX physicist Anne Sickles, who led the group analyzing and writing up the flow results. That pattern fits the models of “hydrodynamic” flow used to describe the behavior of hot QGP. “Even though the system—the hot spot created in these deuteron-gold collisions—is very small, it shows particle correlations similar to those understood to be triggered by flow in much larger collisions of gold on gold,” Sickles said.

If signs of flow persist to higher levels of correlations—for example, producing flow patterns with three or more lobes instead of simple ellipses—it would be a clear sign that the deuteron is somehow altering the state of the tiny portion of the gold nucleus with which it interacts. Data from the LHC have already revealed some evidence for these higher-level correlations. Future runs colliding deuterons, protons, or helium nuclei with gold at RHIC have the potential to provide the definitive test by changing the shape of the initial hot spot and looking for corresponding changes in particle correlation patterns.

Other intriguing findings emerged when PHENIX physicists looked at the relative numbers of particles containing “charm” and “anticharm” quarks counted in RHIC’s various collisions. Charm and anticharm quarks don’t exist in ordinary matter, so all the charm and anticharm particles picked up by RHIC’s detectors are created in the collisions. But there are several ways these particles and their antiparticles can combine, with the charm and anticharm particles in one arrangement (J/psi particles) being more tightly bound together than in others (e.g. psi prime). Counting the numbers of the different combinations emerging from different types of collisions could offer clues about what’s happening inside.

The glancing collisions produced results very similar to those from proton-proton collisions. “It was as if the deuteron was colliding with a single proton at the edge of the gold nucleus,” said Darren McGlinchey of the University of Colorado, who led the group that wrote the paper on these results.

In the central collisions, however, where the deuteron interacts with more protons and neutrons inside the nucleus, the detectors counted fewer of both types of charm-anticharm particles than would be expected from these multiple interactions. Additionally, the number of the less-tightly bound charm-anticharm pairs (the psi prime particles) was suppressed more than the tightly bound J/psi’s—and this difference got bigger the more central the collisions were.

“This differential particle suppression suggests that something novel is going on in the more central deuteron-gold collisions,” McGlinchey said.

Is it something that happens in the collision—perhaps interactions of the particles with tiny specks of quark-gluon plasma, causing them to lose energy and get “stuck” as happens in the big drops of QGP formed in gold-gold collisions? Or is it due to some characteristic of the bigger nucleus that exists before the collision even takes place?

That question of before or after—which physicists refer to as initial state vs. final state effects—is a big part of the debate going on right now about these findings from both RHIC and the LHC.

Some theorists, for example, suggest that the correlations in particle flow patterns observed in deuteron-gold and proton-lead collisions could be triggered not by tiny specks of hot quark-gluon plasma, but instead by properties of the “cold” nuclei themselves. These nuclei, they say, reveal a different aspect of their identity when moving close to the speed of light.

Their evidence comes from experiments at other colliders revealing that the quarks and gluons making up protons and neutrons are far from static. They constantly move about and even blink in and out of existence, forming new particles and disappearing like fireflies blinking on and off in the evening sky—with the gluons, in particular, proliferating profusely to the point where they dominate the nuclei.

Because light speed motion stretches time, it effectively freezes this action so the fast moving nuclei appear as dense walls of gluons, called color glass condensates, which are thicker in the center of the speeding nuclei than near their edges. These variations in the distribution of gluons within the nuclei might account for some of the unusual signs observed when smaller particles like deuterons or protons collide with the nuclei. The gluon walls may even play a role in the formation of “large” scale quark-gluon plasma in nucleus-nucleus collisions.

Separating the initial state effects from the final state effects is important if scientists want to fully understand the subtle details of the big drops of QGP created at RHIC and the LHC.

Another way to disentangle the roles played by conditions before and after the collisions would be to probe the light-speed nuclei with extreme precision using a beam of accelerated electrons. Brookhaven Lab has a vision for transforming RHIC into a machine with that capability—known as an electron ion collider—by adding an electron accelerator ring to the existing RHIC infrastructure sometime in the 2020s. The new facility would be called eRHIC.

“Using electrons and small nuclei such as protons, deuterons, and helium to probe the larger, heavy nuclei are complementary ways to get a complete picture of what’s going on inside the nucleus,” said Nagle. That glimpse of the inner workings of atomic nuclei will help scientists better understand the quark gluon plasma—and possibly how that primordial soup ultimately gave rise to the bulk of visible matter in today’s world.