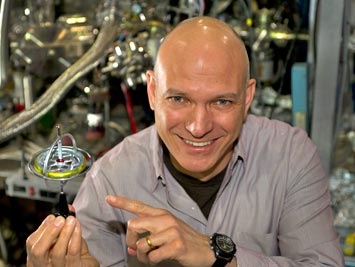 Starting January 23, 2014, Stony Brook University is offering a graduate-level course on synchrotron sources and applications. Darío Arena, a physicist in the Photon Sciences Directorate and also an adjunct professor at Stony Brook, is organizing the 14-week course, which will be held at Brookhaven National Laboratory in the seminar room of Bldg. 725. The biannual course was last offered in 2012.

“We’re very excited to be offering again the course on Applications of Synchrotron Radiation,” said Arena. “Course topics will highlight many of the techniques that will be featured at NSLS-II. Enrolled students and their colleagues will help form the core of the future scientists and engineers who will make optimal use of this new, exceptional facility.”

Construction of the National Synchrotron Light Source (NSLS-II) is now over 90 percent complete, with commissioning of the injector system ongoing and expected to finish by the end of the summer in 2014. NSLS-II will generate x-rays 10,000 times brighter than Brookhaven’s NSLS, which started operating in 1982 as the world’s first light source dedicated to the production of synchrotron radiation. Arena operates NSLS beamline U4B and he is also lead scientist for CSX-2, one of the initial suite of beamlines at NSLS-II. His main research focus is on x-ray spectroscopy of advanced magnetic materials.

Course content is intended for graduate students in physics, chemistry, geosciences, biology, materials science, engineering and related fields, as well as staff at synchrotron radiation facilities. Classes will provide a systematic view of modern light sources, including NSLS-II; the principles of various techniques such as diffraction, spectroscopy, and microscopy; and the science enabled by these techniques.

According to Starr Munson in the Lab’s Human Resources & Occupational Medicine Division, Brookhaven staff taking this graduate course will be reimbursed 100 percent for the cost of tuition, excluding fees and books.

Contact Arena for a class schedule and information on registration.