Planning a Response to a 'Dirty Bomb'

This Los Alamos National Laboratory animation simulates the transport and dispersion of particles of various sizes in an urban setting.

If a terrorist group were to detonate a so-called “dirty bomb” or radiological dispersal device (RDD) in a populated area, the local first responders will take the initial radiation measurements upon which health officials will base decisions on how best to protect the public. While scientific and technical support from federal agencies such as the Department of Energy and its Radiological Assistance Program will be en route to the scene within a few hours of a request by the State, critical decisions for sheltering and evacuation will typically take place before these resources arrive. To be effective in the interim, local first responders need to pre-plan tactics to assess the scope and severity of the radiological aspects of the emergency.

“When there’s a better understanding of where the contamination is and its extent, you can make evacuation decisions for the sheltered population.”

Brookhaven Laboratory’s Steve Musolino, a health physicist in the Nonproliferation and National Security Department, recently co-authored a paper in the journal Health Physics that lays out the precise steps that should be taken and in what order. For the past 10 years, Musolino has collaborated with Fred Harper of the Sandia National Laboratories to apply the results of explosive experiments with materials that might be used in an RDD and modeling of their dispersal to predict how a realistic scenario of spreading radioactive material might unfold and what actions would be useful under those circumstances.

Harper has conducted experiments for the past 25 years at Sandia simulating how radioactive material from an explosive RDD might become airborne. Based on the data generated, he and Musolino co-authored a paper in 2006 giving a set of recommendations for responders, planners and decision-makers who need pragmatic guidance on general aspects of how to plan the response. Now, more than 400 additional experiments later, the pair (along with other collaborators) offer guidance on what specific actions responders should take in the first few hours following the detonation of an RDD.

The additional data have allowed them to revise some of the earlier estimates, specifically shrinking the initial hazard boundary from 500 meters to 250 meters. 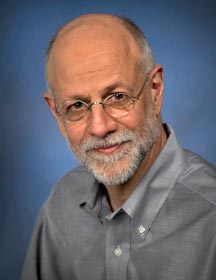 “Fred has done a series of experiments that provide more data on the potential for ballistic fragments of the RDD radioactive materials,” Musolino said. “This significantly reduced the uncertainties in terms of our interpretation of how far you can fling a significant amount of radioactive material. That reduced uncertainty is largely the reason we shrunk the initial hazard boundary within which acute radiation exposure is a possibility.

“We recommend a revised initial hazard boundary at 250 meters to protect responders and the public from acute radiation effects before coherent radiation data are available, when all we know is there was a bang and somebody has detected radiation,” Musolino said.  “There is a larger area going out to 500 meters in all directions and two kilometers downwind where we recommend the public shelter-in-place to avoid low levels of contamination on the ground and to avoid the passing plume. “

This default recommendation on shelter-in-place to avoid exposure was based on modeling studies using Harper’s data by co-author Brooke Buddemeier of Lawrence Livermore National Laboratory (LLNL).

“When there’s a better understanding of where the contamination is and its extent, you can make evacuation decisions for the sheltered population,” Musolino said.

Musolino stressed the importance of taking immediate radiation measurements to assess the potential for health effects. The paper specifies what initial field measurements of the radiation are needed to to begin mapping the radiation “footprint” and for decisions on protecting the public based on the measurements.

“The reality is that if there is a large fraction of the radioactive material going into the air, you’re going to have this messy chaotic splatter of contamination,” he said. “You can’t accurately tell the public how to avoid this radiation hazard until you map it. This is one of the reasons sheltering-in-place is an important protective action.”

Predicting the fate of the radioactive material after a detonation is a complicated business. 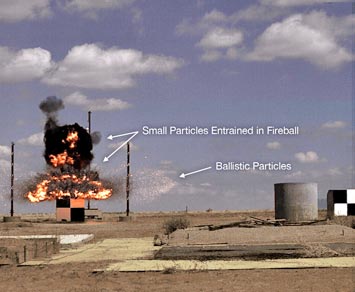 Experiment at the Sandia National Lab showing a test device wherein all or part of the surrogate radioactive material was converted into ballistic fragments approximately 100- to 500-mu in size. If the device had generated small particles, less than 100 microns, this debris would be entrained inside the fireball and subjected to the buoyant rise and dispersal by local meteorological conditions.

“It’s not a given that just because a terrorist puts explosive on radioactive material that it instantly all turns into aerosol particles,” he said. “It could be blasted into large chunks or smaller ballistic fragments that fall very close to where the explosion took place. Until you get coherent radiation measurements, you can’t determine if the contamination is local deposition from ballistic chunks of radioactive material from the RDD, or if the RDD explosion turned the radioactive material into aerosol that went a long distance downwind or some combination of the two. If the RDD did produce an aerosol, the experimental data indicate the aerosol is in the resulting fireball from the explosion and a ‘rule of thumb’ is that five percent of what’s in the fireball is going to deposit on the ground underneath it, and you’re going to get a hot spot from that.”

The new publication gives recommendations on the tactics for gathering the initial measurements so that the first responders can identify whether the radioactive material was only deposited close to the point of detonation or if there is likely to be widespread contamination. To begin to measure the actual shape of the contamination “footprint,” the team advises that the first measurements be in a straight line that cuts across the downwind Shelter-in-Place Zone at approximately one kilometer from the point of detonation. The results of this survey will provide a preliminary indication of the extent of contamination and guide where to perform a similar second survey, closer or further away. Then the decision makers will have early coherent information on where the actual control zones should be set and where to locate uncontaminated evacuation routes.

“As more field data become available, the first responders can generate a more accurate map that can be coupled with and compared to computer modeling and aerial-based measurements,“ Musolino said.  “All these data get pulled together so that decision-makers can make recommendations for public safety and for responder protection as well.”

The paper also gives guidance for providing data to scientists charged with identifying characteristics of the device. Co-author Michael Brown of Los Alamos National Laboratory conducted three-dimensional modeling of explosive dispersals in a high-rise urban area. Brown’s modeling and animations show how particles of different sizes would move through the area with various urban wind patterns. He applied different weather conditions and different aerosol fractions and other variations. Based on the results Musolino and co-author Richard Schlueck defined a 41-point survey that a forensic analyst could use to determine how much radioactive material was in the device.

All the recommendations in the paper are pragmatic, with a “reality check” by co-author Schlueck, a hazmat battalion chief in the New York City Fire Department.

“It should be useful to any city in the nation that wants to plan for this sort of event at a tactical and operational level,” Musolino said.