A photographer by skill but an astronomer at heart, Rick Jackimowicz's cosmic photos capture his two loves in one frame. Jackimowicz, an NSLS protein crystallography operator and former technical project supervisor for RHIC, began photographing the night sky when he was just 17 with the assistance of a telescope he built himself. 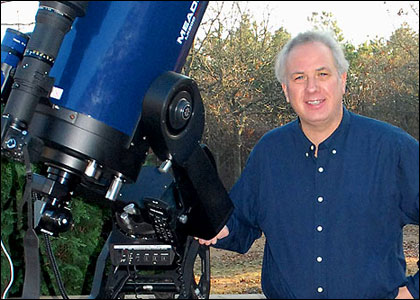 Rick Jackimowicz with some of his gear

"It was the only way I could afford to get equipment," said Jackimowicz, whose collection of astrophotography gear has greatly grown during the span of his almost 40-year-old pastime.

Armed with a telescope, a laptop, and several types of specialty digital cameras, including an autoguider to compensate for movement of deep space objects, Jackimowicz takes photos of everything from star clusters, nebulas and galaxies, to the planets and comets in our own solar system.

"With help from modern photographic equipment and computers, you can capture what your eyes can't see," he said. "Many times, I shoot a blank portion of sky and hope what I'm looking for shows up."

The conditions have to be perfect, though - no moonlight or clouds to ruin the view. And when everything is right, Jackimowicz sets up camp in his favorite location: his backyard.

"Astrophotography is one of the few peaceful hobbies where you don't have to leave home," he said. "It's simply beautiful." 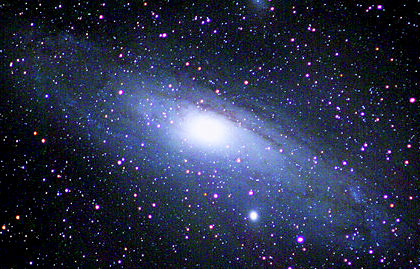 The Andromeda galaxy as photographed by Jackimowicz

Jackimowicz, who studied astrophysics in college, ran a photography side business for many years, taking photos at numerous BNLers' weddings. After joining Brookhaven in 1980, he became an avid member and president of the BERA Astronomy Club, and built a 16-inch telescope for the Lab's now-defunct observatory. His images have been published in multiple instructional books, and his favorite work is of colorful, wispy nebulas.

At the moment, Jackimowicz is trying to capture photos of Comet 17P/Holmes, a periodic comet in our solar system that's making a rare and very visible appearance in the northeastern sky through the beginning of January. He encourages anyone who's interested in viewing the comet, or other parts of the night sky, to contact him.

"I take pleasure in sharing these images with people." Jackimowicz said. "Deep space just has its own beauty."

To take a look at some of Jackimowicz's work, see http://www.pbase.com/rick_jack/astronomy.