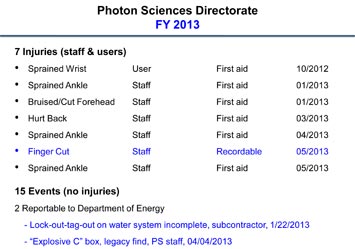 How did we do last year? Andrew Ackerman, deputy manager for Environment, Safety and Health (ESH) in the Photon Sciences Directorate, summarized ESH activities and performance in fiscal year 2013.

“The Light Source is going away, which is sad for many of us. But Light Source II is coming up, which is exciting for all of us,” said Ackerman. That transition from the National Synchrotron Light Source to NSLS-II, according to Ackerman, was the main driver for much of what was done last year under the ESH banner. “Our primary goal was supporting the expansion of accelerator efforts for NSLS-II,” he said. 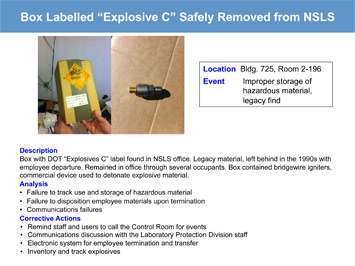 Ackerman noted in particular big changes to requirements for conduct of operations, defined as the execution of operational and management tasks in a deliberate and structured manner to optimize excellence in performance and minimize variations in performance. He also acknowledged all the work done for the NSLS-II booster instrumentation readiness review in September 2013, followed weeks later by the successful accelerator readiness review for the booster, enabling Photon Sciences to begin booster commissioning at the end of November. 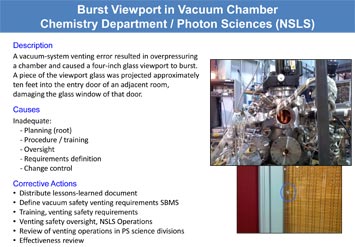 For NSLS, what lies ahead is decommissioning. “We have a lot of lead, most of which is not painted, so moving it will require cleaning and sampling,” said Ackerman. He listed power distribution equipment and reagents as other items of concern.

For traffic safety, as Ackerman pointed out, “The trend is going in the wrong direction.” He said several ideas are being considered, including discussions with targeted groups. Ackerman also described the new Lab policy, which requires supervisor meetings and disciplinary action. 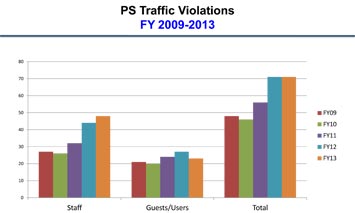 Ackerman had this to say about the discovery of a box labeled “Explosive C” (see second slide):

“That event resulted in much attention and careful response. In the end, we learned that there was no significant risk to personnel, but this occurrence is a good reminder of the need to be mindful of what we might find as we clear out spaces and move to new locations. No doubt many of us will be relocating in the coming months as we fill out the new lab-office buildings and other spaces within NSLS II. Please remember that some of the areas we are leaving have not been cleared for some time and may contain reagents, equipment, and other potentially hazardous items. Be careful.”

Ackerman also asked that both staff and users on site call the Lab’s Emergency Services at Ext. 2222 and the Control Room at Ext. 2550 if something unexpected arises.