Weather Radar for Predicting Storm Impacts: National Weather Service radar observations (left) of precipitation intensity can be used in conjunction with other geographical information (middle) like utility infrastructure locations and vegetation density in order to better forecast the locations of weather impacts on the utility system (right).

Since last summer, Brookhaven Lab has offered a series of workshops on topics of interest for the “Smarter Electric Grid” community.  The most recent, held over two days in December, brought together some 35 participants representing several New York State utilities, two universities, and three Department of Energy Labs to explore how to identify and predict weather impacts on utility systems, specifically the electric grid.

The goal was to explore how utilities can use publically available weather information to enhance their preparation for restoration activities more quickly and with more information when customers have lost power as a result of severe weather, like intense thunderstorms, hurricanes, and snowstorms. Key participants in the meeting included Los Alamos and Argonne national laboratories, Stony Brook University, the University of Connecticut, the Long Island Power Authority (now Public Service Electric and Gas-Long Island), Orange and Rockland Utilities (ORU), and Central Hudson Gas and Electric.  ORU presented on how weather information is currently used by utilities and future R&D efforts planned to enhance response by incorporating more available data. The group also toured the National Weather Service office for the tri-state region, which is located on the Brookhaven Lab site.

"I don’t think there has ever been a workshop quite like this one among utility experts and meteorologists - they don’t necessarily talk the same language," said Stephanie Hamilton, Brookhaven’s Smarter Grid manager.  “Part of the purpose of this workshop was to foster understanding.  Utility folks are not meteorologists, and even if they have the information, they need some awareness of what it means and how it can be used.”

Computer software developed by Electrical Distribution Design, Inc. (EDD), currently in use by ORU in upstate New York, may provide a first step in the effort to recognize and predict storms that may impact the electric grid, so utilities can be better prepared to respond.

On the first workshop day, participants discussed what weather data is currently available but not in use that might be integrated into utility operations. ORU’s Charlie Scirbona stressed that the most expensive thing that an electric utility can do is post-storm restoration.  The work is very labor intensive and utilities often have to call in crews from other areas of the country to assist.  Scirbona estimated that it cost ORU $275,000 an hour for restoration efforts after Hurricane Sandy.

Although ORU currently measures wind direction and temperature at ground level in the course of its operations, meteorologists Michael Jensen and Scott Giangrande from Brookhaven’s Atmospheric Sciences Division detailed how real-time radar observations might add information like precipitation intensity and wind velocity to the forecasting tools used by utilities.  Jensen also presented an overview of how weather radar systems work and the relevant information that is provided on storm characteristics. 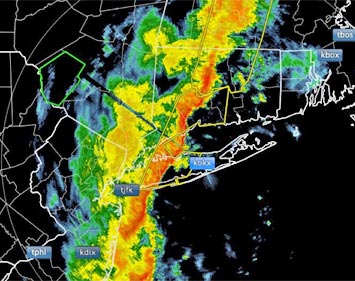 Radar observations of squall line event impacting the Long Island region during the summer of 2012.

“Weather radar systems operated by the National Weather Service, including one on the Brookhaven Lab site, offer a wealth of data on the characteristics of storms that can provide crucial information for utility systems that are looking to forecast which service areas and infrastructure are most vulnerable during severe weather events,” Jensen said.

Stony Brook University’s Brian Colle spoke about how radar observations are used to determine the spatial distribution and trend in storms in the Northeast. Kelly Lombardo from the University of Connecticut presented her work on identifying and classifying organized storm systems using radar observations. Giangrande wrapped up the series of weather radar presentations by describing how these observations might be used in an operational framework to aid in the near real-time identification of storm impacts and help guide utility restoration efforts.

Although small utilities like ORU and Central Hudson Gas and Electric don’t have the resources to hire a full-time meteorologist, one suggestion that emerged from the conference was for several utilities in a specific area to contract with a commercial weather provider who could interpret complex data sets and come up with an informed prediction.

On the second day of the conference, Bob Lofaro from Brookhaven’s Sustainable Energy Technologies Department spoke about the potential role of the Lab’s Northeast Sustainable Energy Research Center (NSERC), currently under construction.  NSERC will be able to function as a grid laboratory where new technologies, including those related to weatherization, can be tested in real time to assess how they will perform on the wider electric grid.

Michael Villaran, principal engineer for the Lab’s Renewable Energy Group, said the Laboratory grid is currently being modeled using EDD’s distribution workstation software, which will be used to locate any inefficiencies in the distribution system as it now exists. The group plans to experiment with how to use dynamic microgrids to facilitate the restoration process after a storm has hit a system.

“The NSERC center is designed specifically for research and configured to experiment on different parts of the photovoltaic array,” Villaran said.

Since the NSERC is located on site, it can be operated as a micro-grid with matching generation and load. Although it will be connected to the rest of the Lab grid most of the time, it can potentially be separated out and operate by itself.

Meng Yue of the Lab’s Sustainable Energy Technologies Department talked about weather impact applications of Probabilistic Risk Assessment (PRA), the focus of an earlier Smarter Grid workshop, which ironically was conducted by teleconference after being cancelled twice due to weather.

“PRA is a rather conceptual approach,” Yue said.  “The approach itself is probabilistic because we have to cope with unknowns and uncertainties.  If we can assess the randomness, for example by looking at a large number of representative scenarios, these uncertainties will be better captured and presented. Modeling how all the factors relate will give us better odds of predicting how these conditions can affect the grid, how it’s going to fail, where it’s going to fail, and how the utilities can bring it back up.”

Another suggestion of a path forward at the conclusion of the workshop was the formation of a consortium of utilities and research institutions to tie weather forecasting to other Smarter Grid initiatives.

“This group could determine what kind of weather-related research the utilities need that our environmental scientists could provide,” Hamilton said. “They could also identify the utilities’ critical customers — like pharmacies, gas stations and schools — that you need to have up and going quickly after a big storm,.”

Villaran added that they would also need to explore synergies between various utilities in an area.

“Electric utilities share their poles with the telephone system, cable TV and other types of utilities,” he said.  “So if your utility is using a commercial communication company and that company depends on hard wire or fiber on utility poles, they could be knocked out as well. There’s a lot of interface between those different services.”

The next workshop in the series will take place in April and will focus on what the group calls the three Rs – reliability, resiliency, and restoration. In particular, they would like to develop some metrics for resiliency, which currently don’t exist in the industry.

The first in the three Rs will focus on “The Resilient Customer.”  The Lab’s Rich Ohlsen, who works with public agencies like FEMA that respond to emergencies, leads the workshop planning.

“Resiliency is more than building stronger and better utilities, it is about making the whole system and the process resilient, said Ohlsen.  “Linking up communities to work with the utilities as a unified entity is one of our goals of the workshop.”