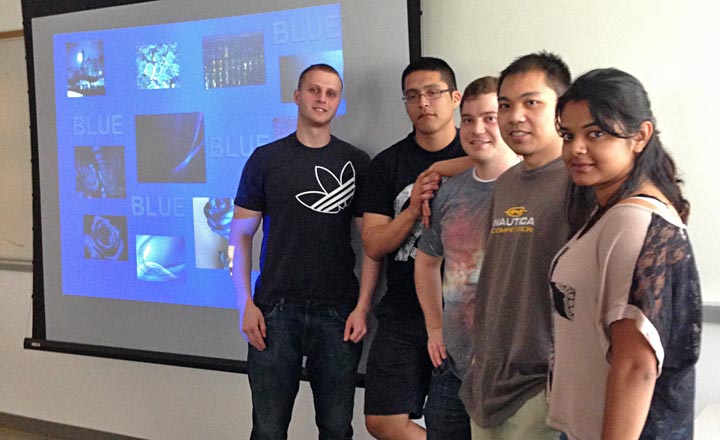 Over the past two semesters, Brookhaven Lab’s Lev Neymotin has been working with math and computer science students at Farmingdale State College (FSC) to acquaint them with research project techniques and analysis. The projects he devised – two last semester and another two currently underway – are also intended to allow students to apply their own creativity to interesting real world questions in the science, technology, engineering and math (STEM) fields.

Neymotin, a scientist in the Lab’s Nonproliferation and National Security Department, worked with the chair of FSC’s mathematics department to establish the Interdisciplinary Signal Analysis Laboratory (iSAL), where students explore the benefits of sharing different approaches to data analysis.

“In a broad sense, a signal is a carrier of any information presented in a form appropriate for quantitative, pattern, and logical analysis,” Neymotin said. “It could be a time series of measureable characteristics of any process or event in the area of physics, technology, biology and life, and society; a figure; a succession of different frames of a video clip; or a collection of physical objects or images creating patterns. So basically everything is a signal. ‘Information’ is a little vague to me, ‘signal’ is more descriptive.”

Neymotin originally conceived of the iSAL idea as an interdepartmental collaboration for Brookhaven Lab, but his wife’s job teaching math at FSC led to discussions with officials at the college to inaugurate an iSAL-based program with a focus on education. Neymotin was invited to participate as a visiting scientist, and, working from his home office, he proposed several dozen potential projects.

“Any scientific project eventually reduces to analyzing data,” he said. Along with FSC faculty advisors, Neymotin spends evenings at the college pulling in information and outlining the philosophy of the projects to teams of three to five students, who are expected to apply their knowledge and creativity to bear on the scientific challenge.

This semester, 12 students are enrolled in the program, a substantial increase over the previous session, which Neymotin attributes in large measure to word-of-mouth.

“Students want to do something different that takes them outside of the textbook,” he said.

This semester’s projects are an analysis of the “Music Genome” — developing an approach for constructing “mathematical” profiles of musical styles using various digital signal processing methods — and another on  “Language of Animals, Birds, Fish, and Insects” – analysis of recordings of “speech” of different animal species.  In the music genome project, Neymotin presented five performances of the same piano piece by Chopin and told the students to use the tools learned in class to identify the differences between styles of performance.

“One can count a dozen or so key characteristics of music, including timbre, pitch, tempo, reverberation, among others,” Neymotin said. “I told them to focus on a little phrase from the music piece and apply some of those aspects. First of all, you have to quantify them, assign them a number. Of course it will not be pure science, but by creating ‘grades’ for each aspect, you can compare the styles.  It’s interesting and the students were excited about the project.”

If time permits, Neymotin would also like the students to investigate whether Ludwig von Beethoven’s style changed as he gradually lost his hearing.

“Beethoven was losing his hearing over a number of years and the question is whether this gradual loss translated into change of his music style,” he said. “ I pulled out a collection of 32 sonatas written over a period of 27 years from 1795 to 1822 and arranged them in time to see whether analysis would show some identifiable change in style.”

For the animal language project, students are creating a database/dictionary of examples of the “speech” of different animals based on types of sounds.

“Again, there’s a lot available on the internet,” Neymotin said. “There’s a long list of expressions that animals have to express anger, hostility, love, hunger, or call for action. Students try to find different words and create their sound profiles, also using numbers. They have to develop the metrics — metrics is the most important thing here.” 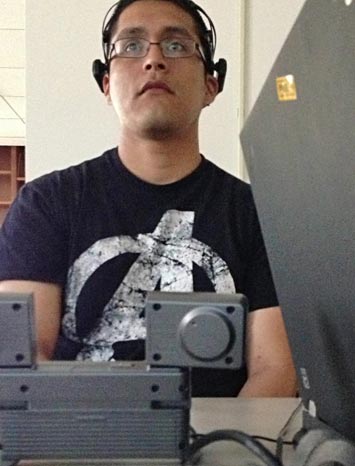 The team monitored the brain activity of a subject looking at various representations of color.

In another part of the project, students were given a recording of an alligator growling recorded in a swamp, where there were also birds singing.

“So you have two signals which overlap and one of their jobs is to separate the signals so you hear only the alligator and filter out the birds,” Neymotin said. “It’s a fairly routine job for the people who work in this business but for the students it’s not that transparent.”

Last semester, students enrolled in the program participated in two projects: one examined how the brain responds to color, and the other studied heart rate fluctuations following strenuous exercise. In the first, students recorded the signals transmitted to a portable electroencephalography device to see how a subject’s brain responded to different colors. They also developed an interface of different inputs by sometimes also displaying the word for the color in writing and having the word for the color spoken.

The heartbeat project analyzed the sounds produced by the human heart during the relaxation period immediately following a strenuous exercise. The sound signal was captured by a digital stethoscope and stored for further processing on a PC.  Students analyzed not just how the heart rate changed, but also the shapes of the heartbeats. 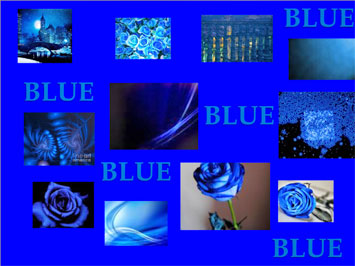 One of the slides that test subjects viewed while being monitored by EEG.

Nolan Vegh from Levittown, who graduated last year from FSC with a degree in applied mathematics, was one of the students who worked on the EEG study. He described how he would observe videos of a subject being monitored while looking at screens showing various colors in various ways.

“I recorded when they would blink or move or do anything else that might disrupt the brain activity and cause an ‘artifact’,” he said. “Although our results were inconclusive, it was great to work with a small group of other people to get something accomplished.”

Vegh is currently working as an accounts coordinator for Gadge USA but plans to return to school for an MBA, concentrating on statistics.

“I believe what I learned in iSAL will really be beneficial in my career, especially with analysis, where you really have to narrow things down. It helps you learn what’s really important and what’s not.”

“For the next semester we are considering offering the students another project from the ‘iSAL Portfolio’– a sonification project,” Neymotin said. “Humans are extremely good at sensing the finest nuances or changes in sound expression and its minute variations in time.  This brings us to sonification - conversion of ‘non-sound’ data streams, images, or patterns into audible signals. That done, you would be able to listen to data streams generated in physics, biology, engineering or medical experiments and processes or ‘listen to patterns,’ either changing in time or static. Some research is already going on out there; much remains to be done.”

How to use the “sonified” data? Neymotin suggests designing it as a research tool or data processing application.

“It may play out as in the saying, ‘build a better mousetrap, and the world will beat a path to your door,’” Neymotin said. The projects currently underway don’t figure to break new scientific ground, but may be training members of the future high tech workforce.

“We know that we will not be opening a new page in science as there have been a lot of experiments done in those areas, but any experiment will give you a window into the research world,” Neymotin said. “ The goal is to show the students how you pick a project, how you design the experiment, how you execute it and how you process the information. So it doesn’t matter if they do not produce something totally shocking to the world, a breakthrough. They will get a sense of how it is done and when they go to a high-tech company they will be comfortable designing their own experiments.”

The school holds periodic colloquiums where students present their project results. They are also encouraged to write papers on their projects to present at student conferences in New York State.

Although he is not paid for this work, Neymotin has found participating in a STEM education project highly rewarding.

“It’s very interesting to interface with the kids,” he said. “What is disturbing to me is that sometimes they are under-challenged and underappreciated — this is a killer. If you can just stimulate their curiosity and excitement, they will learn on their own, and who knows where they could end up?”