'Thanks' to the Lab's Snow-removal Crew 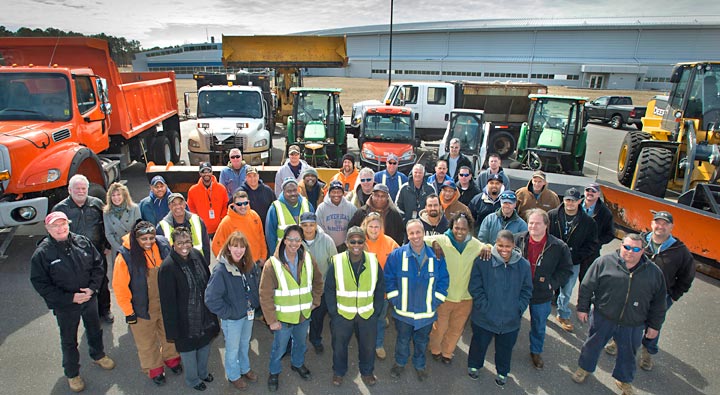 The Facilities & Operations Directorate's snow-removal crew in front of the National Synchrotron Light Source II, one of many facilities at Brookhaven Lab where they cleared more than 54 inches of snow between December 2013 and March 2014

Winter ended and spring began at 12:57 p.m. yesterday, March 20. Still, some mounds of snow remain—dingy, melting reminders of what a winter it was, and the snow-removal crew's massive efforts to clear roads, parking lots, and entryways across the Brookhaven Lab site.

Fifty-four inches of snow fell on site this winter, according to meteorology data collected by the Environmental Sciences Department. On 20 separate occasions between December 2013 and March 2014, as many as 54 team members — including custodians; riggers; heavy-equipment mechanic operators; masons; roads, grounds, and sanitation workers; and supervisors from the Lab's Facilities & Operations Directorate (F&O) with additional support from the local company Ralph Lettieri Excavating, Inc.—worked as safely and quickly as possible to help maintain ongoing operations for scientists and support staff across the site.

"I thank every member of this year's snow removal team who committed to working safely and working hard to ensure that regular operations continued at the Laboratory," said Assistant Laboratory Director for Facilities & Operations (F&O) Lanny Bates. "Whether storms occurred throughout the night or all day long, these dedicated individuals worked long shifts in freezing temperatures with snow, sleet, and rain—storm after storm—and they did an extraordinary job."

What a winter it was. Lab photographers Joe Rubino and Roger Stoutenburgh caught the snowflakes as they fell in these photos taken on site.

Bates added, "Managing these events truly is a team effort. I also thank members of the Laboratory Protection Division, who remained on site and on call to respond to emergencies during the storms, and everyone else who helped minimize impacts to the Laboratory."

F&O's Site Resources Division Manager Tom Lambertson said, "It takes a well-coordinated, highly efficient team to clean this site. With all the snow and sleet this past winter, it was clear that we have an excellent team."