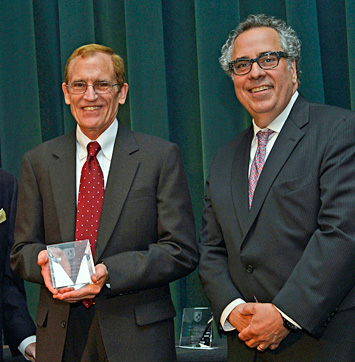 The U.S. Department of Energy’s Brookhaven National Laboratory was among five New York institutions recently recognized by the New York City College of Technology (City Tech) as the “Best of New York.”  The Lab was honored May 14 at the 2014 Best of New York Award dinner at the Hilton Midtown in Manhattan.

Other honorees included the Brooklyn Navy Yard Development Corporation, the International Alliance of Theatrical Stage Employees Local 1, the National Science Foundation, and Société Culinaire Philanthropique, all of which have partnered with City Tech to develop graduates who are ready for the high-tech careers that increasingly define the global economy.

“It's a true privilege to accept this award,” Tribble said. “What they did was marvelous, collecting some 8,000 air samples that will provide very important information about airflow patterns in the city. It’s all to make this a safer place for all New Yorkers.”

Established in 1982, the Best of New York Award Dinner is hosted by the City Tech Foundation, a not-for-profit corporation chartered in 1981 to raise funds for the College. Proceeds from the annual dinner help fund foundation-sponsored scholarships and other student financial assistance and professional development programs.

More information about the S-SAFE study.