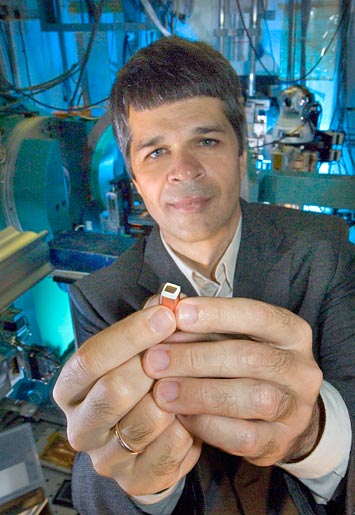 Physicist Aleksey Bolotnikov of Brookhaven Lab's Radiation Detector and Nonproliferation R&D Group will be the recipient of this year’s Room Temperature Semiconductor Detector (RTSD) Scientist Award. Bolotnikov was selected from a group of finalists by the scientific advisory committee of the RTSD conference of the Institute of Electrical and Electronic Engineers (IEEE), and will receive the award at the group’s annual meeting to be held in Seattle in November.

The award is given to the individual who is deemed to have done the most to impact RTSD technology, and the recipient can be recognized for a lifetime of work or for a single achievement.

Ralph James, leader of the Radiation Detector and Nonproliferation R&D Group, said Bolotnikov will be honored for a career rich in achievements. With James’ encouragement, Bolotnikov came to Brookhaven Lab in 2003, after having collaborated on several Lab projects since 1992.

“The output of his work has impacted practically everybody in the field,” James said.  “Aleksey has been a great innovator. He has not only advanced critical knowledge in the area of defects limiting device response, he is someone who has been able to see the world differently, which I think is the key to innovation. He’s been able to see and identify not only the problems but what we need to do to fix them. “

“Aleksey has been a great innovator…. he is someone who has been able to see the world differently.”

Bolotnikov works principally, but not exclusively, with cadmium-zinc-telluride (CZT) detectors, and according to James played a crucial role in shaping the direction of that research. He was the first scientist to recognize the importance of defects or secondary phases that exist inside many of the semiconductor crystals used for making detectors. In conjunction with other team members, Bolotnikov used the National Synchrotron Light Source (NSLS), a U.S. Department of Energy user facility, to probe these materials and their defects. He coupled that experimental knowledge with modeling, studying the role of these secondary phases and how they were modifying and limiting the performance of the detectors.

“His models and the experiments have been validated, not just here but in several other organizations, and many now use his criteria in selecting materials,” James said, “Scientists knew about these secondary defects for a long time, but assumed that they were benign. They couldn’t probe on the length scale that was really needed to understand it, and Aleksey played the key role in seeing how to use our facilities here at the NSLS to provide the critical data to convince the community.”

After identifying the defects, researchers discovered that they reduced the yields for the materials, which increased the cost.  Bolotnikov found a new type of detector design that allowed many of the negative consequences to be mitigated.

“He showed the community how to get high performance from the detectors without requiring the extremely high-quality materials that were produced in very limited quantities,” James said.  “By lowering costs, he was able to increase the use for the devices and facilitate commercialization because now companies could do it in a more profitable way. He began to open the door to some new applications affecting not just the nonproliferation community but also the nuclear medical imaging community, who needed to have large-area imaging devices and needed to also be cost-conscious.  There’s a team of people involved but Aleksey is the brains behind the original idea.”

Not only did Bolotnikov play a role in improving and commercializing the detectors, he built prototype imaging instruments and instruments for spectroscopy to use them, demonstrating extraordinary engineering skills. These instruments have been funded and are showing impressive performance in efficiency and energy resolution.

“Aleksey has had the knowledge to be able to put it all together and to actually build something that you can hold in your hand,” James said.  “And after all, that’s what we really want and what the sponsors really want.  He not only showed how to do things better, but he was able to deliver something that can be used, and that will be remembered for a long time.”

Bolotnikov graduated from Moscow Engineering and Physics Institute in 1983 and received his Ph.D. there in 1991. He moved to the U.S. in 1991. Before joining Brookhaven in 2003, he worked at Columbia University, NASA Marshall Space Flight Center and Caltech. He has published over 100 scientific and technical papers, more than 50 of which are related to the CZT and other room-temperature semiconductor detectors. He is a co-author of a book “Noble Gas Detectors” by E. Aprile, A.E. Bolotnikov, A.I. Bolozdynya, T. Doke.  For his work in the development of CZT detectors, he received three of R&D Magazine's R&D 100 Awards — in 2006, 2009 and 2014 — which honor the top 100 inventions of the year. He has been named the 2006 recipient of the Charles Hirsch Award, given annually to a member of the Long Island Section of IEEE. This year, he became a fellow of SPIE, the international society for optics and photonics.