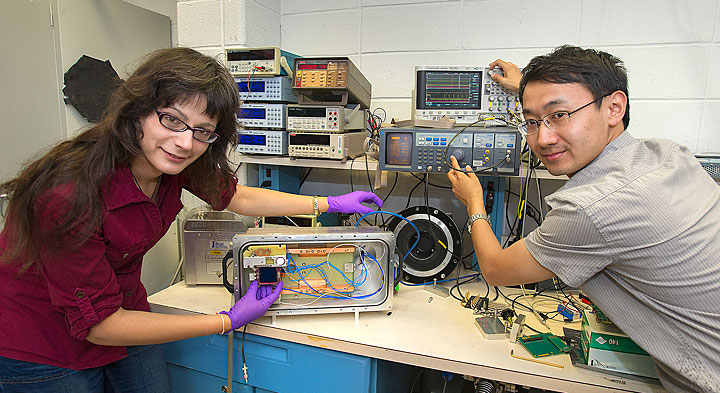 Design Engineer Justine Haupt (left) and Postdoctoral Research Associate Dajun Huang (right) prepare a test chamber that scientists in the Instrumentation Division are are using to evaluate the digital sensors they are designing for the Large Synoptic Survey Telescope, which is scheduled to see "first light" in 2020, and start surveying in 2022.

A single sensor for the world’s largest digital camera detected light making its way through wind, air turbulence, and Earth’s atmosphere, successfully converting the light into a glimpse of the galactic wonders that this delicate instrument will eventually capture as it scans the night sky. When installed in the camera of the Large Synoptic Survey Telescope (LSST), these sensors will convert light captured from distant galaxies into digital information that will provide unprecedented insight into our understanding of the universe.

But the sensor wasn’t on the telescope yet; it was in a clean room at the U.S. Department of Energy’s (DOE) Brookhaven National Laboratory. And the “atmosphere” was being projected from a custom piece of glass made to replicate what the sensor will actually see once it is part of the camera inside the LSST, which every three days will survey the entire night sky visible from its location atop a mountain in Chile. The meticulous laboratory test at Brookhaven was one of many that scientists in the Lab’s Instrumentation Division are conducting on the 201 sensors they are designing for the digital “film” of the telescope’s camera.

Scheduled to see “first light” in 2020, and start surveying in 2022, the LSST will ultimately survey 20 billion galaxies and 17 billion stars in a 10-year period. . In working on sensors for the camera, Brookhaven is partnering with dozens of public and private organizations, including universities, national laboratories, and Google, Inc., to make the LSST a reality. The project is jointly sponsored by the National Science Foundation (NSF) and DOE’s Office of Science.  NSF leads the overall LSST effort, while DOE is responsible for providing the camera, with the DOE-supported effort led by the SLAC National Accelerator Laboratory.

I think it will be an important chapter in the history of physics.

The data gathered from those distant galaxies will offer scientists insight into the seemingly unreal: the dark matter and dark energy that in fact comprise more than 95 percent of our universe (the planets, stars, and other visible matter making up a mere 5 percent). Dark energy, the mysterious force that is accelerating the universe’s expansion, only manifests itself by its effects on large-scale cosmic structures. Dark matter, invisible on its own, can be measured by observing how light bends around it. Understanding these strange concepts and their role in cosmic acceleration are among the “science drivers” recently identified by a panel reviewing priorities in particle physics, which recommended that DOE’s work on the LSST camera go forward no matter what funding scenario the field may face.

“This question of dark energy and dark matter is so compelling,” said Senior Scientist Paul O’Connor, who’s leading the LSST camera team at Brookhaven. “There’s incontrovertible evidence that these are the major constituents of the universe; they don’t fit into the rest of physics.”

LSST’s incredible precision and sensitivity will give scientists access to both.

To unlock the mysteries of dark energy, LSST needs to be able to measure redshift, a phenomenon observed when the wavelengths of light emitted by galaxies receding at the distant edges of space appear to stretch out, or shift to the red end of the light spectrum. Most galaxies to be detected by LSST are faint and far away, at the limits of current sensor technology for measuring redshifts.  So O’Connor said his team needed to design the LSST camera sensors with a much thicker layer of silicon and entirely new electronics.

“Making a contribution on the experimental end exploring these phenomena is quite satisfying,” O’Connor said. “I think it will be an important chapter in the history of physics.”

But the LSST won’t just be for scientists. The general public will be able to access its images through planned projects such as adopting a patch of sky to monitor and track changes, and interacting with a time-lapse movie shown in science centers depicting a decade of observation. The telescope’s imaging powers will also join the host of other instruments used to detect exploding supernovae, and asteroids that could hit our planet, giving scientists more warning before they come close to Earth. 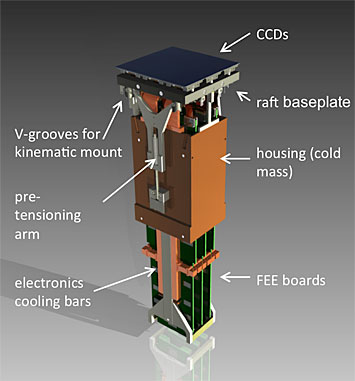 A design of a single raft tower housing the charge-coupled devices (CCDs) — sensors that convert light captured by the telescope into an electrical charge representing a specific detail that a computer can turn into a digital picture. The full camera will have 21 raft towers.

The LSST sensors that the Brookhaven scientists are designing, building, and testing are known as charge-coupled devices (CCDs). Each pixel on a CCD converts light captured by the telescope into an electrical charge representing a specific detail that a computer can turn into a digital picture. LSST’s CCDs will capture deep space in unprecedented detail with 3.2-gigapixel sensors — that’s nearly 200 times larger than a high-end consumer camera.

Each CCD operates individually, but they will all work together to render a complete image. Nine CCDs sit in a “raft,” or support structure, with their electronics packed underneath. The modularity that the LSST gains because of these rafts will allow for the incredibly quick sky surveys — reading 3 billion pixels in 2 seconds. It will also enable easier telescope maintenance since scientists can fix a single CCD instead of fixing the whole system, which will come in handy when the rafts are housed in a vacuum chamber kept at -100 degrees Celsius inside the telescope.

The modularity of the rafts will also be a benefit during the installation and testing of the telescope base. Typically, when scientists build a telescope, they use a placeholder camera to test whether the mount and optics are working properly. Later, they install the full camera and sensors, after those instruments have undergone their own functional tests. But O’Connor said the LSST team will be able to use a single raft for initial testing on the mountain, allowing the scientists to measure the success of these components on the telescope itself.

“We’re now finding some of the instrument effects emerging as we put the CCDs together at the laboratory phase, so we can prepare the type of software we need now,” O’Connor said. “But the sky tells you things you can’t easily measure in the lab.”

To capture the clearest and most extensive picture of the cosmos, the CCDs must lie perfectly flat and have no more than a 250 micron (millionth of a meter) space between them. This requires painstaking assembly at Brookhaven, but at some point the sensors have to get to California to join the other parts, and then to Chile for operation. Mechanical engineers at Brookhaven are designing a stabilized shipping container to transport the sensitive CCDs across the country and continents.

By the end of 2014, O’Connor said, his team hopes to have the first fully functional raft completed and tested. After that, he said, it will take four years to build and test the rest of the CCD rafts, which is on track to meet the “first light” deadline.

“We have a well-defined job now. We can do our part while the other teams building the rest of the LSST do theirs,” O’Connor said. “This is a big project. This is the way science is going to solve big problems.”

For more information, go to www.lsst.org.