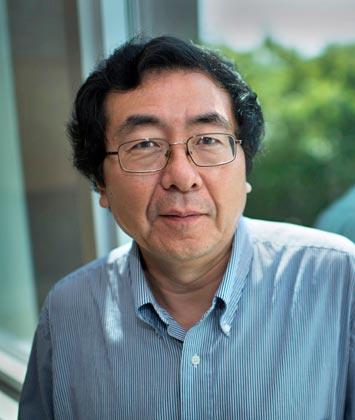 Jingguang Chen, a senior scientist in the Lab’s Chemistry Department who holds a joint appointment as the Thayer Lindsley Professor of Chemical Engineering at Columbia University, has won the American Chemical Society’s (ACS) 2015 George A. Olah Award in Hydrocarbon or Petroleum Chemistry.

Established by ACS in 1948 to honor Olah — a Hungarian American chemist who won the 1994 Nobel Prize in Chemistry — the award is intended to recognize, encourage, and stimulate outstanding research achievements in hydrocarbon or petroleum chemistry. Chen is being honored for research that focuses on understanding and developing metal carbides and bimetallic alloys as catalysts and electrocatalysts.

Chen’s research has had a positive impact on both industrial and academic catalysis science. He started his career as a staff scientist at Exxon (now ExxonMobil) and then moved to the University of Delaware, where he was the director of the Center for Catalytic Science and Technology for seven years. He has been an active user at Brookhaven’s science facilities for many years. He is currently the lead investigator of the successful Synchrotron Catalysis Consortium, which has developed synchrotron methods for catalysis science at Brookhaven’s National Synchrotron Light Source (NSLS) and NSLS-II. He has published over 300 scientific papers, holds 20 United States patents, served on several editorial boards, and is currently a director-at-large for the North American Catalysis Society and the chair of the Catalysis Division of the ACS. Chen is also the recipient of additional awards, including the Herman Pines Award in Catalysis (2011), and the Excellence in Catalysis Award from the New York Catalysis Society (2008).

“It is gratifying to be recognized by the ACS for my work,” said Chen.  “I am humbled to add my name to the distinguished list of extraordinary scientists whose work in the field of chemistry and catalysis has made a difference in our world. I look forward to continuing my collaboration at Brookhaven.”

Chen will officially receive the Olah award at the next ACS national meeting, scheduled for March 2015.