A process invented by DOE's Thomas Jefferson National Accelerator Facility (Jefferson Lab) engineers has been saving BNL approximately $50,000 per week in electric costs for running the Relativistic Heavy Ion Collider (RHIC). All told, because of using this technology, called the "Ganni Cycle," as part of a three-phase upgrade to the RHIC cryogenic system, the electricity needed to operate the system has dropped from 9.2 megawatts (MW) in 2002 to 5 MW currently, saving the Laboratory as much as $1.5 million per year during a typical 30-week annual operating schedule for RHIC. 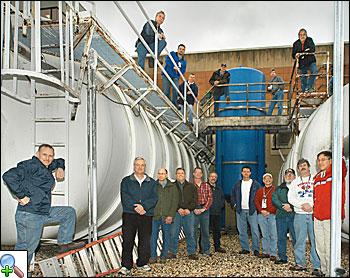 "The Jefferson Lab technology saves energy and was inexpensive to implement," said Roberto Than, head of cryogenics for the Collider-Accelerator Department. "We programmed the computer system with new control logic and installed some new piping and valves. Because the plant is currently operating so efficiently, it uses fewer compressors. Now we have more spare compressors to use as backups. This means we can maintain cooling and ensure the system's high availability. This also reduces maintenance costs, so we are saving on every level."

RHIC's cryogenic plant - the largest in the world - cools the collider's 1,740 superconducting magnets to minus 456 degrees Fahrenheit, the temperature at which there is no resistance to electricity. The cooling cycle begins by compressing room-temperature helium to high pressure. This high-pressure helium is then expanded through turbines to make it progressively colder until the liquid helium temperature of minus 456 degrees Fahrenheit is reached. This liquid helium is then supplied to the collider ring where it boils off to cool the superconducting magnets. The vapor created is returned to the plant to begin the cycle again.

The final phase of the cryogenic upgrade was completed in 2006, three years after the Ganni Cycle was first implemented. With the help of funding from the DOE Energy Management Program and in consultation with Venkatarao Ganni, the primary inventor of the Ganni Cycle, piping and valves in the cryogenic plant were reconfigured. Also, the method used to send helium flow through the RHIC magnets was modified to eliminate the use of liquid-helium circulating pumps, more efficient heat exchangers were installed, and a seventh turbine was added to the existing six in RHIC's refrigeration system.

These upgrades further reduced the helium flow-rate and the compression ratio needed by the refrigerator, thus decreasing electrical power consumption and component wear. The Ganni Cycle had reduced electric power consumption for cooling RHIC from 9.2 MW to 7.2 MW in 2003, and the completion of the upgrade brought about another 2.2 MW reduction.

The Ganni Cycle improved the cryogenic system's reliability, availability, stability, and efficiency. The technology effectively reconfigured the RHIC refrigeration computer- control system to match the amount of helium being compressed with the heat load from the RHIC magnets.

"The Ganni system increases plant capacity very efficiently when we need it and decreases it when we don't need it, all automatically via computer," Than said.

Than explained that RHIC's cryogenic plant was originally built for ISABELLE, a collider that was to be constructed in the RHIC tunnel but was cancelled in 1983. The plant has three times the cooling capacity necessary for RHIC. Thus, in order to run efficiently, the plant needed to be operated at a lower capacity. It had 15 MW of compressor power available, but it started operations requiring 9.2 MW of compressor power to cool RHIC. Modifications, such as the Ganni Cycle, made during the three-phase upgrade of the plant have helped to reduce the power required to 5 MW. The Ganni Cycle was particularly helpful in allowing the plant to be turned up to efficiently match RHIC's lower cooling load.