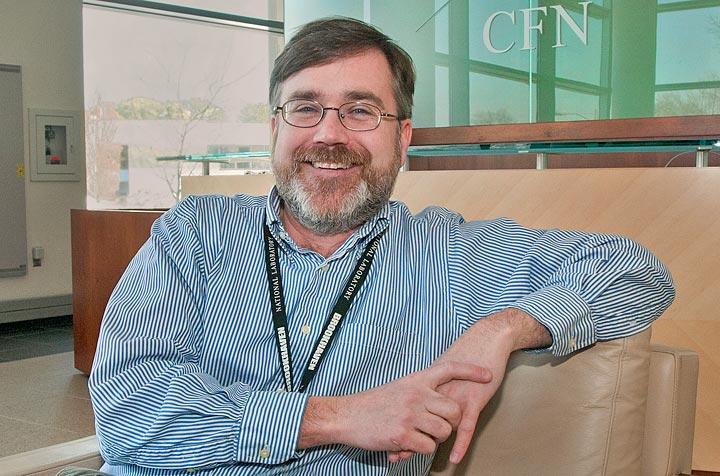 To advance this work, Eric Stach, Group Leader for the Electron Microscopy Group in Brookhaven’s Center for Functional Nanomaterials (CFN), has been named Special Assistant for Operando Experimentation for the Energy Sciences Directorate, effective February 1, 2015.

"There is an incredible suite of instruments at the CFN and coming on line at NSLS-II that will position Brookhaven as a world leader in these areas. I look forward to being a part of the effort.”

“I am really excited to serve Brookhaven in this role,” Stach said. “Since moving here five years ago, I’ve been working with colleagues to develop improved methods for operando studies in catalysis and energy storage.  There is an incredible suite of instruments at the CFN and coming on line at NSLS-II that will position Brookhaven as a world leader in these areas. I look forward to being a part of the effort.”

“Eric is an outstanding and innovative scientist who has made significant contributions to not just electron microscopy, but also Brookhaven’s entire portfolio of energy research,” Misewich said. “He is a key part of ongoing collaborations between CFN and NSLS-II, and I have no doubt about the high-caliber discoveries on the horizon.  I am very excited about our growing operando capabilities, which are crucial to the Laboratory’s increasing emphasis on energy solutions.”

Operando experimentation allows researchers to simultaneously characterize a material while precisely measuring its performance and function. For example, this allows scientists to track how the crystal structure of a battery electrode changes as the battery moves through cycles of charge and discharge. This holistic portrait of the technology in action opens new pathways to improve performance and design.

Brookhaven Lab researchers excel at operando work in part because of their expertise in using both photons at NSLS-II and electrons at CFN for imaging, diffraction, and spectroscopy studies. Brookhaven’s Center for Data-Driven Discovery also offers an important tool to staff scientists and the user community, as it will enhance analysis of CFN and NSLS-II data and accelerate the discovery of new materials.

After obtaining a B.S.E. degree 1992 from Duke University, Stach earned a M.S.M.S.E from the University of Washington and a Ph.D. in materials science and engineering from the University of Virginia in 1998.  From there, he served as a staff scientist and principal investigator at the National Center for Electron Microscopy at Lawrence Berkeley National Laboratory until 2004.  In 2005, Stach joined the School of Materials Engineering, Purdue University as an Associate, then Full Professor, and in 2010 came to Brookhaven National Laboratory and was named Scientist and Group Leader of the Electron Microscopy Group at the CFN.  Stach is credited more than 250 publications and was awarded the Microscopy Society of America’s Eli F. Burton (Young Scientist) Award in 2009, and in 2013 he was named a Fellow of the Microscopy Society of America.