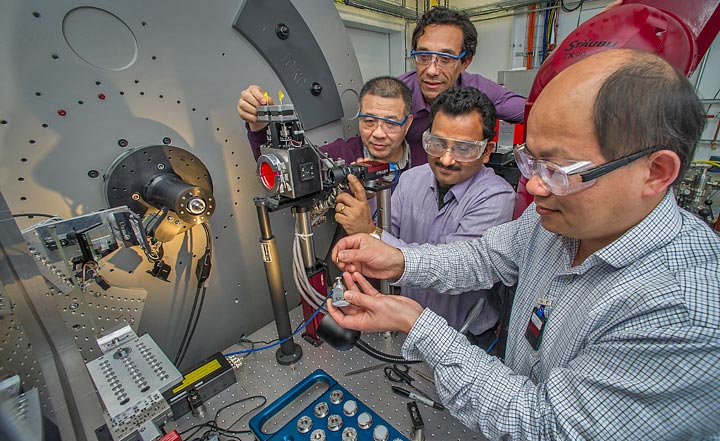 Lithium-ion batteries are an important component of modern technology, powering phones, laptops, tablets and other portable devices when they are not plugged in. They even power electric vehicles. But to make batteries that last longer, provide more power, and are more energy efficient, scientists must find battery materials that perform better than those currently in use.

At the U.S. Department of Energy's Brookhaven National Laboratory, a team of researchers has studied one member of a class of materials, called transition metal fluorides, that are potential cathodes for future lithium (Li) ion batteries. They discovered that adding copper atoms to one member of this class, iron fluoride, produces a group of new fluoride materials that can reversibly store lithium ions, and can store three times as many as conventional cathode materials. Moreover, measurements indicate that these new materials could yield a cathode that is extremely energy-efficient.

This research is described in the March 26 issue of Nature Communications.

Inside a Li-ion battery, the ions shuttle back and forth between two electrodes, the positively charged cathode and the negatively charged anode. As the cathode takes in ions, the battery discharges and provides power. When the cathode can accept no more ions, the battery is depleted. Then, when the device is plugged in to recharge, the ions are pulled back across to the anode. As a result, one of the key parameters of a battery’s performance is how many ions it can store. Current cathode materials (typically made of lithium, additional metals, and oxygen) have ion-storage capacities that are relatively limited.

The transition metal fluorides, which contain the element fluorine plus one or more of the transition metals, such as iron and copper, have much higher ion-storage capacities than traditional cathodes. This is partly because they work differently. While a conventional cathode stores ions between the layers of its molecular structure, called “intercalation,” the metal fluorides store them via a reversible electrochemical reaction, called a conversion reaction. During this multi-step process, the metals oxidize (lose electrons) and break from the fluorine atoms. The lithium ions then bond temporarily to the fluorine atoms.

Development of the metal fluorides for battery applications has stalled, however, due to some significant drawbacks. For example, copper fluoride (CuF2), has a very high potential voltage as a cathode material but low electrochemical activity; additionally, its conversion reaction is not reversible. Other candidates, the iron fluorides (FeF2 and FeF3), are reversible but their working voltages are low and they are not energy-efficient enough.

“Despite the large amount of research into the single-metal fluorides, there has been surprisingly little work done to study the conversion reactions in multiple-metal fluorides, also called mixed-cation fluorides,” said the study's lead author, Feng Wang, a physicist in Brookhaven's Sustainable Energy Technologies Department. “We have gained important insight into those reactions and, at the same time, have overcome some of the issues that have slowed the development of the metal fluorides, opening a door to exciting new research.”

The paper's other authors are Sung-Wook Kim, Liping Wang, and Dong Su of Brookhaven Lab; Dong-Hwa Seo and Kisuk Kang of Seoul National University (Korea); and John Vajo, John Wang, and Jason Graetz of HRL Laboratories, LLC. The studies were conducted at two DOE Office of Science user facilities, the National Synchrotron Light Source (NSLS, now closed and replaced by the new NSLS-II) and the Center for Functional Nanomaterials. Their work builds on two other studies recently published in the Journal of the American Chemical Society and Nature Communications, which reveal the merits of FeF2 for use in batteries, particularly for achieving highly reversible lithium conversion reactions. 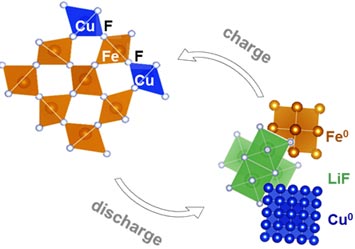 Using that research as their foundation, the group began with FeF2 and then incorporated copper atoms into the iron lattice. They synthesized many samples, containing different ratios of copper and iron, and studied them “in operando” (in real time under real operating conditions), simultaneously tracking the samples' reactivity and structural properties. The network of iron atoms “traps” the copper atoms and results in a cooperative oxidation reaction, ultimately allowing the copper ions to undergo the reversible redox reaction. Moreover, the reaction is achieved with an extremely low voltage “hysteresis.” This parameter is a measure of how strongly the reaction draws on the voltage of the system; in short, it is a measure of how energy-efficient the cathode is during the charging process.

“We were surprised that the measured hysteresis is so low. In fact, it is the lowest reported yet in any of the metal fluorides, indicating the potential for achieving high-energy efficiency in cathodes made with them,” said Wang. “And in a broader sense, this work shows that the addition of a second positive ion may provide a new avenue for tailoring key electrochemical properties of conversion-type electrodes.”

“This research is notable not only because of its implications for lithium-ion battery development, but also because it demonstrates how the development of in-operando synchrotron x-ray techniques can be used to track the real-time chemical reactions in cutting-edge materials as they are being cycled,” said J. Patrick Looney, chair of Brookhaven's Sustainable Energy Technologies Department. “The design and development of new materials via in-operando and in-situ studies is in keeping with Brookhaven's long-term research goals, as well as those of DOE.”

A patent related to this work was filed in January of this year, titled “High-Energy Cathodes for Lithium Rechargeable Batteries.” The patent positions this metal fluoride as a low-cost upgrade for the cathodes in existing Li-ion batteries and is aimed at possible commercial applications. As in the journal paper, the patent application describes how the material was characterized and tested. But it also provides additional details into how the material is synthesized and the steps to fashion it into a working cathode.

“It is exciting to see new battery chemistries tested and coupled using synchrotron tools, to fast-pace the research and development of longer lasting, more efficient and more durable batteries by finding materials with increased energy densities,” said Connie Cleary, Manager of Brookhaven's Office of Technology Commercialization & Partnerships, which helps researchers partner with industry to develop their discoveries. “This research is aimed directly at that goal and may lead to a better understanding of what it will take to increase the capability of rechargeable batteries.”

The samples were made into test cells and their electrochemical behavior measured as the cell was discharged and charged. The measurements show that the system's electrochemical properties are guided by the cooperative oxidation and reduction (collectively known as redox) that occurs when the copper and iron are sitting on the same lattice.

The group achieved further insight into the redox reactions, and corroboration of the electrochemical measurements, using in-operando x-ray absorption spectroscopy techniques at NSLS. X-ray beams were aimed at the samples as they charged and discharged. As they passed through the sample, some of the x-rays were absorbed. These absorption patterns give the scientists a way to “see” what was happening in the cell in real time. The techniques are element-specific, meaning they are tuned to return information about a single element, such as copper.

The x-ray data show that, on discharge, as lithium ions enter the cathode, the copper conversion occurs first, followed by the iron conversion at lower voltages. The copper-iron and iron-fluoride bonds break, yielding to the lithium ions, while metallic copper-copper and iron-iron bonds form between the freed metal atoms. Upon charging, the copper-iron bonds reform, as evident by a strong peak in the x-ray absorption data that is nearly identical in position and shape to the original material – another hallmark of good reversibility.

Further x-ray data was taken to learn more about what happens to the copper atoms after the first discharge and charge cycle, and into the second discharge. The researchers note an issue with copper ions dissolving, which leads to a breakdown of cell performance. They suggest possible mitigation methods, such as surface coatings to stabilize the electrode at high potentials or barrier layers to prevent copper ion crossover. These fixes may be explored in future studies.

“Down the road, we plan to closely examine how they degrade after repeatedly absorbing and releasing lithium, in order to find remedies for this behavior. The new NSLS-II XPD beamline, designed for in-situ and operando studies of materials, is the ideal tool for imaging the full local and global structure of our samples during cycling, in real time and under real-world reaction conditions,” Wang said.

This research was initiated as part of the Northeastern Center for Chemical Energy Storage, one of the Energy Frontier Research Centers (EFRC) funded by the U.S. Department of Energy's Office of Science, under Award Number DE-SC0001294; and also partially supported by another EFRC center, the Center on Nanostructuring for Efficient Energy Conversion, under award number DE-SC0001060. The in-operando studies were supported by the DOE Office of Energy Efficiency and Renewable Energy under the Batteries for Advanced Transportation Technologies (BATT) Program (being incorporated into the new Advanced Battery Materials Research program) under contract number DE-AC02-98CH10886 (recently changed to DE-SC0012704). Other sources of support include the Human Resources Development program (20124010203320) of the Korea Institute of Energy Technology Evaluation and Planning (KETEP), funded by the Korea government Ministry of Trade, Industry and Energy.