504th Brookhaven Lecture on Wednesday, 4/29: 'Catching Catalysis in the Act: In Situ Studies With X-Rays and Electrons' 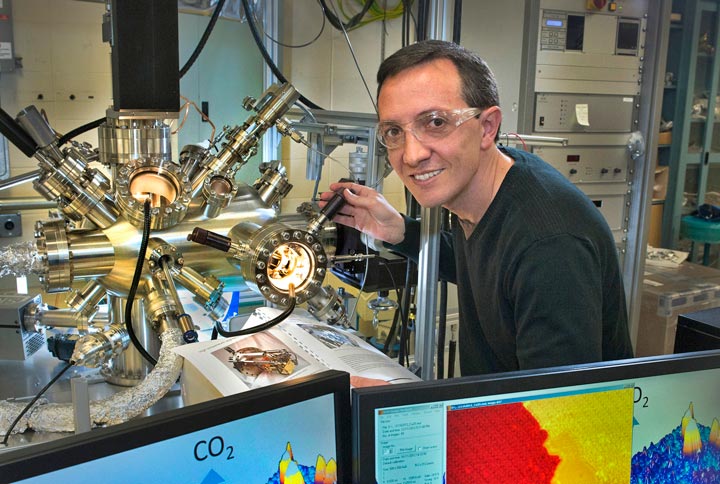 Darío Stacchiola of the Chemistry Department at Brookhaven Lab, who will give the 504th Brookhaven Lecture in Berkner Hall at 4 p.m. on Wednesday, April 29

Long story short: Catalysts increase the rate of chemical reactions. The catalytic converters in car and trucks convert poisonous pollutants into less harmful exhaust. Catalysts are also used in making fertilizers and fuels in addition to many other industrial chemical processes around the world.

With recent and developing capabilities at state-of-the-art research facilities like the Center for Functional Nanomaterials and National Synchrotron Light Source II at Brookhaven Lab, scientists are working to further their understanding of catalysts by addressing a major question not yet answered: Just how do catalysts do what they do?

Scientists are using advancing technologies and techniques to watch chemical reactions in situ—as they happen in real time—for never-before-seen, step-by-step views of catalysts in action at the atomic level. These observations are providing new insights that could lead to more effective, more efficient catalysts for industrial processes and cleaner fuels in the future.

Join Darío Stacchiola of the Chemistry Department for the 504th Brookhaven Lecture, titled "Catching Catalysis in the Act: In Situ Studies With X-Rays and Electrons," in Berkner Hall at 4 p.m. on Wednesday, April 29. All are invited to attend this free talk, which is open to the public. Refreshments will be offered before and after the lecture. Visitors to the Lab 16 and older must carry a photo ID while on site. Add to calendar

Stacchiola will begin his talk with a brief introduction to catalysis and the in situ studies, in which scientists are now watching catalysts in action. He will then discuss his research, highlighting two important catalytic processes that are essential for producing industrial quantities of cleaner fuels to help meet the world's energy needs.

To join Stacchiola for dinner at a restaurant off site after the talk, contact Linda Sallustio (Ext. 4303).

Stacchiola, a chemist in Brookhaven Lab's Chemistry Department, arrived at the Lab as a research associate in 2007. He earned a Ph.D. in physical chemistry at the University of Wisconsin-Milwaukee in 2002 and a bachelor's degree in physics at the Universidad Nacional de San Luis in Argentina in 1996. He was named a Humboldt Research Fellow for postdoctoral research at the Fritz Haber Institute of the Max-Planck Society in Germany from 2005 to 2007. He has authored or coauthored more than 110 scientific papers, including publications highlighting the new set of in situ capabilities and the conversion of carbon dioxide to methanol, and is also an adjunct assistant professor in the Chemistry Department at Michigan Technological University.