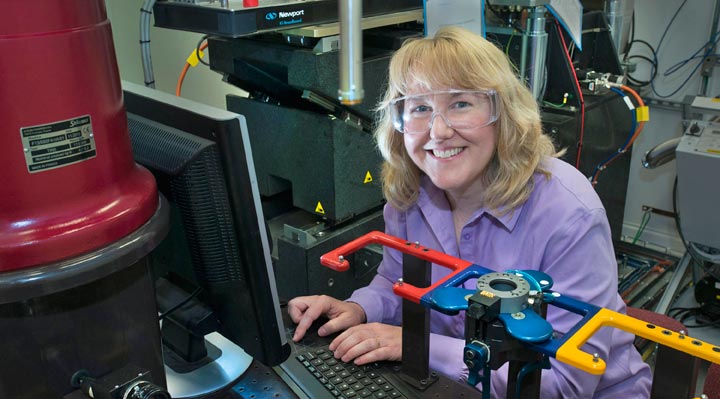 Lynne Ecker of the Nuclear Science & Technology Department at Brookhaven Lab, who will give the 505th Brookhaven Lecture in Berkner Hall at 4 p.m. on Wednesday, May 27

Depending on your location, the electricity powering the device you're using to read this article may have been produced at one of the 61 commercial nuclear power plants operating in the United States today. In fact, nearly one fifth of all electricity produced in the United States in 2014 came from nuclear power plants, according to the U.S. Energy Information Administration.

These plants are important for producing energy we need while meeting carbon reduction goals, but like roads and bridges across the country, the nation's nuclear power plants are aging and the materials inside are degrading. Today, scientists at Brookhaven Lab are using new tools—including the National Synchrotron Light Source II (NSLS-II)—to study steels and collect huge amounts of data to help determine how to safely extend the lives of both existing plants and those that could be built in the future.

Join Lynne Ecker of the Nuclear Science & Technology Department for the 505th Brookhaven Lecture, titled "Scanning the Structure of Steel From Nuclear Reactor Vessels," in Berkner Hall at 4 p.m. on Wednesday, May 27. All are invited to attend this free talk, which is open to the public. Refreshments will be offered before and after the lecture. Visitors to the Lab 16 and older must carry a photo ID while on site. Add to calendar

Ecker will begin this talk by explaining the molecular process of how materials inside nuclear reactors degrade, becoming brittle over time. She will also discuss the new capabilities at NSLS-II—including an automated system, complete with a robot that loads and unloads samples—for collecting large amounts of data from different steel alloys to monitor and understand their performance.

To join Ecker for lunch at a restaurant off site after the talk, contact Jean Frejka (Ext. 2349).

Ecker is deputy chair of Brookhaven Lab's Nuclear Science & Technology Department and leads the Advanced Materials for Energy Systems Group. She attended Syracuse University, where she earned a bachelor's degree in physics, master's degree in mechanical engineering, and Ph.D. in solid state science and technology. She was a scientist at Lockheed Martin from 1996 until 2004, the year she joined Brookhaven Lab.