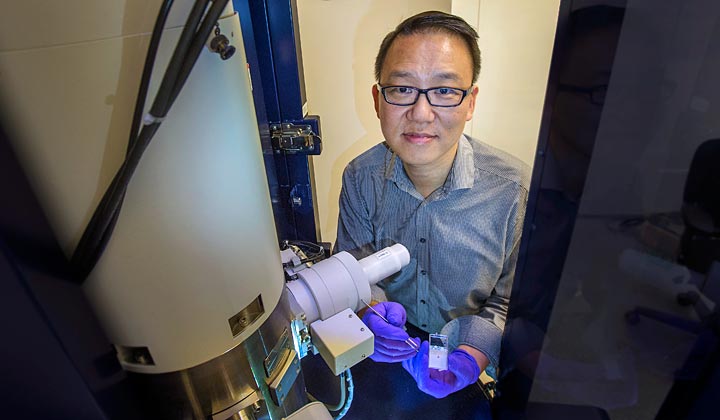 Dong Su of the Center for Functional Nanomaterials at Brookhaven Lab

As you tap and swipe through text messages, missed calls, and Facebook posts, lithium ions are flowing through the rechargeable, pocket-sized power plant that keeps your phone's screen glowing. Beyond cell phones, batteries have become an integral part of modern life, providing portable power for pacemakers that correct abnormal heartbeats and motors pushing electric cars up to speed. And as we increasingly rely on alternative energy sources like solar and wind, lithium ion batteries could store the electricity we need to power homes, businesses, and more, ensuring that power is still available after the sun sets and winds die down.

Scientists at Brookhaven Lab are helping lead the charge in the pursuit of more powerful, more efficient batteries. At the Center for Functional Nanomaterials (CFN), a U.S. Department of Energy User Facility at Brookhaven, they are working with state-of-the-art imaging tools to track lithium ions in situ—in real time—as they migrate through battery systems when the systems are charged and discharged. Deepening our understanding of the chemical reactions that occur inside batteries could help in designing materials for better batteries that can store more energy, recharge faster, and endure more discharge-recharge cycles.

Join Dong Su for the 507th Brookhaven Lecture, titled "Tracking Ion Migrations at the Nanoscale in Rechargeable Batteries," in Berkner Hall at 4 p.m. on Tuesday, Sept. 29. All are invited to attend this free talk, which is open to the public. Refreshments will be offered before and after the lecture. Visitors to the Lab 16 and older must carry a photo ID while on site. Add to calendar

Su will begin this Brookhaven Lecture by discussing progress in research on rechargeable batteries. He will then explain how he and his colleagues at the CFN are using advanced microscopy tools that rely on electron beams—not light, like traditional and other advanced microscopes—to study materials and determine how different atomic-level structures can improve performance for rechargeable batteries.

To join Su for dinner at a restaurant off site after the talk, contact Donna Storan (Ext. 2716).

Su is a scientist at Brookhaven Lab and an adjunct professor in Stony Brook University's Department of Materials Science and Engineering. He earned a Ph.D. in condensed matter physics at Nanjing University in China in 2003 and was a postdoctoral researcher at the Ecole Polytechnique Fédérale de Lausanne in Switzerland from 2004 to 2005, the University of Illinois from 2005 to 2006, and Arizona State University from 2006, where he was promoted to research scientist in 2007. He joined Brookhaven Lab in 2008. He is a member of the American Physical Society, Material Research Society, and Microscopy Society of America.