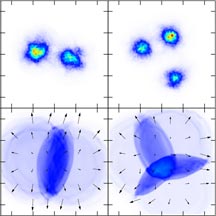 Experiments at the Relativistic Heavy Ion Collider (RHIC), and later at the Large Hadron Collider (LHC), have shown that collisions of two large nuclei such as gold or lead melt protons and neutrons to “free” their constituent quarks and gluons, creating a very hot, dense soup of matter’s fundamental building blocks. This “quark-gluon plasma,” or QGP, behaves like a nearly perfect liquid, where particles flow with virtually no resistance. More recent experiments at RHIC and the LHC hinted that smaller particles such as protons and deuterons could also create tiny QGP hot spots when they collide with larger nuclei. PHENIX scientists recently confirmed this by detecting patterns of friction-free particle flow that mimic the geometry of the colliding particles, specifically deuterons and helium-3 nuclei. At Quark Matter 2015 PHENIX will present brand new data from proton-gold collisions, conducted for the first time at RHIC this past year, which add additional evidence to the case that even small collisions produce tiny drops of QGP.

One of the key questions now is whether the physicists can turn off the signatures of the QGP—given that the small systems, with their expected absence of QGP, were supposed to be control experiments, but are now looking more complicated than originally expected. To that end, RHIC scientists are turning another dial: analyzing data collected over a wide range of collision energies. With data taken at 14.5 billion electron volts (GeV) in 2014 filling in the spaces between data at lower and higher collision energies, RHIC has now completed the first phase of this “beam energy scan.”

At Quark Matter 2015, the STAR collaboration will present preliminary results showing that the “friction-free” flow pattern of QGP persists to the lowest RHIC energy for central gold-gold collisions, but apparently disappears for peripheral (off-center) collisions below 14.5 GeV. A future beam energy scan exploring this trend in small system collisions  (for example, deuteron-gold) will test whether this is a consistent trend. 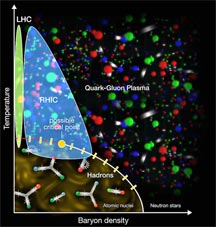 While RHIC data have shown that the early universe existed as a quark-gluon plasma with temperatures well above one trillion degrees Fahrenheit, the beam energy scan allows STAR and PHENIX to explore the characteristics of nuclear matter over a wide range of densities. This range includes conditions like those inside neutron stars, as well as the phase transition that occurs when ordinary nuclear matter “melts” to become QGP.

One thing they are looking for is evidence of a “critical point,” a certain temperature and density where the type of phase change shifts from a dramatic crossover between ordinary matter and QGP to a region where the two phases can coexist. Crossing over a critical point is expected to cause dramatic fluctuations or changes in many properties of the plasma. New results presented at Quark Matter 2015 add qualitative evidence for long-anticipated trends (for example, a reduction in the QGP pressure with consequences for flow patterns and QGP lifetimes). Some of the existing results from STAR along with new net-charge fluctuation results from PHENIX continue to show steady trends toward lower beam energies. Several important measurements sensitive to the pressure built up in the QGP seem to exhibit interesting trends with peaks and dips at an energy range near 15-20 GeV. STAR will add another measurement to this list enhancing the case for follow-up measurements. New STAR data on critical fluctuation measures with 14.5 GeV collisions also offer intriguing hints of a substantial rise for the lowest collision energies, though with uncertainties that are too large to draw strong conclusions at this time. Overall, the trends and features in the data call for a strong theoretical analysis and a closer look using a second phase beam energy scan planned for 2019 and 2020, after further accelerator and detector upgrades.

Restoration of a crucial symmetry and effects from fleeting fields 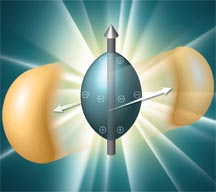 Both STAR and PHENIX will present data on the production of particles in RHIC collisions that indicate that a fundamental symmetry of nature is restored in QGP, namely “chiral symmetry”—the independent identities of left- and right-handed particles. Breaking and restorations of fundamental symmetries are common characteristics of phase transitions, including presumably the transition to QGP. There had been disagreement between STAR and PHENIX in certain measurements using pairs of electrons and anti-electrons, but the latest data from PHENIX, making use of a higher precision “hadron blind detector” now agree with the earlier STAR results. This now consistent data will advance comparisons with the theory that describes the strong nuclear force to explore this particular example of symmetry restoration.

STAR will also present results from collisions of gold ions with smaller copper ions that add evidence to the case that fleeting fields created by the collision (electric or magnetic) can affect the behavior of charged particles in the QGP in a way that relates to this chiral symmetry restoration. The new measurements of how differently charged particles flow directly from the copper-gold collisions indicate that a small number of quarks can be affected by an electric field created when the larger gold ion collides in a glancing way with the smaller copper ion. Only a small number of quarks are affected—those present at the earliest stage of the collision, before the field dissipates—making it clear why multiple measures are necessary to demonstrate the subtle effects of the ever-changing conditions of the plasma.  Complementing these results, PHENIX has submitted for publication results on flow patterns from the copper-gold collisions.

Charm and beauty in the QGP 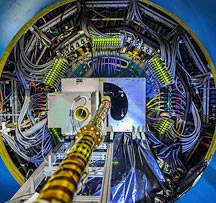 Early theory calculations predicted that heavy quarks known by the exotic names “charm” and “beauty” would plow right through the QGP like a massive bowling ball crashing through a set of pins. But early measurements show that charm quarks, at least, get pushed around in the plasma, as if they are getting caught up in the perfect liquid flow pattern. New results making use of refined detector components at both STAR and PHENIX are allowing scientists to study in detail the behavior of these heavy quarks (for example, their momentum), and to separate the findings for each of the varieties.

STAR presents the first results from a new “heavy-flavor tracker” component of their detector that reconstructs the decay of these elusive particles. STAR’s results indicate that heavy quarks move smoothly with the QGP, but are not completely thermalized. The PHENIX results reveal that beauty quarks, which are four times heavier at rest than charm quarks, are pushed around somewhat less in the flowing QGP. These measurements are helping to reveal the remarkable strength of the collective motion of the perfect liquid quark-gluon plasma and the strength of the interactions between the different quark species and the plasma’s constituents. In addition, STAR presents new results on certain heavy quark-antiquark pairs (J/psi and Upsilon particles) to demonstrate the performance of its new muon telescope detector.

Using jets to probe the QGP 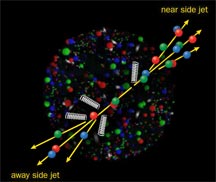 Just as charm and beauty quarks probe the QGP, high-energy light quarks (up, down and strange) and gluons can serve as probes of the medium.  When they have very high energy, quarks and gluons will usually end up decaying into a splash of particles, all mostly moving in the same direction, called a jet. But before the parent quark or gluon decays, it has to zip through the QGP and, depending on how strongly it interacts with the plasma’s inner structure, loses energy in a process called jet quenching. The way that the high-energy quarks and gluons decay into a jet of particles can reveal important details about the properties of the plasma.

In a collision producing thousands of particles, it can be a challenge to know which particles are part of a jet and which came from the exploding QGP. Generally, if there is a high-energy quark or gluon shooting off in one direction, you’d expect to find one of equally high energy shooting in the opposite direction. STAR exploits this feature and selects cases where a very high-energy particle is observed going in one direction and then studies the characteristics of the jet of particles that must be going in the other direction. The studies look at whether the particles in the jet are getting spread out and if they end up with more or less energy than would be expected for a jet not hindered by the presence of a QGP. STAR shows that the jets they measure lose less energy in the QGP than those measured at the LHC and that there are fewer particles in the jet than had been expected.

PHENIX has previously published results on the behavior of single-particle components of jets, but will now present the first-ever “fully reconstructed” jets from deuteron-gold and copper-gold collisions. These results show how the behavior of multiple particles evolves from an initial high-energy quark or gluon traversing the collision zone, and appear to indicate that jet quenching kicks in as the violence of the collisions increases. These first results are somewhat puzzling to scientists, but consistent with what’s been observed in proton-lead collisions at the LHC. RHIC scientists hope to explore the phenomenon more thoroughly using a proposed future detector known as sPHENIX, which is designed with comprehensive capabilities for reconstructing jets. 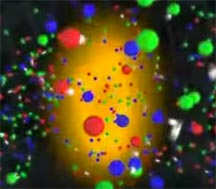 Like anything hot, the matter produced in RHIC’s collisions emits particles of light, or photons. At the instant of collision, before the matter begins to flow like a perfect liquid with an elliptical shape, there are lots of photons emitted in all directions. But PHENIX data show that fractions of a second later, as the matter begins to flow, the pattern of photons appears to take on this sense of shape in terms of the quantities of photons measured coming from the collision from different directions. This is intriguing because photons shouldn’t interact with the matter—or even be produced in such measurable quantities as the matter produced in the collisions cools and expands. PHENIX scientists are looking forward to a discussion of this puzzle.

Research at RHIC is funded primarily by the U.S. Department of Energy’s Office of Science (NP) and by these agencies and organizations.