Kobe, JAPAN—Scientists intent on unraveling the mystery of the force that binds the building blocks of visible matter are gathered in Kobe, Japan, this week to present and discuss the latest results from "ultrarelativistic nucleus-nucleus collisions." Known more colloquially as Quark Matter 2015, the conference convenes scientists studying smashups of nuclei traveling close to the speed of light at the world's premier particle colliders—the Relativistic Heavy Ion Collider (RHIC) at the U.S. Department of Energy's Brookhaven National Laboratory, and the Large Hadron Collider (LHC) at the European Center for Nuclear Research (CERN). These collisions momentarily recreate the extreme conditions of the early universe so scientists can study quarks and gluons, the building blocks of ordinary protons and neutrons, as they existed and interacted nearly 14 billion years ago, before becoming bound by the strong nuclear force to form the atoms of the visible universe today. 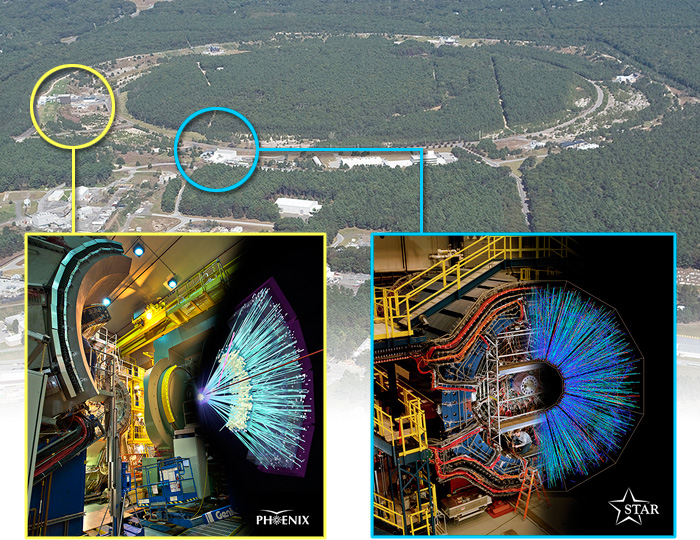 The PHENIX and STAR detectors (insets) are located at points on the 2.4-mile-circumference Relativistic Heavy Ion Collider where the two collider rings intersect so particles can collide. Tracing the paths of particles created in these collisions reveals information about the building blocks of ordinary protons and neutrons as they existed and interacted nearly 14 billion years ago.

"These results are the product of the ever-improving capabilities of the RHIC detectors and the accelerator."

The last few years have yielded a series of intriguing results that RHIC, in particular, has the unique ability to explore in depth by colliding many different types of nuclei over a wide range of energies. Members of STAR and PHENIX, the two scientific collaborations conducting nuclear physics research at this DOE Office of Science User Facility—along with theorists analyzing and guiding the research and colleagues working on complementary studies at the LHC—are eager to share the latest insight. 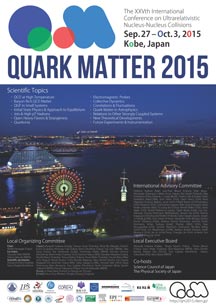 "We're particularly excited about the breadth of new results that PHENIX will be showing in Kobe," said Brookhaven physicist Dave Morrison, a co-spokesperson for the PHENIX collaboration. "We explain our key analyses in scientific papers that we've recently submitted to peer-reviewed journals."

"STAR will be presenting the first scientific results from recent detector upgrades, which showcase our ability to probe the behavior of distinct types of particles over a wide range of energies," said Brookhaven physicist Zhangbu Xu, spokesperson for the STAR collaboration. "These data are helping us map out the only phase diagram involving the strong nuclear force and lay the foundation for future experiments at RHIC."

A Perfect Celebration of Japanese Collaboration

The Quark Matter conference takes place approximately every 18 months at various international venues. The last time it was held in Japan was in 1997, prior to the completion of construction of RHIC and long before the startup of the LHC. This year's meeting is therefore a celebration of the exciting physics program that has grown since that time, thanks in part to crucial contributions from Japanese scientists.

"RHIC's PHENIX collaboration, in particular, has had a strong international partnership with many scientists and institutions in Japan, who have provided key intellectual and technical leadership in our science program, including as partners in funding key detector systems and upgrades," said Brookhaven physicist Dave Morrison, a co-spokesperson for PHENIX. The entire RHIC enterprise has also benefitted greatly from the foundational Japanese role in the RIKEN BNL Research Center (RBRC)—a physics research center located at Brookhaven and formed by an international collaboration between the Lab and RIKEN, Japan's Institute of Physical and Chemical Research. In addition to their roles in heavy-ion physics, RIKEN and RBRC scientists have played key roles in developing and funding the accelerator capabilities that underpin the extremely successful spin physics research program at RHIC.

Restoration of a crucial symmetry and effects from fleeting fields

Charm and beauty in the QGP

Using jets to probe the QGP

"These are just the highlights among the many new results STAR and PHENIX are presenting at Quark Matter 2015," said Berndt Mueller, Associate Laboratory Director for Nuclear and Particle Physics at Brookhaven Lab. "They are the product of the ever-improving capabilities of these detectors and the accelerator. And they showcase how a global community of dedicated scientists is taking full advantage of RHIC's remarkable versatility to explore in depth the structure of nuclear matter over a wide range of temperatures and densities.

"As always," Mueller continued, "the discussions that take place during this meeting will play an important part in fine-tuning the future research plans at RHIC.  When many of the leading experts in the field convene at one place, the often quite heated discussions are certain to move the field forward."

Research at RHIC is funded primarily by the U.S. Department of Energy's Office of Science (NP) and by these agencies and organizations.