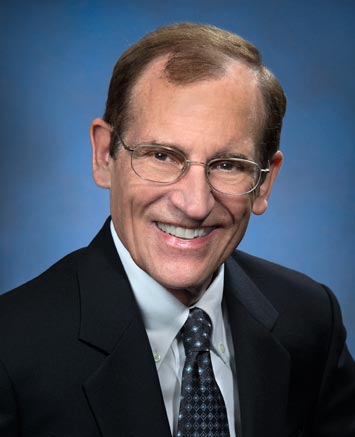 Robert Tribble, Brookhaven Lab’s deputy director for Science & Technology, has been awarded the 2015 American Physical Society's (APS) Division of Nuclear Physics (DNP) Distinguished Service Award. The award recognizes Tribble for his leadership skills and outstanding contributions to the field of nuclear physics for more than 30 years.

“I am honored to join the list of extraordinary awardees who have made significant contributions to nuclear physics, helping our nation maintain its leadership in this important field,” said Tribble. “In particular, I look forward to continuing the exploration of the building blocks and fabric of matter at Brookhaven’s Relativistic Heavy Ion Collider.”

Before coming to Brookhaven, Tribble chaired the Nuclear Science Advisory Committee (NSAC) for the U. S. Department of Energy and National Science Foundation from January 2006 until April 2009, and led the development of the 2007 Long Range Plan (LRP).  In that capacity, he played a key role in communicating the importance of the U.S. nuclear science program—including the research at Brookhaven Lab's Relativistic Heavy Ion Collider, a DOE Office of Science User Facility—and building support for an achievable path to maintain U.S. leadership in this field. In addition to the LRP effort and leading two contentious subcommittee reports (2005 and 2012) on implementing long range plans under constrained budget scenarios, Tribble served as a member of the DNP Executive Committee and also as chair of the committee.

“For his outstanding service over three decades on behalf of the Division of Nuclear Physics, for his skillful stewardship of the Division that strengthened its vitality as a unit of the American Physical Society, and for his extraordinary service on the Nuclear Science Advisory Committee, including his leadership of the NSAC long range planning process to the benefit of the Nuclear Physics community.”

The widely respected physicist has also been involved with numerous committees for APS and the NSAC.  He served on a global science forum panel that evaluated the state of nuclear physics facilities around the world, and was a member and chair of the International Union of Pure and Applied Physics Working Group 9 and the National Research Council survey for nuclear physics.

Tribble’s work spans a broad range of topics, including groundbreaking research exploring fundamental symmetries, the Standard Model, nuclear structure and reactions, nuclear astrophysics, and proton spin. He is widely credited with developing new tools and techniques that have advanced the field.

Tribble earned his B.S. with honors in physics from the University of Missouri, Columbia (1969), and his Ph.D. from Princeton University (1973). He joined the Texas A&M University faculty in 1975, served as department head of physics 1979-87, and served as director of the Cyclotron Institute. His numerous honors and awards include an honorary doctorate from Saint Petersburg State University, Russia (2009), various awards recognizing his excellence in teaching and research, and being named an Alfred P. Sloan fellow (1976-80) and a fellow of the American Physical Society (1982).