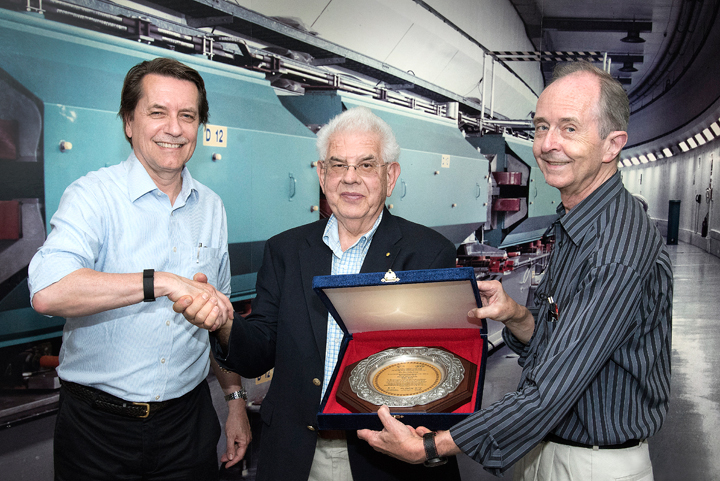 Derek Lowenstein (center) has been recognized with the first ever Xie Jialin Prize for outstanding work in the field of accelerator physics from the seventh annual International Particle Accelerator Conference. Brookhaven Lab's Associate Lab Director for Nuclear & Particle Physics Berndt Mueller (right) and Chair of the Collider-Accelerator Department Thomas Roser (left) presented him with the award on June 7.

Derek Lowenstein, a senior physicist who retired from the U.S. Department of Energy's Brookhaven National Laboratory in 2014 after 40 years, has been recognized for outstanding work in the field of accelerator physics. Lowenstein was honored with the first ever Xie Jialin Prize during the seventh annual International Particle Accelerator Conference on May 12 in Busan, Korea. Although Lowenstein could not attend the conference in Korea in person, he returned to the Lab site from his home in Houston, Texas, on June 7 and received the award during a special presentation with Associate Lab Director for Nuclear & Particle Physics Berndt Mueller and Chair of the Collider-Accelerator Department Thomas Roser.

Lowenstein was chosen as the first Xie Jialin Prize recipient by a selection committee led by committee chair Shin-ichi Kurokawa of Cosylab, based in Slovenia with satellite locations around the world, and the National Laboratory for High Energy Physics—KEK—in Japan. The namesake prize honors the late physicist and professor Xie Jialin, who helped shape accelerator programs in China.

“After my 40-plus-year career in accelerator science—with much more excitement in the field for years to come—I'm honored to receive this Xie Jialin Prize and I thank all the staff who have supported the accelerator program,” said Lowenstein.

In the citation, Lowenstein is recognized for his many years of leadership in the accelerator field—particularly for the Alternating Gradient Synchrotron (AGS) Booster and Relativistic Heavy Ion Collider (RHIC). The citation notes that Lowenstein led the construction of the AGS Booster, which culminated in the AGS achieving the world record for proton intensity. This work also formed the basis for the establishment of the NASA Space Radiation Laboratory, and Lowenstein was instrumental in establishing this dedicated facility to study radiobiological effects important for human travel in space to Mars or for other planetary missions.

Today, operations at RHIC continue as scientists test and expand the theory of Quantum Chromodynamics, which describes the strong force interactions between the quarks and gluons confined within the protons and neutrons of every atom's nucleus. Colliding polarized protons at RHIC allows scientists to explore how a proton's constituent particles contribute to this spin property. The AGS, a vital component in the Lab's accelerator complex, is home to three of Brookhaven Lab's seven Nobel Prize-winning discoveries.

“Derek’s contributions and leadership at Brookhaven Lab have made this the nation's premier hadron accelerator facility. He is most deserving of the inaugural Xie Jialin Prize,” said Brookhaven Associate Lab Director for Nuclear & Particle Physics Berndt Mueller. "Derek has not only been a great leader in Brookhaven's remarkable accelerator success, he had a presence in the international accelerator field," said Nick Samios, former Brookhaven Lab director and a senior scientist emeritus. Samios also remembered that Xie Jialin, for whom the prize was named, spent some time at Brookhaven Lab, was a strong friend, and a major force in China's accelerator program.

Lowenstein held leading roles for many of his 40 years at Brookhaven Lab—from 1973 to 2014. He earned a Ph.D. in physics from the University of Pennsylvania in 1969, and remained there as a postdoc until joining the University of Pittsburgh as a research associate in 1970. He arrived at Brookhaven Lab as an assistant physicist in 1973 and was promoted several times before being named chair of the AGS Department, a position he held from 1984 to 1999. He was chair of the Lab's Collider-Accelerator Department from 1999 until 2009. After stepping down as chair in 2009, Lowenstein continued working as associate chair for accelerator applications and education until retiring in 2014. Lowenstein was named a fellow of the American Physical Society in 2006, a Fellow of the American Association for the Advancement of Science, and has served on numerous national and international technical- and policy-focused committees for science.