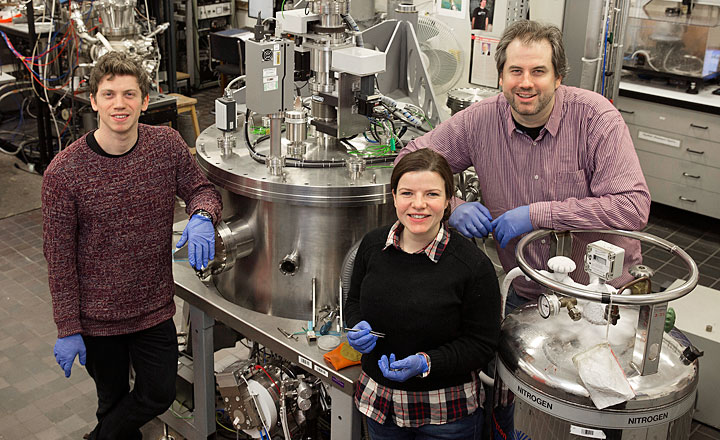 Christopher Marrows is a professor of Condensed Matter Physics in the School of Physics and Astronomy at the University of Leeds in the UK. He recently traveled to Brookhaven for beam time at NSLS-II's Coherent Soft X-Ray (CSX) beamline, where he and his collaborators studied the behaviors of an array of nanomagnets known as an artificial spin ice.

What are your research interests?

My group focuses on the study of materials for the next generation of information technology, with a particular focus on spintronics and nanomagnetism. Artificial spin ices are built out of nanomagnets and are experimental realizations, built using nanotechnology, of some of the celebrated models of statistical mechanics that were solved (or not!) by theorists in the past. That said, it is also possible to build new systems that have not yet been considered by theory. The beauty of the approach is that it is possible to design a new system on the back of an envelope and then realize it with our nanofabrication tools. We have complete control of all the parameters in these artificial materials, which is not possible when studying natural materials; one just has to investigate the crystal structures that nature presents for study. Magnetism has historically played a crucial role in statistical mechanics as the birthplace of simple models that can be applied throughout physics and beyond: for example, the celebrated Ising model of magnetism has been used to describe ordered alloys, forest growth, and the operation of financial networks.

Advances in this field not only give us new ways to study statistical mechanics in magnetism, but also have the potential for many different applications, and I find this to be very stimulating. Possibilities include high-density data storage, radio frequency applications, and maybe new forms of computation inspired by the neural structure of the brain. There is a real intellectual interest and sense of excitement. In the long run, my group is hoping that our work will lead to better understanding of nanomagnet systems, which are hugely important in many different future technologies.

What are you studying at NSLS-II?

At CSX, we wanted to measure the fluctuating magnetic states in an artificial spin ice, which is an array of nanomagnets arranged such that they influence each other. Those interactions are “frustrated,” meaning they can't be all satisfied at once – there isn't a unique state in which every magnet is “happy.” This, in turn, drives some unusual collective dynamics. We used the coherent x-ray beam to investigate a tiny piece of our sample that was about a few tens of microns across, but still contains several hundred nanomagnets.

The magnets in our sample are made of Permalloy, a magnetically “soft” material, which means that the properties of each nanomagnet is defined by its shape, and so can be engineered. The array as a whole is something like a metamaterial in that it has properties that emerge from all the interacting elements. In the particular sample that we studied at CSX, the magnets are arranged in a square grid, which acts as a two-dimensional diffraction grid when the x-rays are shone upon it.

We used x-ray photon correlation spectroscopy (XPCS), which is a technique often used to study condensed matter systems. It is based on the speckle pattern generated by the scattered coherent light from the beam. But our study was a special case because we used XPCS to study magnetism versus conventional structural changes.

Normally the x-rays would create a diffraction pattern of featureless spots. But with a coherent beam, you get a fine speckle pattern within each spot that results from the coherent interferences of the beam as it interacts with the sample. We used a wavelength of x-rays that is sensitive to the magnetism of Permalloy. This means that if anything in our sample changes, the speckle pattern also changes, and so we could measure this and hence learn about the time dependence of the magnetic states in our artificial spin ice. This tells us how the frustration affects the way that the nanomagnets fluctuate under thermal agitation and the type of states the system freezes into as it is cooled.

We used x-ray photon correlation spectroscopy (XPCS), which is a technique often used to study condensed matter systems. It is based on the speckle pattern generated by the scattered coherent light from the beam. But our study was a special case because we used XPCS to study magnetism versus conventional structural changes.

Why have you chosen NSLS-II for your research?

I was an NSLS user for many years, and in that sense it was natural for me to move to NSLS-II. But the real draw at CSX is the camera available at the beamline, which is world-class: it can take about 100 pictures of the scattering patterns every second. This provides us with more detailed clues into how the material behaves across a broader range of timescales.

What other researchers and/or students were part of this experiment?

I came to NSLS-II with two members my group, postdoctoral research fellow Sophie Morley and PhD student Jamie Massey. I was also joined by two colleagues: Sean Langridge, a professor and fellow at the UK Science & Technology Facilities Council, and Txema Porro Azpiazu, a postdoc at the same institution.