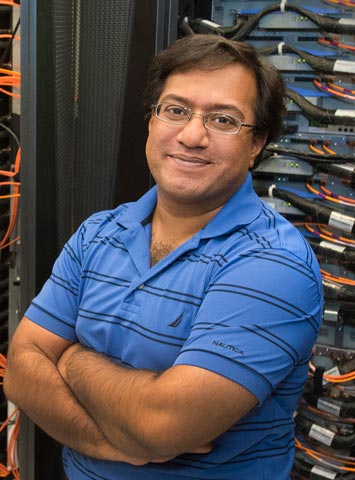 Swagato Mukherjee of the Physics Department at Brookhaven Lab

Up next during the 512th Brookhaven Lecture, Swagato Mukherjee will tell you about the "perfect" soup physicists can't get enough of. Not some thick, lumpy chowder—a nearly perfect liquid made from some of the universe's most basic ingredients. Plus, he'll show you "kitchens" around the world, where he's using powerful supercomputers to fine-tune the recipe.

Mukherjee, of the Physics Department, will present this lecture, titled "Quarks, Gluons & Lattice QCD: Cooking the 'Perfect' Soup With Supercomputers," in Berkner Hall at 4 p.m. on Wednesday, Feb. 24. All are invited to attend this free talk, which is open to the public. Refreshments will be offered before and after the lecture. Visitors to the Lab 16 and older must carry a photo ID while on site. Add to calendar

Mukherjee will begin the talk by introducing the subatomic quarks and gluons found in this perfect soup, and explaining how physicists study these particles and the strong force that holds them together using a four-dimensional grid and supercomputers that calculate equations with nearly a billion variables. He will then discuss how these calculations—and experiments at the Relativistic Heavy Ion Collider at Brookhaven Lab—are being used to determine the properties and phases of quark-gluon soup.

To join Mukherjee for lunch at a restaurant off site after the talk, contact Nicole Kelly (Ext. 3807).