The Coherent Soft X-ray Scattering and Spectroscopy (CSX-2) beamline at the National Synchrotron Light Source II, which hosted its first users in February, was built in partnership with the Center for Functional Nanomaterials 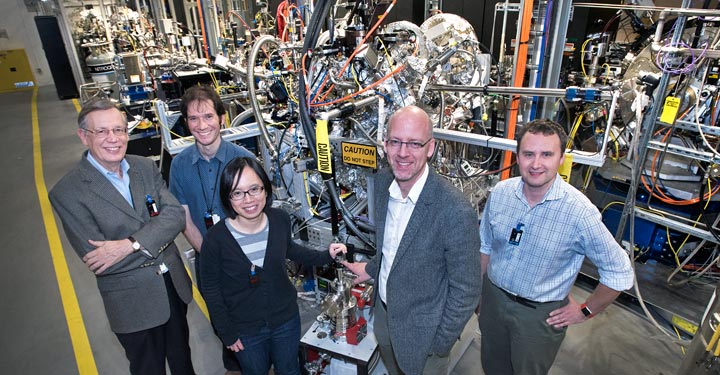 One of the most recent capabilities to begin hosting scientific users at the National Synchrotron Light Source II (NSLS-II) was built in partnership with the Center for Functional Nanomaterials (CFN), both of which are U.S. Department of Energy (DOE) Office of Science User Facilities located at Brookhaven National Laboratory.

The Coherent Soft X-ray Scattering and Spectroscopy (CSX-2) beamline provides soft x-rays that are perfectly suited to the research needs of catalysis scientists visiting Brookhaven’s nanocenter. Combining these x-rays with a CFN endstation is a perfect marriage then.

“The Center for Functional Nanomaterials is a cutting-edge facility in its own right, but now it’s also a path to bring users to NSLS-II,” said CFN Director Emilio Mendez. “I look forward to the innovative science made possible at the intersection of the capabilities at CFN and NSLS-II.”

“The synergy between our two institutions strengthens us both,” said John Hill, Director of NSLS-II. “Partnerships like the one with CFN allow us to make the most of the expertise and facilities that make Brookhaven unique.”

The CSX-2 beamline is well-suited to research in energy production and storage, with an emphasis on studying surface chemical processes relevant in heterogeneous catalysis in situ and in operando – as they would work in real time close to real world conditions. The beamline is also suited for studying processes in environmental and atmospheric chemistry.

“Most of our users study model systems for catalysis,” said Ira Waluyo, a beamline scientist at CSX-2 “They can bring samples ranging from single crystals to nanoparticles to the beamline, and when they expose the samples to the reactant gases, they study how the catalyst and reactants evolve during a reaction. When they increase the temperature of the sample or change the composition or pressure of the gases, they can study how the catalyst is transformed and what new chemical species are formed on the surface. Our users can then pinpoint what exactly makes a catalyst active in a particular reaction.”

The study of catalysts is an exploration of nanoscale interface science – research into the phenomena occurring as chemical reactions take place on the scale of a billionth of a meter. The ambient pressure photoelectron spectroscopy (APPES) endstation at CSX-2 allows scientists to do experiments that would normally require ultra-high vacuum conditions to be performed at pressures closer to realistic conditions.

“Allowing scientists to study materials for energy solutions in operando is one of the benefits here. The understanding of these interactions will help us to engineer catalysts that work better and cost less,” said Anibal Boscoboinik, a CFN staff scientist and partner at CSX-2. “Industrial researchers can use the gained knowledge to engineer catalysts for energy transformations at lower cost and with fewer environmental impacts.”

The APPES endstation was provided by CFN, while the infrastructure of the beamline was part of the NSLS-II Project. CSX-2 will dedicate about a quarter of its available research hours to scientific users from the nanocenter, while the rest of the time will be available for users from the light source.

“With the capabilities already available at the CFN and this new beamline, we have complementary techniques available to scientists,” Boscoboinik said. Compared to the X1A1 beamline at NSLS, where the APPES endstation was previously located, CSX-2 has a larger energy range, much higher resolution, and at least 100 times more flux  “This means we can now look at core levels we could not look at before and we get better quality data with better resolved features and less noise over a shorter period of time,” Waluyo said.

“This is an exciting time and we are thrilled to be part of it,” Boscoboinik said.