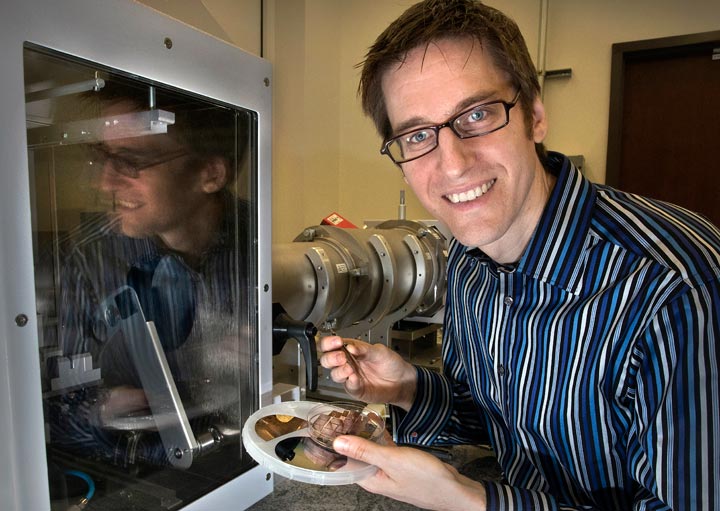 Kevin Yager of the Center for Functional Nanomaterials at Brookhaven Lab

Like all of us, atoms and molecules sometimes need a bit of encouragement to reach their full potential. With guidance and innovative positive reinforcement techniques, scientists at the Center for Functional Nanomaterials (CFN) at Brookhaven Lab are encouraging individual molecules to achieve together what they could not achieve on their own and assemble themselves in ways they ordinarily would not.

Join Kevin Yager of the CFN, a U.S. Department of Energy User Facility, for the 513th Brookhaven Lecture, titled "Manipulating Nanostructures With Light," in Berkner Hall at 4 p.m. on Wednesday, March 30. All are invited to attend this free talk, which is open to the public. Refreshments will be offered before and after the lecture. Visitors to the Lab 16 and older must carry a photo ID while on site. Add to calendar

Yager will begin his Brookhaven Lecture with a brief introduction to the nanoscale—the tiny world within our own where elements are so small they are measured in billionths of a meter. Yager will then discuss the light-based techniques and laser tools he has developed for arranging molecules into ordered patterns and specific shapes to fabricate more perfect, complex nanostructures.

To join Yager for dinner at a restaurant off site after the talk, contact Joann Tesoriero (Ext. 7791).

Yager is a materials scientist at Brookhaven Lab, where he is principal investigator on research projects to control nanomaterials and develop new measurement methods. Several of his projects are funded through Brookhaven's Laboratory Directed Research and Development program that provides support for highly innovative and exploratory research. Yager earned a bachelor's degree in 2001 and Ph.D. in 2006, both in chemistry at McGill University in Canada. While working toward his Ph.D., he collaborated with scientists at McGill and the Canadian Neutron Beam Centre. Yager was a guest researcher for the U.S. National Institute of Standards and Technology's Polymers Division from 2006 to 2009 before he arrived at Brookhaven Lab in 2010.