A Day in Their Boots: The Tough and Dirty Work of the Brookhaven Wildlife Interns 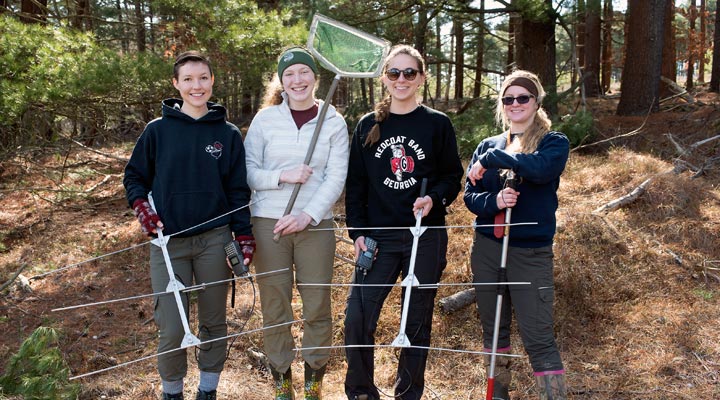 It’s a cold, wet morning at the U.S. Department of Energy’s (DOE) Brookhaven National Laboratory. The sun is still rising over the 32-megawatt solar farm on the Lab site, bouncing rays off the 200 acres of solar panels that feed the local power grid. It’s quiet and calm as a group of young women enrolled in DOE’s Science Undergraduate Laboratory Internship (SULI) program set out for the day’s work. They are bundled up in winter coats, waterproof pants, and large rubber boots—prepared for the muddy ponds and paths ahead. These are the wildlife interns. They spend their days outside—rain, snow, or shine—tracking and tagging the animals that make up a key component of the ecosystem at the Lab.

Lauren Gazerwitz, Chelsea Hinton, Mary Martin and Chloe Moore consider themselves the “Wildlife Avengers.” For the duration of their internship, they will be working to increase understanding of the 5,000-plus acres of pine-barrens habitat at Brookhaven Lab. Today, like each day, they drive their mud-covered truck to the humane small mammal catch-and-release traps located throughout the Lab site. They are keeping track of critters such as mice, moles, and voles to explore their populations and identify changes caused by forest and wildlife management.

“This project is part of my Ph.D. dissertation on how solar facilities impact wildlife,” said Jennifer Higbie, an employee in the Lab’s Environmental Protection Division and doctoral student at the University of Massachusetts, Amherst, who is serving as the students’ mentor. “Small mammals are good indicators of habitat and resource availability. I’m trying to determine if solar facilities can successfully provide habitat for wildlife. The students are going out every day to record the data, which they are also using for their own projects.”

Gazerwitz, a recent graduate from the University of New Hampshire, explains that this group of interns never grew out of the “constantly playing outdoors and climbing trees” phase of life. “It’s the best job,” she said. “I never want to sit behind a desk. This is what I was meant for.”

After small mammal trapping, the team checks the water level at several vernal pools, temporary ponds that are essential for wildlife survival. Tiger salamanders, for example, lay their eggs on vegetation in the pond.

Moore, a graduate from the University of Georgia, finds this to be one of the most interesting parts of the day. “I was really excited to see an adult tiger salamander for the first time because they are a New York State endangered species,” she said.

“A lot of species like the butterflies and insects that depend on the forest are of special concern,” said Gazerwitz. “That makes our work toward preserving the forest very important.” 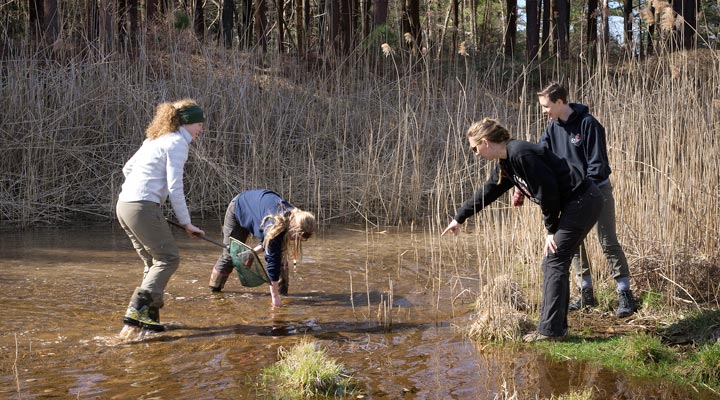 The wildlife interns do a number of tasks for the environmental protection division at Brookhaven, including population surveys, locating turtles and maintaining wildlife cameras.

Despite the sometimes-grueling conditions, the members of the close-knit group have a lot of fun. “This group of women is top notch,” said Hinton, who recently graduated from the University of the Cumberlands in Kentucky. “We are smart and strong. We all get along really well. We’re goofy, but we are also very passionate about everything we do.”

Gazerwitz said it can sometimes be tough being a young woman in this field. “It tends to be male dominated and I find that most of the top positions are held by men,” she said.

Martin, a recent grad of Colorado State University, added, “I’ve run across people who think ‘oh, you’re just a girl, you’re weak, helpless, incapable,’ but that just makes us want to be that much stronger and knowledgeable.”

In addition to assisting with Higbie’s research, each intern has her own project to complete. Moore is looking at how meteorological events impact eastern box turtles. Martin wants to know how stopping sewage treatment plant discharges into the Peconic River affects bird biodiversity. Hinton is studying site fidelity of the eastern box turtle population. And Gazerwitz is analyzing how the fire-prone pine-barrens ecosystem has changed over the past 10 years, with widespread fire-suppression policies in place.

But the team members care most deeply about the overall management of natural resources on the Lab site. “Ecology and wildlife science is something people take for granted. Everyone thinks about the Brookhaven Lab facilities, like the National Synchrotron Light Source II and Relativistic Heavy Ion Collider, and all of the physics and chemistry,” said Martin. “No one thinks about the 5,000 acres of ecosystem here at the Lab and the people who are working to protect it.”

Long Island’s pine-barrens ecosystem is one of only a few in the entire country, and conservation of the Lab’s portion is critical to the overall health of the forest.

“We are helping to understand and maintain the balance of this ecosystem,” said Hinton. “If you run a bulldozer through the forest for a construction project you are disrupting the entire forest. For example, box turtles take the same route to their nesting grounds every year. They don’t care if you built a road or a building in their path, they will continue to walk in the same direction. So, [construction projects can be] very damaging to their home and their health.”

That’s one reason Brookhaven Lab’s Environmental Protection Division is consulted before any construction projects take place on site. Under the National Environmental Policy Act, the DOE has to do an evaluation of the project and the area they plan to develop to determine the best course of action and minimize the impact on the environment.

“The management plans for any new construction take into consideration all possible environmental impacts, including to wildlife,” said Higbie. For example, when constructing the solar farm, the Lab requested small openings in the fences to allow smaller wildlife to enter and exit the facility.

Studying the Lab’s small mammal population is just one way that Higbie, the wildlife interns, and the Environmental Protection Division are working to understand the natural environment and to monitor how wildlife populations react to activities onsite.

At the end of the day, the wildlife interns park their truck outside their office and walk home together, laughing. Hinton, with a proud smile on her dirt-covered face says, “All of the dirt and grime that seeps into our pores and under our fingernails is going to something bigger.”

The interns hope to continue their careers through many different paths, such as teaching or working with non-profit organizations and doing research that benefits wildlife and ultimately, the planet.

“This is a wonderful group of interns.  They are independent and hardworking,” said Higbie. “They have been a pleasure to work with.”