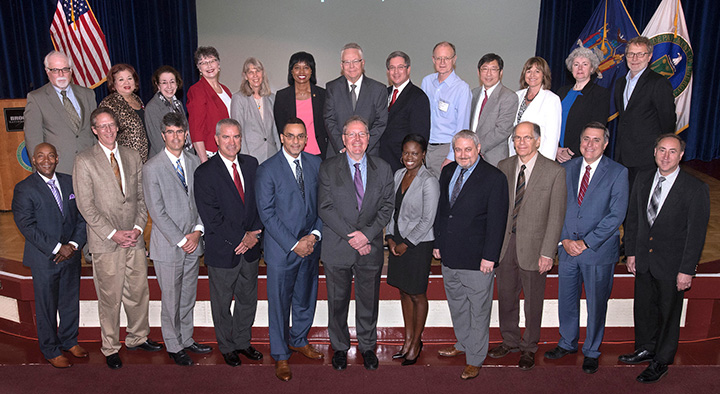 "Inclusion increases innovation" was the phrase that echoed across the U.S. Department of Energy's (DOE) Brookhaven National Laboratory as it hosted a two-day workshop focused on diversity and inclusion’s major role in innovation and discovery.

More than 300 people attended the diversity and inclusion workshop Sept. 7 and 8, including more than 200 Brookhaven Lab science and support staff plus an additional 100 participants who traveled from DOE, national laboratories from across the nation, and others from schools in the New York State region. All converged at Brookhaven to share best practices on how to foster more diverse, inclusive, and respectful workplaces that include a wider representation of women and other people underrepresented in science, technology, engineering, and math (STEM) fields. 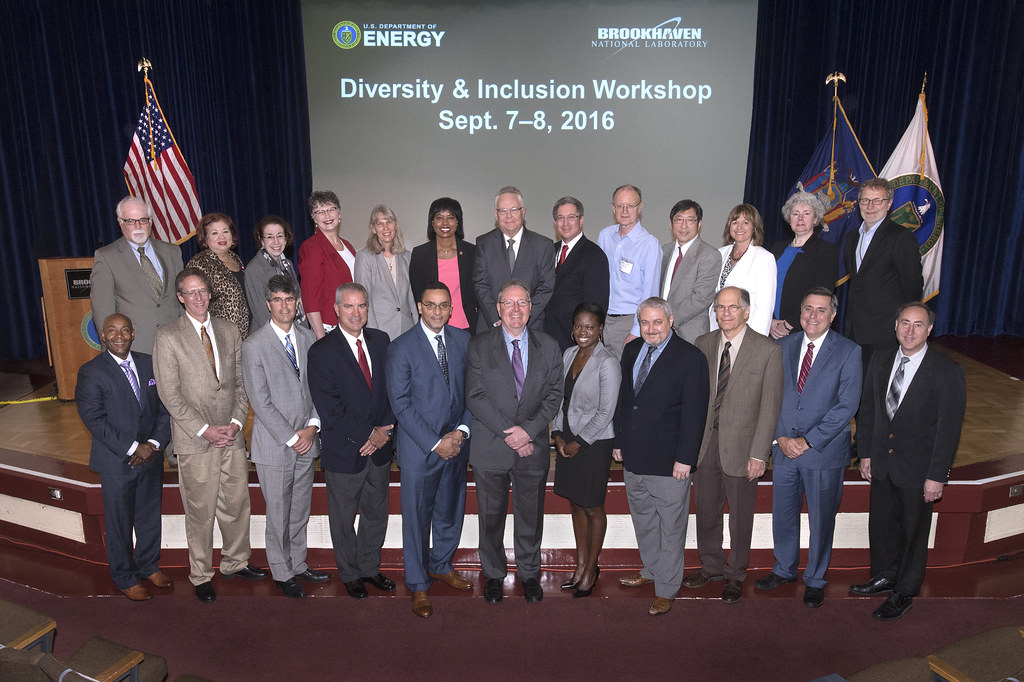 Photo slideshow: See many of the participants at the diversity and inclusion workshop held at Brookhaven Lab by clicking on the photo above.

The workshop included sessions, panel discussions, and networking events for all as well as meetings for the National Laboratory Directors' Council that consists of lab directors from all 17 DOE national labs, chief human resource officers, and diversity and inclusion managers from across the DOE complex. Some attendees also participated in a working-lunch session held for the My Brother's Keeper initiative, through which Brookhaven is collaborating with SUNY Old Westbury to engage students from diverse, economically challenged high schools across Long Island and show them the exciting possibilities available through careers in STEM fields.

Excerpts from the Plenary Sessions

As Lab Director Doon Gibbs kicked off the workshop and welcomed attendees to the first plenary session, he said, "If you look at the kinds of problems we face, there is a very significant, underlying STEM component. There's never been a time when we needed a stronger, more diverse STEM workforce than we do now to attack these problems."

"We're not where we need to be, so, in part, this meeting is a call to arms to the Laboratory to focus on this issue and begin thinking about it at even a higher level," Gibbs said, while concluding his remarks.

Office of Science Deputy Director for Science Programs Pat Dehmer and scientist Esther Takeuchi, who holds a joint appointment with Brookhaven and Stony Brook University, then took to the stage, offering engaging personal reflections on their experiences.

As Dehmer spoke, she relayed DOE Office of Science Director Cherry Murray's message of thanks to all across the DOE complex, including the national lab directors, for participating in the workshop. She also delivered a challenge to the lab directors to develop well-thought-out plans for addressing diversity and inclusion—plans rooted in scholarly work, not anecdotal evidence, and driven by data with measurable outcomes while addressing the needs for each institution.

"People bring their own perspective from their life experience. Differences in perspective lead to different ways of looking at problems, so problems that have been intractable for a long time, when different people look at them, they see different solutions," Takeuchi explained. "Those solutions can be called creativity—which they are. They can also be called perspectives. It's critical to involve people who are nontraditional participants in the scientific process."

During the workshop's second plenary session, Lawrence Livermore National Laboratory Director Bill Goldstein moderated a panel discussion with four other national lab directors, who described progress at their labs since the diversity and inclusion summit held at Lawrence Livermore in 2015. Specifically, Chi-Chang Kao of SLAC National Accelerator Laboratory, Martin Keller of the National Renewable Energy Laboratory, Jill Hruby of Sandia National Laboratories, and Peter Littlewood of Argonne National Laboratory described what they're doing to address implicit bias—underlying biases we may not be aware of that affect decisions and behaviors—and they offered best practices, including diversity among leadership teams, tactics for recruiting and outreach, and climate surveys.

Brookhaven Lab's Chief Human Resources Officer Bob Lincoln then spoke, saying, "We're cheating ourselves of the richness and the value that we would have if we had a more diverse population with different perspectives, approaches, and thinking."

Shirley Kendall of the Lab's Diversity Office, Terrence Buck of Human Resources, and Ken White and Noel Blackburn of the Lab’s Office of Educational Programs presented on the strategy to increase diversity and inclusion at Brookhaven. That strategy, as they described, is built upon the Lab's Values and four pillars: enhancing leadership awareness; engaging Lab staff; fostering staff retention through the Lab’s mentoring program and work-life balance policies such as flexible work arrangements, and more; and expanding and developing talent pathways and the pipeline for national STEM workforce through many of the educational programs offered here.

The workshop then continued for the remainder of that day and the next with a number of breakout sessions, including Eric Sheppard of Hampton University presenting on Interdisciplinary Consortium for Research and Educational Access in Science and Engineering (INCREASE); Evelyn Landini of the DOE Brookhaven Site Office moderating a panel discussion to highlight DOE's Women @ Energy Series and e-Book with DOE's Amber Haggins as well as Alex Harris, Meifeng Lin, Triveni Rao, José Rodriguez, John Shanklin, Vivian Stojanoff, and Christina Swinson of Brookhaven. Caroline Simard of the Michelle R. Clayman Institute for Gender Research at Stanford University gave a talk on implicit bias, Steve Robbins of S.L. Robbins & Associates presented, “Your Brain is Good at Inclusion, Except When It’s not," and Rick Kittles of the University of Arizona gave a talk, titled "Race, Genetics and the Politics of Trust." Brookhaven Lab staff also hosted information sessions on the Americans with Disabilities Act Accessibility, Brookhaven's outreach to veterans, the Lab's mentoring program, and recognition and reward programs.