The 247 science research interns who came to the U.S. Department of Energy’s Brookhaven National Laboratory this summer found their way here from a range of backgrounds and worked with mentors in all fields of Brookhaven’s work.

Here are brief profiles of just a few. 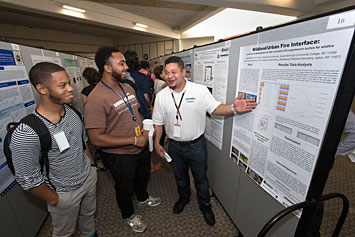 Jonathan Bernal (furthest right) explains his project to other interns

Before coming to Brookhaven National Laboratory, Jonathan “Jon” Bernal worked in the fanciest parts of New York City—SoHo, the Diamond District, Chelsea, Lincoln Center. He led teams of fire alarm system technicians through the buildings, teaching the new guys the fire codes and showing them how to test panels. He began pursuing a career in fire safety after discovering his passion for it as a volunteer firefighter in Nassau County. Now, Bernal, a transfer student from Queensborough Community College, is heading to the University of Maryland to get a degree in Fire Protection Engineering. He spent this summer as a Fire Protection Engineer intern with mentor Joseph Terranova. Bernal tested a sprinkler design to combat wildfires, assisted with updating the fire alarm systems from the former copper phone lines to new wireless communications, and evaluated fire road conditions to create a color-coded map outlining the needed repairs for trucks to access the forest to prevent or suppress fires. Impressed by Bernal’s professionalism and experience in the field, Terranova has invited Bernal to join him again next summer and recommended him for a technician position at the University of Maryland for the school year. 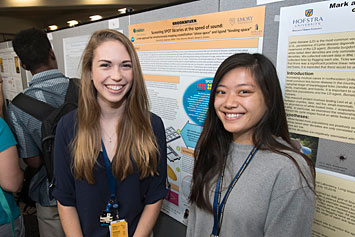 Millie Ma spent this summer with biophysicist Alex Soares developing new methods to harvest protein crystals — an essential step for collecting protein structure data. These methods can then be used to discover new drugs. To increase the quality of crystal diffraction data, Ma used sound waves to eject crystals onto baskets that absorbed the liquid surrounding the crystals. By growing four crystals per micromesh, Ma also increased the speed of crystal harvesting by more than ten times. This is not her first time in Soares’s lab. In high school, she had spent several months interning with him learning about protein crystallography and developing technical skills. A quantitative social science major with a concentration in biology and junior at Emory University in Atlanta, Georgia, Ma appreciates the in-depth introduction to crystallography and is drawn back time and time again to Brookhaven by the supportive, tight-knit environment Soares fosters in his laboratory. 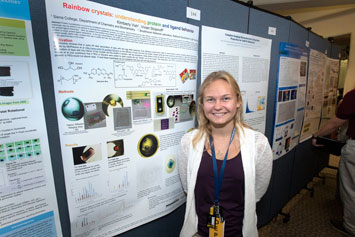 Kim Vish by her poster on protein and ligand behavior

For Kim Vish, science and music are intertwined. Not only did she play clarinet at the intern talent show this summer, she also first learned of the summer science research internship program while playing in a band with Brookhaven biologist Robert “Bob” Sweet. Now a sophomore biochemistry major at Siena College in upstate New York, Vish spent the summer studying protein crystal growth with physicist Vivian Stojanoff. She grew crystals of lysozyme, a protein that breaks down microbial cell walls, and dyed them with food dye to study how proteins interact with small molecules. She used several methods to grow the protein crystals, including electric currents, to find out how the electromagnetic fields affected the interaction between proteins and small molecules — the lysozyme and the food color — during crystal growth. To study the effect of electrical currents on protein crystallization Kim designed and printed special crystallization plates with her mentor, using a 3D-printer.

The demographic breakdowns of the 2016 summer science research interns by gender and race.