RHIC, AGS Users' Meeting Reflects on Past, Looks Toward Future of Nuclear Physics 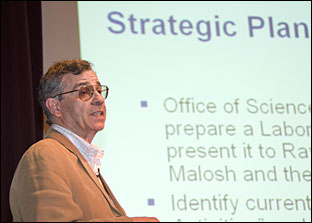 Participants in the 2008 Relativistic Heavy Ion Collider (RHIC) and Alternating Gradient Synchrotron (AGS) Users' Meeting got a taste of the rich history of nuclear physics at Brookhaven, as well as a glimpse of the future directions the Lab might take in the field.

Held May 27-30, the four-day meeting featured topical science workshops, recent results, updates on future projects, a special symposium on RHIC's impact on nuclear physics, an open forum to discuss users' concerns and ideas, and a panel discussion about diversity in physics.

The audience at the plenary session, held Thursday, May 29, was welcomed by RHIC & AGS Users' Executive Committee Chair (UEC) Abhay Deshpande. His remarks were followed by presentations on the latest operations and detector results from heavy-ion and polarization collisions and an address from past UEC Chair Rene Bellwied (Wayne State University). Bellwied gave a brief overview of the UEC's activities over the past year, which included involvement in establishing new cyber security and foreign national regulations, administering an on-site housing survey, making the case for the new BNL Caf&#eactute; in the Research Support Building, and participating in congressional visits.

Steve Vigdor, Associate Laboratory Director for Nuclear & Particle Physics, filling in for Laboratory Director Sam Aronson, then commented on BNL's strategic plan. In the 10-year map, presented to the Department of Energy in late April, the major activities set out for the Laboratory include photon sciences, collective quantum chromodynamics (QCD), energy, and physics of the universe. While detailing the individual projects for each Lab initiative, Vigdor stressed that it's important to understand that RHIC and the National Synchrotron Light Source II are not competitors, but rather "mutually supportive and both essential to the continued health of BNL."

He also noted that realizing the ambitious plan set out for the Laboratory will require science budgets consistent with the America Competes Act.

"It is critical for the scientific community to deliver a coherent, compelling message to the new Congress and administration regarding the long-term economic benefit of investments in science research and training, and of the importance of a long-term view, even in times of short-term economic crisis," he said.

The audience then heard updates from several funding agency representatives. First, Jehanne Simon-Gillo from the Department of Energy's Office of Nuclear Physics gave an overview of the strained budget situation. Appropriation levels have fallen consistently below the amount requested for the last few years, resulting in cuts to programs like RHIC, the Continuous Electron Beam Accelerator Facility at Jefferson Lab, and the Large Hadron Collider. Therefore, obtaining funding through the fiscal year 2009 budget request (which includes a 17.9 percent increase for the Office of Nuclear Physics) is extremely important for implementing a world-class nuclear physics program, she said. With this funding, RHIC operations would be increased to a 25-week run. 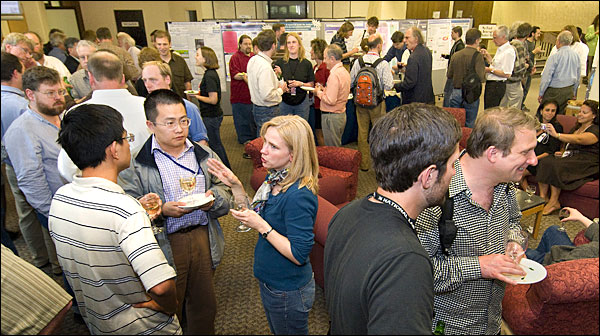 Participants at the 2008 RHIC-AGS Users' Meeting

"We've been told many times that nuclear physics has difficulty with staffers, administration, and the general public in articulating the significance we have on life and on society," she said. "The isotope program is a simple and clean case. It clearly tells a story about how nuclear physics plays a very important role for society."

Next, Brad Tippens, also from the Office of Nuclear Physics, offered perspective from the medium energy program, which includes three major scientific aspects: QCD with electron beams, QCD with proton beams, and precision measurements. Tippens echoed the budgetary concerns of Simon-Gillo, pointing out that funding for medium energy nuclear physics has been flat in recent years, with no adjustment for increases in the cost of living.

"The '09 funding situation will be bleak if we have a long continuing resolution," he said, adding that despite the factors stacked against the community, "hope springs eternal."

Ani Aprahamian, program director at the Nuclear Physics Division of the National Science Foundation (NSF), told the audience that NSF physics funding would receive an 18.8 percent increase through the President's request for 2009. Much of that increase would be used to restore funding to the National Superconducting Cyclotron Laboratory, at Michigan State University, as well as for research and education grants.

Aprahamian advised scientists to spread news of their work by sending abstracts to be added to NSF Research Highlights, either online or internally. She also gave NSF deadlines for proposals for new scientific initiatives, and provided an update on one of the NSF's top priorities - the Deep Underground Science & Engineering Laboratory, which is expected to start up in 2012. 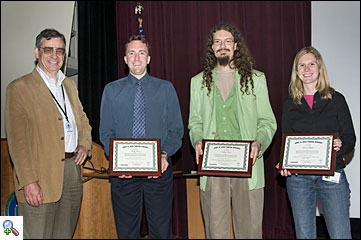 Although two awards are usually given, this year the judges requested and received additional funds from Brookhaven Science Associates to recognize three theses that were "clearly outstanding," Vigdor said.

The winners, who each receive a certificate and a $3,000 cash award, are:

Sarah Blyth (University of Capetown), who used the STAR detector to measure phi-mesons to probe the medium created in gold-gold collisions at RHIC. The judges were particularly impressed with the innovative approach Blyth used to extract the data from the very challenging high charge multiplicity environment of the STAR time projection chamber, Vigdor said.

Alan Dion (Stony Brook University), who used the PHENIX detector to measure energy loss and flow of heavy quarks in gold-gold collisions. Dion ended up with a striking and unexpected result, and his measurements made possible a direct extraction of the viscosity to entropy density ratio for the "perfect liquid" found at RHIC.

Benji Lewis (University of New Mexico), who was a participant in AGS experiment 949, which searched for a rare K+ decay that is an important test of the Standard Model but challenging to measure. Lewis found a number of programming errors and improved the analysis procedures. The judges were very impressed with the breadth of his work, which included all stages of the experiment, Vigdor said.

Awards also were given for the poster session winners -- Shusu Shi (Institute of Particle Physics) and Tai Sakuma (Massachusetts Institute of Technology).

See related story: "RHIC and Its Impact on Nuclear Science", a recap of the all-day symposium held at the RHIC AGS Users' Meeting.