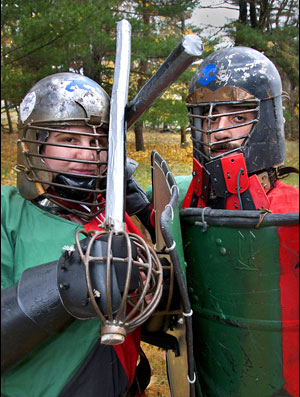 Lisa Soto and David Cortijo of the Information Technology Division have modern jobs but an old-fashioned pastime. When they aren't busy ensuring that the Lab's Unix and Linux computing systems are running efficiently and capturing scientific data, they spend their time pursuing medieval combat re-enactment.

Although the two work together, they did not become interested in medieval history at the same time. Soto, who started "costuming" in 1999, said she was first interested in recreating the clothing from that time period. She did extensive research and decided to create a persona representing an 11th century Lithuanian woman. "I costumed myself right down to the shoes and jewelry," she said. "Then, one day in 2003, I went to a medieval field tournament and watched the one-on-one combat and decided I really wanted to try it."

The sport is sponsored and governed by the Society of Creative Anachronism (SCA). According to their website, the SCA is dedicated to researching and recreating the arts and skills of pre-17th century Europe. Their "known world" consists of 19 kingdoms, with over 30,000 members residing in countries around the world. Participants, dressed in clothing of the Middle Ages and Renaissance, attend tournaments, art exhibits, classes, workshops, dances, feasts, and more. 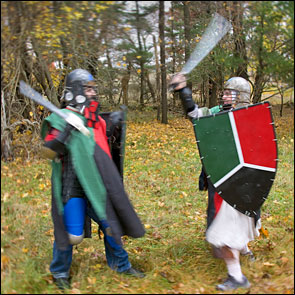 Cortijo, President of the local SCA chapter, became interested in medieval combat reenactment in 2003. "Participation in a field event is quite an adrenaline rush," he said. "But the costuming and the educational components are also important. There are a lot of rules of engagement to follow too, and the safety of others is always first."

In the United States, the groups are divided up into Kingdoms, Regions, Baronies, Shires and smaller groups. New York is part of the East Kingdom, and the local Suffolk County group is "An Dubhaigeainn" (a Welsh term roughly translated as "Black Abyss") because of its remote location in the East Kingdom.

Soto said the "Superbowl" of this sport takes place at Pennsic in Pennsylvania every summer. At that event, the East Kingdom squares off against the Middle Kingdom with nearly 2,000 participants on the field. "When I'm out there, I can literally feel the hair on my arms stand up and my adrenaline start to rise," she said. "After a day of combat we all kick back and have dinner by candlelight and talk and laugh about the events of the day. You feel like you've been transported back in time. It's a great feeling of camaraderie." 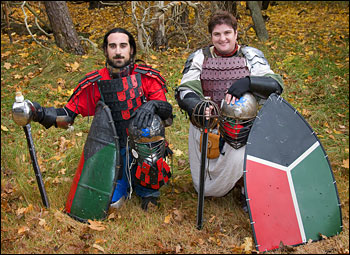 But don't be fooled. The camaraderie only happens after the combat has ended and a winner has been declared. Participants fight for their Kingdom, as well as for the title of King or Queen. They use rattan swords and protective body armor. Combatants can hit inside the general shield area. For example, attacking the hands, knees, or lower legs is not allowed. "If you are 'taken down' by a warrior you must die defensively -- place your shield over your head, lie down on the ground, and curl up into the fetal position," explained Cortijo.

Soto and Cortijo agree that their unique pastime is more "recreation" than "re-creation." But who knows? Perhaps one day one of them will reign as Baron or Baroness of the Black Abyss.

For more information on medieval re-enactment go to: www.sca.org.