The root of a popular tree (magnified 1000X) colonized by endophytic bacteria containing a green fluorescent protein to mark their presence. Equipped with metabolic pathways that enable them to degrade environmental pollutants, these microbes can increase the plants effectiveness in phytoremediation. (Click image for hi-res version.)

UPTON, NY - Using plants to soak up and degrade environmental pollutants, a strategy known as phytoremediation, can be more successful in theory than in practice - the accumulated pollutants or their metabolites sometimes kill the plants or evaporate via the leaves back into the atmosphere. But scientists at the U.S. Department of Energy's Brookhaven National Laboratory and their collaborators in Belgium think they've found a way to improve the process: transfer genes from pollutant-degrading bacteria into bacteria residing in the plants. They describe their proof-of-principle experiment, in which test plants inoculated with the "beefed-up" bacteria increased the degradation of toluene, in the May 2004 issue of Nature Biotechnology, available online April 11.

"By introducing genes for the appropriate degradation pathways into natural plant-dwelling bacteria, known as endophytes, we should be able to tailor-make plants capable of cleaning up a variety of organic pollutants," said Brookhaven biologist Daniel (Niels) van der Lelie, one of the lead authors on the paper. He also envisions introducing pollutant-degrading pathways into bacteria that live in crop plants to reduce the residues of pesticides and herbicides that make their way into our food.

Van der Lelie maintains that the technique should win widespread acceptance because it uses only naturally occurring bacteria and natural gene-transfer methods.

The scientists started with a type of bacteria that naturally colonizes the roots and stems of their test plant, yellow lupine. They mixed these bacteria with a related soil-dwelling strain known to degrade toluene. This allowed the strains to share genetic material through a natural process known as bacterial conjugation. 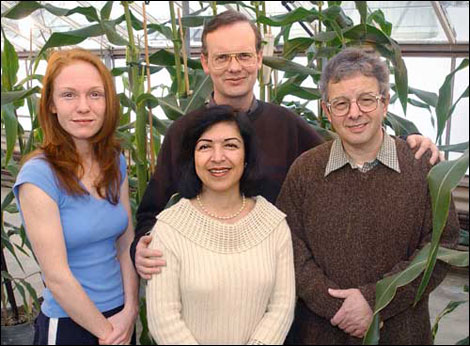 They then selected for the endophytic bacterium that had acquired the capability to grow on toluene, and used this strain to inoculate yellow lupine plants. After allowing the inoculated plants to grow for 21 days, the scientists analyzed the bacterial content of their roots and shoots using selective growth media containing toluene to confirm plant colonization by the so called "ENDEGRADER" bacteria.

The scientists then compared the ability of these plants to grow in an environment containing toluene (both hydroponically and in non-sterile soil in greenhouse studies) with that of non-inoculated plants and plants inoculated with the soil bacteria. They also measured the amount of toluene released from the plants' leaves via evapotranspiration. 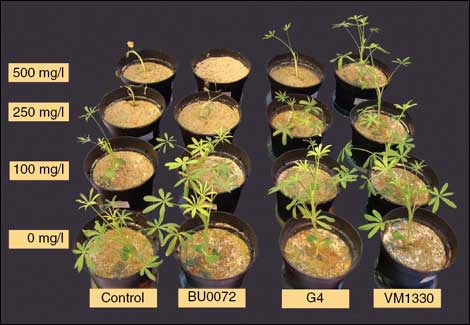 This photo shows the results of a variety of test conditions in the current study. The labels on the left show the varying concentrations of toluene tested from 0 - 500 micrograms per liter of water. The labels along the bottom show which strain of bacteria was used for each row: a control with plants to which no bacteria were added, plants inoculated with natural endophytic bacteria (BU0072), plants inoculated with the soil bacteria capable of degrading toluene (G4), and plants inoculated with the newly developed strain of endophytic bacteria that had acquired the toluene degradation pathway via bacterial conjugation (VM1330). These last plants were still robust, even at levels of toluene that were toxic to the other groups, and were best at removing toluene from the soil.

"These results confirm our hypothesis that endophytic bacteria, when equipped with the appropriate degradation pathway, can help plants survive under conditions with elevated levels of pollutants, and improve the performance of plants used to remove these contaminants from the environment," van der Lelie said.

The next step will be to test the technique in poplar and willow trees, deep-rooting species already used in phytoremediation. "In trees, the time between the uptake of the pollutant by the roots and its arrival in the leaves can take several hours to days, allowing sufficient time for efficient degradation by endophytic bacteria in the plant tissue," van der Lelie said.

The scientists have already isolated 150 bacterial species that live as endophytes in poplar and are beginning experiments to see which will be most amenable to gene transfer. The bacteria containing the degradation pathways will be isolated from contaminated environments.

The collaborators on this research, which is part of the European Research Project ENDEGRADE, are from the University of Limburg (LUC) in Diepenbeek, Belgium, and the Flemish Institute for Technological Research (VITO), where Daniel van der Lelie and his wife Safiyh Taghavi hold joint appointments and where they initiated this research. The work was supported by the European Commission under the Fifth Framework Program, Quality of Life; the Ford Motor Company; and Brookhaven Laboratory discretionary funding.