UPTON, NY - Scientists at the U.S. Department of Energy's Brookhaven National Laboratory have released results from the first experiment at Brookhaven's Deep Ultraviolet Free Electron Laser (DUV-FEL), a facility that produces powerful ultraviolet laser light for research applications. The researchers investigated how gas molecules break apart when they are highly energized by the laser light - research that may offer insight into many fundamental chemical and physical processes that are based on molecule-light interactions, such as photosynthesis, radiation damage, and ozone formation. 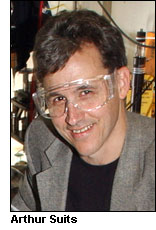 "This experiment has helped us to understand the specifics of what happens when we excite molecules with energetic ultraviolet light," said Brookhaven chemist Arthur Suits, the experiment's lead scientist. The results are described in the February 27, 2004 issue of Physical Review Letters.

"We also learn, more generally, how electrons rearrange in molecules in response to the light, the nature of chemical bonds, and the dynamics of bond-breaking processes," he said.

The gas used in this experiment is called methyl fluoride. Each molecule can be thought of as the sum of two parts: a negatively charged fluorine atom, or fluorine ion, and a positively charged methyl ion containing three hydrogen atoms bonded to one carbon atom. When Suits and his group aimed the ultraviolet beam from the DUV-FEL at a beam of methyl fluoride gas, the gas molecules each absorbed a single energetic photon, or tiny "packet," of light, which caused them to separate, or dissociate, into their positive and negative fragments, called ion pairs.

This dissociation is a special case, Suits explained. When a molecule absorbs a great deal of energy, normally it will spit out an electron and become a positive ion. But sometimes, molecules can temporarily exist in "superexcited" states, absorbing enough energy to ionize, but without doing so. Instead, they can dissociate into fragments. By studying the parts, scientists can gain information about the whole molecule and the details of the bond-breaking process.

In this experiment, Suits and his collaborators used a technique called "ion pair imaging" to learn about methyl fluoride's reaction to the light. After breaking the molecules into ion pairs, they tracked the motion of the fluorine ions by causing them to strike a screen that records each ion's impact location. The resulting pattern gives the scientists information about the speed and trajectory of the fluorine ions. By working backward, they can learn about the properties of the entire methyl fluoride molecule and its interaction with the light.

"Methyl fluoride was a good test case to use in the first FEL experiment, but we hope to study other dissociation processes," said Suits. "We have yet to take full advantage of the DUV-FEL's many unique features and capabilities, which will help us learn more about how electrons move in molecules as chemical bonds are changed and broken."

The DUV-FEL is located at the National Synchrotron Light Source (NSLS), a facility at Brookhaven that produces infrared, ultraviolet, and x-ray light by accelerating electrons in a circular path at very high speeds, but it does not work the same way. Instead, the electrons are first accelerated in a straight line down a linear accelerator (linac). They then pass through a "wiggler," a device that uses a series of permanent magnets to force them to "wiggle" in a wavy path. This wiggling motion causes the electrons to emit light.

The DUV-FEL is a very intense source of high-energy light pulses," Suits said. "But the FEL light has other unique properties. It is very coherent, or steady, and each pulse lasts less than one trillionth of a second. These short, intense "flashes" allow us to make very rapid 'snapshots' of brief molecular processes, such as chemical reactions, using the light. These are the kinds of experiments we hope to perform in the future."

The research was funded by the Office of Basic Energy Sciences in the Department of Energy's Office of Science, the National Science Foundation, and the Robert A. Welch Foundation.