UPTON, NY— By deciphering the near atomic-level structure of the catalytic domain of botulinum toxin type E - one of seven neurotoxins that cause botulism, a disease that paralyzes victims by blocking nerve cells' ability to communicate - scientists at the U.S. Department of Energy's Brookhaven National Laboratory are one step closer to a potential vaccine or treatment. Structures of the toxin and a related non-toxic version that differs by just one amino acid appear in the June 1, 2004 issue of the journal Biochemistry, available online May 8, 2004. 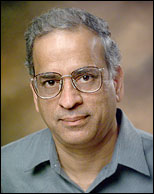 "Botulinum neurotoxins are the most toxic substances (by weight) known to humankind," said Brookhaven biologist Subramanyam Swaminathan, who leads the research team. "Because botulism is such a dreadful disease, and there are no current treatments, it creates great fear among people concerned about bioterror agents. That is why we are working so hard to understand the structures of the toxins and their mechanisms of action, so that this information can be used to design vaccines or drugs to combat the disease, and, almost as important, help mitigate the fear."

There are seven known varieties of botulinum toxin, types A-G. They block the release of neurotransmitters, the chemical messengers nerve cells use to communicate with one another and with muscles, by cleaving one of three proteins needed to release these chemical messengers. The Brookhaven team's work deciphering the structure of the part of the type E toxin that does the cleaving has also yielded information on the toxin's mechanism of action. In addition, by changing just one amino acid of this portion of the toxin protein, the scientists have created a form with essentially the same structure but with no toxicity.

"This achievement gives two opportunities for developing therapeutic agents," Swaminathan said. "First, because of their structural similarity, the inactive protein could be used as a potential vaccine; an immune response raised against it should also thwart the active toxin. Second, since the change in just one amino acid is sufficient to render the toxin harmless, it might be possible to design drugs that simply disable that amino acid to treat the disease.

"The results of this study, combined with the known structures of two other botulinum toxins - one of which was also determined by our lab - should help us understand the differences in their specificity and selectivity, and might even help us design a common inhibitor for all three or even all seven of the serotypes," Swaminathan said.

These "ribbon" diagrams illustrate the structures of the catalytic domain for wild type botulinum neurotoxin type E (left, fig. 1) and a related mutant protein (right, fig. 2). The overall conformation for the two proteins is the same; the only difference is that the amino acid gluatamate (GLU) in the wild type protein is changed to glutamine (GLN) in the mutant protein. This causes a loss of hydrogen bonding (shown by a dashed line in fig. 1) to the nearby nucleophilic water molecule, thereby increasing the distance between this water and the zinc atom in the mutant. This subtle change prevents the toxin from cleaving its target, thus abolishing its toxicity.

To decipher the toxin_s molecular structure, the scientists bombard crystalline samples with high-intensity X-rays produced by the National Synchrotron Light Source (NSLS) at Brookhaven, one of the most widely used scientific facilities in the world. By studying how the X-rays are diffracted as they bounce off or pass through parts of the crystal, the scientists can work backward to reconstruct the shape and arrangement of the atoms in the molecule.

The scientists also did experiments to test the ability of type E neurotoxin and their lab-made mutant to cleave the target protein that prevents neurotransmitter release during a botulism infection. They found that the mutant, which differs from the wild type toxin by just one amino acid, binds specifically to the substrate protein, but does not perform the hydrolytic reaction to cleave it, as the wild type does.

The structural analyses reveal a likely explanation for the loss of toxicity: The substitution of the amino acid glutamine for glutamate in the catalytic domain of the toxin does not change the overall structure substantially. But it does increase the distance between a zinc atom and a water molecule crucial to the cleaving process by a mere 0.6 angstroms (an angstrom is one ten-billionth of a meter). That subtle change disturbs the electrostatic properties of the molecule at the active site, making it unable to cleave the target protein.

These details about the toxin's mechanism of action may suggest a variety of ways to inhibit that action and render the toxin harmless.

There are no Clostridium botulinum bacteria at Brookhaven Lab. For this work, the scientists obtained the gene for the part of the type E neurotoxin that actively cleaves proteins, the catalytic domain. They then expressed this gene to produce this portion of the neurotoxin protein, which by itself is not toxic. This work is done in strict compliance with Brookhaven's Institutional Biosafety committee regulations according to standards set by the U.S. Centers for Disease Control and Prevention in Atlanta. Only authorized scientists have access to the laboratory.

This research was supported by the U.S. Army Medical Research and Materiel Command.