UPTON, NY — A research group led by a scientist at the U.S. Department of Energy_s Brookhaven National Laboratory has discovered a simple relationship that mathematically links the properties of a class of high-temperature superconductors, materials that, below a certain temperature, conduct electricity with no resistance. This new, unexpected law applies to superconductors with very different structures and compositions, and may provide clues to understanding the mechanism of high-temperature superconductivity. It is discussed in the July 29, 2004 issue of Nature. 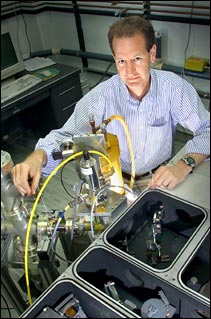 "Because this law unifies many different materials, it may allow us to predict the behavior of other superconductors, giving us deeper insight into how these systems work," said Brookhaven Lab physicist Christopher Homes, who led the research.

Homes focused on several members of a class of high-temperature superconductors known as cuprates, which are characterized by layers of copper oxide. He found a relationship between three of each cuprate_s physical properties: direct current, or dc, conductivity (how much direct current it conducts); critical temperature (the temperature below which it superconducts); and the "superfluid density" in the superconducting state. This last property refers to how many current carriers — electrons or "holes" (which are spaces in the electron sea that act positively charged) — are in the superconductor.

The new law, called a scaling relation, states that the superfluid density is proportional to the dc conductivity multiplied by the critical temperature. When the researchers plotted this relationship on a graph for each material and compared the shape of these plots, they observed that the overall result is a straight line.

The scaling relation applies regardless of each cuprate_s crystal structure, doping level (the amount of other elements, such as calcium or strontium, added to improve their performance), and type of disorder (how the crystal lattices are distorted by impurities). The relation also works regardless of the direction in which the properties are measured ­ parallel to the copper oxide planes or perpendicular to them. This is significant because, in a cuprate, the electric current only runs parallel to the copper oxide planes. Perpendicular to the planes, the cuprate acts much like an insulator, with very little current flowing.

"The fact that this scaling law makes a connection between the superconductivity in both directions, where the properties are very different, was surprising," said Homes.

Homes and his group studied each material using a wide range of light, from microwaves to ultraviolet rays. In some cases, they worked at the National Synchrotron Light Source at Brookhaven, a facility that produces infrared, ultraviolet, and x-ray light for research. They measured how much light is reflected away from each sample, a value called absolute reflectance. From this measurement, they calculated the properties used to determine the scaling relation.

"The beauty of this technique is that this simple measurement allows both the conductivity and the superfluid density to be measured without touching the material," Homes said. "It is amazing what you can learn about a material just by looking at how it reflects light."

This research is the result of a collaboration between researchers at Brookhaven Lab, the University of British Columbia, the Central Research Institute of Electric Power Industry (Japan), Stanford University, the Stanford Synchrotron Radiation Laboratory, the University of California at San Diego, and McMaster University. The research was funded by the Office of Basic Energy Sciences within the U.S. Department of Energy¹s Office of Science, the National Science Foundation, the Natural Sciences and Engineering Research Council of Canada, and the Canadian Institute for Advanced Research.