This briefing describes research to be presented at the 226th meeting of the American Chemical Society, September 7-11, 2003, in New York City.

Designing a Better Catalyst for

NEW YORK, NY - Scientists studying the conversion of carbon dioxide (CO2) to carbon monoxide (CO) - a crucial step in transforming CO2 to useful organic compounds such as methanol - are trying to mimic what plants do when they convert CO2 and water to carbohydrates and oxygen in the presence of chlorophyll and sunlight. Such "artificial photosynthesis" could produce inexpensive fuels and raw materials for the chemical industry from renewable solar energy. But achieving this goal is no simple task. 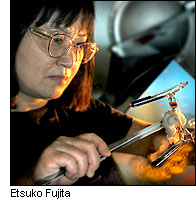 "Nature has found a way to do this over eons," says Etsuko Fujita, a chemist at the Department of Energy's Brookhaven National Laboratory. "It's very complicated chemistry."

Nature uses chlorophyll as a light absorber and electron-transfer agent. However, chlorophyll does not directly react with CO2. If you take it out of the plant and place it in an artificial system, it decomposes rather quickly, resulting in only a small amount of CO production.

So Fujita and others trying to mimic photosynthesis have turned to artificial catalysts made from robust transition metal complexes such as rhenium complexes. These catalysts absorb solar energy and transfer electrons to CO2, releasing CO. But until now, no one had explained how these processes work in detail. By studying these reactions over very short and long timescales (ranging from 10-8 seconds to hours), Fujita and her colleagues at Brookhaven have discovered an important intermediate step. A most intriguing result is the involvement of two energetic metal complexes to activate one CO2 molecule. Without CO2, the complexes dimerize much more slowly than expected.

The Brookhaven scientists' work, incorporating a combined experimental and theoretical approach, may help to explain why the reaction proceeds so slowly, which may ultimately contribute to the design of more efficient catalysts.

Fujita will present a talk on this work, which will be published in the Oct. 1 Journal of the American Chemical Society, during the "Organometallic Catalysis" session on Tuesday, September 9, 2003, at 2:30 p.m. in the Jacob Javits Convention Center, room 1A29. This work was funded by the Division of Chemical Sciences, Office of Basic Energy Sciences at DOE's Office of Science.