UPTON, NY - Scientists from the U.S. Department of Energy's Brookhaven National Laboratory and the University of Florida have uncovered information that may help "molecular wires" replace silicon in micro-electronic circuits and/or components in solar energy storage systems. The scientists were studying how electric charge is distributed in polymer molecule chains that are several nanometers, or billionths of a meter, in length. 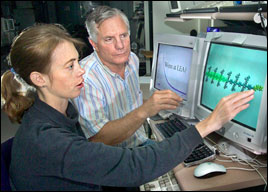 "Long molecules that can act as molecular wires, of which there are many variations, are one type of nanoscale object with the potential to lead to new technologies, due to their ability to conduct electricity and very small size," said Miller. "But unlike conventional metal wires, polymer nanowires need assistance in order to conduct."

"Using a cluster of high-energy electrons from an accelerator, we can quickly add an extra negative or positive charge to a polymer molecular wire. When the end of the wire contains a chemically-attached "trap" molecule, one where the electrons will be at a lower, more stable energy, the charge moves to it. This allows us to 'see' that the wires conduct electrons quickly, and over long distances."

One potential application for this finding is in the solar energy industry, particularly in a new field called "plastic solar." In conventional solar cells, incoming solar energy is transferred to the electrons in a semiconducting material, such as silicon, which knocks many of them loose. These electrons are guided to an electrode, creating a current that can be drawn off and used.

The plastic solar movement aims to replace materials like silicon with polymer nanowires, which are cheaper and lighter. Another advantage of plastic solar cells is their physical versatility. Due to the flexible, bendable nature of polymer materials, plastic solar cells could be placed in areas of greatly varying size and surface type. Conventional cells are rigid and costly, and the current production method limits their size.

In plastic solar cells constructed to date, electrons must jump from one polymer wire to another in order to reach the electrodes. But as the electrons leave one wire in order to jump to the next, they encounter barriers, which require larger amounts of energy to traverse than the barriers that hinder electron movement within typical nanowires. This slows down the electrons.

Miller and his collaborators want to learn how to eliminate the barriers. But first, they must understand how the electrons move within single polymer wires - the amount of energy the electrons need, for example. Later, this information can be used to choose the best polymer conductors and design structures for plastic solar cells.

The group observed electrons move down a polymer wire by immersing the wire in an organic fluid and shooting high-energy electrons through the fluid. The electrons were supplied by Brookhaven's Laser-Electron Accelerator Facility (LEAF), which accelerates electrons to high energies for research applications. The energetic LEAF electrons either kick away some of the fluid molecules' electrons or allow the molecules to give up "holes" - mobile, empty spaces that carry positive charge. As a result, the submerged nanowire receives one of these electrons or holes.

"This new method injects extra negative or positive charges into the wires and allows us to observe the charges quickly diffuse across it. This observation is a key step toward developing polymer nanowires that are good conductors," Miller said.

In the future, Miller and his group also plan to look for ways to increase the conduction efficiency of the wires.

This research was funded by the Office of Basic Energy Sciences within the U.S. Department of Energy's Office of Science. It was performed in collaboration with Alison Funston and Norihiko Takeda (Brookhaven Lab), and Kirk Schanze and Eric Silverman (University of Florida).