Note: This is an informational post only, not a Brookhaven press release.

Theorist has close ties to Brookhaven

Frank Wilczek, a professor and theorist at the Massachusetts Institute of Technology who has a longstanding relationship with Brookhaven Lab, has received the 2004 Nobel Prize in Physics with two other American scientists, David J. Gross and H. David Politzer. The men received the prize for their studies of the "strong" force, the force that binds together the particles inside atomic nuclei. 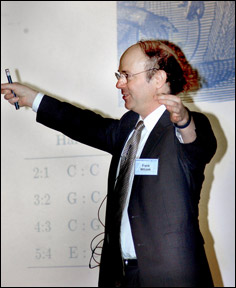 In 1973, Wilczek and his colleagues made an important discovery concerning the strong force, also known as the "color" force, which manipulates quarks, the tiny particles that make up protons and neutrons. The scientists found that the closer the quarks are to each other, the weaker the color force between them. This allows quarks very near each other to behave like free particles. Oppositely, as the distance between two quarks increases, the color force becomes stronger - much like how the tension along a rubber band increases the more it is stretched.

This discovery led to a new physics theory, Quantum Chromodynamics (QCD). QCD became an important part of the Standard Model, the theory that describes how all forces that exist between particles - electromagnetism, the weak force, and the strong force - are connected.

Armed with this new QCD theory, physicists were finally able to explain why quarks behave like free particles at very high energies, yet are bound in groups of two or three inside protons and neutrons.

Another direct result of QCD is Brookhaven's Relativistic Heavy Ion Collider (RHIC), which smashes gold nuclei together to learn about the forces and particles within. The major goal of the RHIC program is to create and study "quark-gluon plasma," the extremely hot, dense state of matter believed to have existed fractions of a second after the Big Bang. The possibility of such a state, in which quarks are not confined within protons and neutrons, is a prediction of the QCD theory.

Investigating QCD is also a major effort of many Brookhaven theorists, who use a supercomputer to simulate and study QCD interactions.

Wilcek's work as a theoretical physicist brought him to Brookhaven Lab several times. His first connection with the Lab began in 1976, when he worked as an Assistant Visiting Physicist from June to July. He returned in 1978 to serve on Brookhaven's High Energy Advisory Committee until 1982 and, during that time, also worked briefly as a Guest Research Collaborator in the Physics Department. Additionally, Wilczek was appointed a Leland J. Haworth Distinguished Scientist at the Lab from September 1994 until June 1997, and continues to frequently provide advice to Brookhaven scientists on an informal basis.