Venki Ramakrishnan to Give a Talk at Brookhaven Lab on 'The Ribosome: The Cell's Protein-Synthesizing Machine,' December 10

UPTON, NY - Venki Ramakrishnan of the Medical Research Council's Laboratory of Molecular Biology, Cambridge, England, will give a BSA Distinguished Lecture titled "The Ribosome: The Cell's Protein-Synthesizing Machine and How Antibiotics Disrupt It," on Friday, December 10, at 11 a.m. in Berkner Hall at the U.S. Department of Energy's Brookhaven National Laboratory. BSA Distinguished Lectures are sponsored by Brookhaven Science Associates, the company that manages Brookhaven Lab, to bring topics of general interest before the Laboratory community and the public. All visitors to the Laboratory age 16 and over must bring a photo ID. 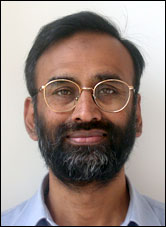 According to Ramakrishnan, the emergence of anitbiotic-resistant bacterial strains has made an understanding of antibiotic action and development of new drugs an urgent goal. Many antibiotics act on the ribosome, the biological "machine" in all cells that makes proteins using information encoded by genes. The ribosome was discovered 50 years ago, but, in 1999, breakthroughs were made in determining the atomic structure of the two subunits of the very large and complex ribosome at Brookhaven's National Synchrotron Light Source, which has specialized beam lines for structural biology. A year later, based on work done at several synchrotrons, the complete atomic structure of the two subunits of the ribosome was determined. Ramakrishnan and collaborators published the structure of the smaller of the two ribosome pieces, and a collaboration led by Yale University researchers published the structure of the larger piece.

Determining the structure of the ribosome has made it possible for Ramakrishnan and his colleagues to image antibiotics bound to the ribosome, leading to a better understanding of their action, which could help in the development of novel drugs. In his talk, Ramakrishnan will convey the excitement in the field that has arisen as a result of these discoveries.

After earning a B.Sc. in physics at Baroda University in India, Ramakrishnan came to the U.S. to further his studies, earning a Ph.D. in physics from Ohio University in 1976. He did postgraduate work at the University of California, San Diego, from 1976 to 1978, and at Yale University, from 1978 to 1982. Ramakrishnan joined Brookhaven Lab as an assistant biophysicist in 1983, rising through the ranks to become a senior biophysicist in 1994. In 1995, he joined the faculty of the University of Utah, and, in 1999, he moved to England to take on his current position as Group Leader, Structural Studies Division, Medical Research Council Laboratory of Molecular Biology.